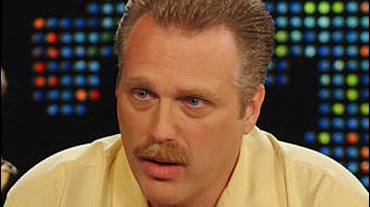 a nasty anti-Bush article by Michael Kruse, who used to be a political reporter at the Tampa Bay Times. The headline was “Jeb ‘Put Me Through Hell’: Michael Schiavo knows as well as anyone what Jeb Bush can do with executive power. He thinks you ought to know too.”

That's an odd spin for a man who fought for years to pull the feeding tube out of his own wife (and refused to grant custody of her to her parents) so he could get married to another woman. Kruse and Politico painted him as just an "average Joe" victimized by a "hard-right" Catholic-convert governor. (Ten years ago, Mr. Schiavo endorsed Democrat Tim Kaine for Governor of Virginia while expressing his revulsion for Jeb Bush.)

For years, the self-described “average Joe” felt harassed, targeted and tormented by the most important person in the state.

Michael Schiavo was the husband of Terri Schiavo, the brain-dead woman from the Tampa Bay area who ended up at the center of one of the most contentious, drawn-out conflicts in the history of America’s culture wars. The fight over her death lasted almost a decade. It started as a private legal back-and-forth between her husband and her parents. Before it ended, it moved from circuit courts to district courts to state courts to federal courts, to the U.S. Supreme Court, from the state legislature in Tallahassee to Congress in Washington. The president got involved. So did the pope.

But it never would have become what it became if not for the dogged intervention of the governor of Florida at the time, the second son of the 41st president, the younger brother of the 43rd, the man who sits near the top of the extended early list of likely 2016 Republican presidential candidates. On sustained, concentrated display, seen in thousands of pages of court records and hundreds of emails he sent, was Jeb the converted Catholic, Jeb the pro-life conservative, Jeb the hands-on workaholic, Jeb the all-hours emailer—confident, competitive, powerful, obstinate Jeb. Longtime watchers of John Ellis Bush say what he did throughout the Terri Schiavo case demonstrates how he would operate in the Oval Office. They say it’s the Jebbest thing Jeb’s ever done....

For Michael Schiavo, though, the importance of the episode—Bush’s involvement from 2003 to 2005, and what it might mean now for his almost certain candidacy—is even more viscerally obvious.

“He should be ashamed,” he said. “And I think people really need to know what type of person he is. To bring as much pain as he did, to me and my family, that should be an issue.”

But let’s explore some points the story conveniently omits or quickly passes over:

- He wasn’t exactly a loyal husband. Schiavo dated other women during her disability. Moreover, he lived with his “fiance” for years before and during the Terri Schiavo court fights, siring two children with her before Terri died.  Many would not hold that against him. But given those facts, I wonder who she would have wanted to decide her life and death: A man who had a family with another woman he couldn’t legally marry because of she was still alive or her blood family?

- He told a medical malpractice jury he would care for Terri for the rest of her life, continue to provide rehabilitation, and presented expert testimony she could live a normal life span. Once the money was in her account, he decided she wouldn’t want to live in  such a compromised state–a little matter he apparently forgot to tell the jury. Within months of the end of the legal case, he reportedly informed her father that there would be no further rehabilitation and tried to withhold antibiotics from Terri after she developed an infection, setting off the first legal fight with her parents.

- A guardian ad litem appointed in the original food and fluids case opined that Terri should not have her food and water removed. The trial judge dismissed the guardian at Michael’s request and never appointed another–contrary to Florida statutory law.

- Michael went years without filing legally required reports to the court about his plans for Terri’s future care. The judge didn’t mind. Such was the “rule of Terri’s case.” The usual standards did not apply.

- He told a court official in 1993–in the antibiotics case–that he had taken her wedding and engagement rings melted down and made into a ring for himself.

- He had her cats put down.

- Michael used Terri’s money, with the approval of the court, to prosecute the legal case culminating in her death.

- As Terri was dying of dehydration, she wasn’t even allowed ice chips in her mouth.

- And this one has been bothering me for years: Schiavo put these words on Terri’s tombstone: “I kept my promise.” Who puts an honorific about oneself on someone else’s tombstone?

The story contains examples of horrible and inexcusable threats made against Michael and his family–including slurs against his children. Those were evil and inexcusable. So were similarly vicious threats against her blood family, the Schindlers, for trying to save her life.