Eli Lake at The Daily Beast built on the big New York Times article on the weapons of mass destruction found in Iraq over the last ten years. The headline was "Insiders Blame Rove for Covering Up Iraq’s Real WMD."

Rove mysteriously wanted no waves made over WMDs, even as Democrats surged toward taking back majorities in the 2006 congressional elections.

In an interview with The Daily Beast, former Senator Rick Santorum said he and his staff began receiving photographs of discarded Sarin and Mustard shells from U.S. soldiers in 2004. Two years later, when he was up for re-election, Santorum even went public with some of this information in a press conference disclosing a Pentagon report that found 500 chemical weapons shells had been found in Iraq.

One might think a politically vulnerable Bush White House would’ve seized on Santorum’s discovery. After all, Bush and his subordinates famously accused Iraq of having active weapons of mass destruction programs. 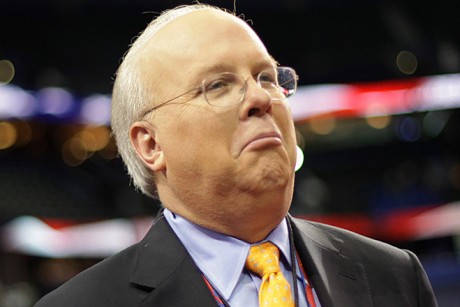 Dave Wurmser—who served at the time as a senior adviser to Vice President Dick Cheney on national security issues —remembers receiving a similar message from Rove.

According to Wurmser, “in 2005-6, Karl Rove and his team blocked public disclosure of these (findings) and said ‘let these sleeping dogs lie; we have lost that fight so better not to remind anyone of it.’”

At least part of the Bush administration’s case against Saddam Hussein was based on the fact that he never properly accounted for the chemical weapons stockpile he had built up in the 1980s. As Santorum himself said during his 2006 press conference the Pentagon’s report at the time “proves that weapons of mass destruction are, in fact, in Iraq.”

Santorum on Thursday stood by that claim. “There was no active chemical weapons operation in Iraq, that doesn’t mean there were no chemical weapons,” he said. “That was the point we were making. It’s clear from the New York Times article that the military as well as the administration didn’t want to have that conversation because they missed it.”

Santorum said that in 2005 he began raising the issue in 2005 with the White House himself. “I had discussions over a period of a year or two. Why aren’t we mentioning this? Why aren’t we doing anything on this?” he recalled. But Santorum later became so frustrated that by 2006, his message to the White House was: “I am going to do this [go public] whether you do it or not.”

Just like we’re seeing now – even with the imprimatur of the liberal New York Times – the networks tried to ignore the story. On MSNBC, Keith Olbermann mocked the find as "weapons of minor discomfort" and suggesting Senator Santorum was like Sen. Joe McCarthy, holding up a "blank page" of supposed communists in the government.

One explanation for why the White House was not interested was so as not to tip off Sunni insurgents in Iraq. As the New York Times reported this week, some of the main areas in Iraq that used to store chemical weapons is in areas now controlled by ISIS.

Wurmser said that in 2004 and 2005 “chemical weapons shells began turning up in arms markets in Iraq in small numbers, but eventually in batches of 100 or so.” He said that when he asked the U.S. intelligence community to go public with the information, they “quite properly asked it be kept quiet until they track down the source of the weapons so that they can secure it and not tip off Sunni insurgents to go and retrieve them themselves.”

Eventually, Wurmser said, Sunni insurgent groups did gain access to the shells in 2005. “There were to my memory at least two attacks on our soldiers using chemical-weapons rigged shells as (improvised explosive devices). Fortunately, they were ineffectively weaponized and soldiers were wounded but not killed.”

Wurmser, however, grew more frustrated over time. “After waiting a year—during which we asked that the source of the batches be traced and followed to the location where the shells were being retrieved—we continued to see the trickle, but then discovered nobody was making any effort to track the source to the location of retrieval,” he said. “Instead, we were continuing to try to buy up some of the stuff in the market.”

After the U.S. found thousands of the old chemical weapons shells, Wurmser and others at one point argued that they had an obligation to declare the stocks of chemical weapons under the Chemical Weapons Convention and destroy them. The United States was, after all, the occupier of Iraq and had assumed the country’s sovereign responsibilities as a signatory to the convention.

“It was all for nothing; Rove wanted the issue buried,” Wurmser said.

At the end of the day, Santorum said he would not call the White House behavior at the time a cover up, as was implied in the New York Times story. “I don’t know if I would use the term cover up,” he said. “I would just say they simply didn’t want to discuss it.”

What results followed in 2006? Dramatic Democratic victories, which certainly cut deeply into Rove’s reputation as an “architect” of Republican success. As Brent Bozell wrote on these findings on June 27, 2006:

[T]his memo packs an important rhetorical punch. How many hundreds of times have our major media told us there were "no weapons of mass destruction" found? And how many thousands of times have leftists jumped off that springboard to an elaborate Bush-lied-people-died jeremiad?

This discovery should be a crucial, corrective turning point to the stuck-in-2003, pre-war obsessives. The hardened historical narrative needs to be amended. There were WMDs in Iraq that could have been used against our troops or acquired by terrorists.

An honest, nonpartisan news media that cared about the facts without political calculation would have taken care to correct the record, even if the findings were comparatively underwhelming to the pre-war scenarios. A fair and balanced story could be done. But the reception of this declassified memo shows we do not have an honest, nonpartisan news media, and political calculation is everything....

The largest remaining mystery is why Team Bush seems allergic to releasing more information on the missing weapons in Iraq, and more facts out of the archives of Saddam Hussein's heinous regime. If they are acting, or better put, not acting out of intimidation by the media, who don't want any new information to change their tilted first draft of history, the polls suggest that inaction has damaged them dramatically.