PBS Pounds Panetta About Loyalty, Poor Timing of His Book; Didn't Do That to Scott McClellan in 2008

PBS NewsHour seemed upset at Leon Panetta's apparently questionable loyalties to Democrats from the beginning of her interview segment on Thursday. She incorrectly stated that Panetta served as "President Reagan's chief of staff." She meant President Clinton. (That's what the NewsHour transcript says, and it includes a correction note.)

She scolded Panetta (and other Obama administration officials) for daring to write memoirs before Obama concludes his presidency, wondering why they couldn't be loyal:

JUDY WOODRUFF: But you’re very candid in the book, Secretary Panetta, about points at which you think the president should have gone in another direction, should have worked more with Congress. I guess my question is, you know, the late Senator Daniel Patrick Moynihan said at one point, he said — he was a great devotee of history. He said, it was wrong. He said it’s harmful for people to write candid memoirs while the presidents they serve are still in office.

And yet you, Secretary Clinton, Secretary Gates have all written candid memoirs. Is it — is it that Patrick Moynihan is wrong, or does this president just not engender loyalty? 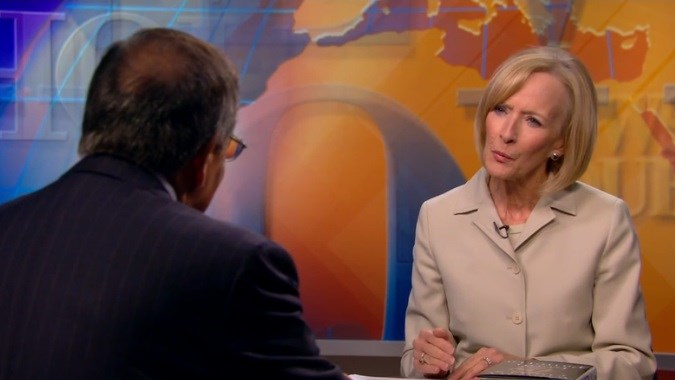 LEON PANETTA: No, it’s that, you know, we live at a time when I think it’s important to have a debate about these kinds of issues. This is a — this is a serious time in our history in 2014. It’s a serious time with regards to, what direction is this country going to take? We have got a Washington that’s largely dysfunctional in the stalemate. We’re not dealing with the principal issues facing this country. We’re dealing with a series of threats abroad.

This is a time to open up that debate about, what is it we need to do? What can we learn from the past? And how do we get together to provide the leadership that’s necessary to keep this country strong? I think that’s the right debate. And I think people ought to embrace that debate, because that’s what makes our country what it is.

But Woodruff was upset that Panetta is handing an argument to the Republicans at a very sensitive political time.

JUDY WOODRUFF: So we are four weeks away from the midterm election, and, right now, Republicans from Mitt Romney to Senate Republicans running in tight contests around the country are saying that — they’re citing you as proof that President Obama is weak. Do they have a point?

He’s been a president who really is trying to provide the right leadership for the country. That doesn’t mean that we shouldn’t talk or disagree about certain elements of the leadership.

But on May 30, 2008, the NewsHour interviewed former Bush press secretary Scott McClellan, and there was no Moynihan question about how he could harshly attack President Bush at a politically sensitive time. (McClellan, in fact, said in interviews he might vote for Barack Obama, but no loyalty question surfaced.)

Instead, PBS interviewer Jeffrey Brown suggested McClellan had waited far too long to betray the president and tell the “truth” about Iraq: “Sorry. But that leads to something that a lot of people are wondering here about why you waited to say it until now. Why not speak up when there was a chance to, if not change things, at least let people know that there was some what you`re now calling propaganda or misleading going on?”

Brown asked sympathetically about the personal attacks from Team Bush: “And let me ask you, briefly, a lot of these former colleagues have been very harsh since your book has started to come out. Are you surprised by the personal nature of much of the criticism?” McClellan replied “Yes. I mean, I expected some of the response that came, but some of it is surprising, in terms of how personal it is. I knew that the White House did not want me to go out there and openly look at my experience and honestly and forthrightly discuss what I learned from it.”

For a “rebuttal,” PBS turned to their pundit team of Shields and Brooks, and unsurprisingly, the pseudo-conservative Brooks laid in to the Bush team as stuffed with intellectual lightweights and Dubya-worshippers: 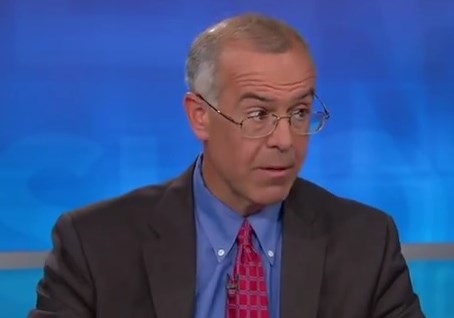 BROOKS: I read most of the book. And I found it -- no original stories, no interesting observations, cliche-ridden, and bland. And to me, it exemplified what the problem with the Bush administration was. There was spin, and God knows there was a lot of spin. But the real problem was there was no debate.

And so what you had was a culture without debate. And to me, nothing was ever tested. And you had a few people making the decisions, nobody asking questions....There was also an element of worship of the president of people like McClellan. They worshipped him, and they couldn't challenge him.