“This is a huge moment for Black women and girls all over the world – and for all of us,” she gushed. 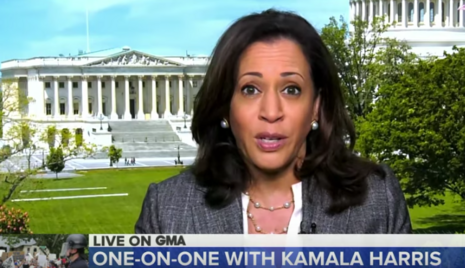 Harris has been the darling of Silicon Valley. Her campaigns for the senate and the presidency were well-funded by Alphabet, Google’s parent company, Apple, Microsoft, Google, and Facebook, according to OpenSecrets.org. But Harris is also an open advocate of online censorship. During her presidential campaign, she openly called for the ban of President Donald Trump from Twitter—several times.

“Look let’s be honest, @realDonaldTrump’s Twitter account should be suspended,” Harris tweeted in September 2019. Harris told CNN host Anderson Cooper in October 2019 that Trump should be “suspended” from Twitter. She said, “the privilege of using those words in that way should probably be taken from him.” Twitter responded by saying that the tweets Harris had reported, “do not violate our policies against abusive behavior, targeted harassment, or violence on the service.” However, since then, Twitter has found ways to censor the president.

Harris’s efforts to further censor conservatives did not stop with Trump’s Twitter account. In July, she and Sen. Michael Bennet (D-CO) sent a letter to Facebook CEO Mark Zuckerberg over the civil rights audit of Facebook. The letter said, “We share the auditors’ concern that Facebook has failed to use the tools and resources at its disposal to more vigorously combat voter suppression and protect civil rights.” Harris herself said, “It’s deeply unsettling that Facebook has the resources to vigorously combat voter suppression and protect civil rights—yet hasn’t acted.”

In an interview with Axios, Harris stated that she was in favor of putting rules in place that would punish tech companies who profited from “hate.” Later, that included holding tech companies “accountable” for allowing Trump to “abuse their platforms.”

In the Senate, Harris introduced the “Stop HATE Act,” which would “prevent online extremism from turning into real-life hate crimes.” She said, “The Stop HATE Act would require a serious study of the role the internet plays in fostering hate speech and influencing people to commit hate crimes. We cannot allow these horrific incidents to continue.” The Act would recommend actions to take online that would stop hate crimes “against individuals or groups of individuals on the basis of race, gender and gender identity, religion, disability, sexual orientation, ethnicity, color, or national origin.”

Tech companies don’t see a problem with Harris’s stance. If anything, their donations state their approval of her policies.

Sandberg wrote on Instagram on Aug. 11, “There’s no denying that Kamala Harris is ambitious – and that’s something we should be celebrating. Today, I am hopeful that many more Black women and girls will be inspired to run for office at every level. It’s only when everyone can compete and get a fair shot that we’ll get a government that truly represents all of us.”

Laurene Powell Jobs, the widow of Steve Jobs, tweeted, “Joe Biden you made a great choice!” LinkedIn founder and Microsoft board member Reid Hoffman (who funded a disinformation campaign in an Alabama special election) tweeted, “Congratulations to new #VPPick @KamalaHarris! And to @JoeBiden, for adding such a strong, experienced, and inspiring leader to the team.”