If Dan Snyder and the NFL don’t change the name of the Washington Redskins, people will die. At least that’s what Keith Olbermann ranted during his ESPN show Wednesday afternoon. How did he come to this conclusion? By comparing it to the Confederate flag, of course.

The liberal sports commentator claimed the Confederate flag directly “invoke(s) and encourage(s) racism, and violence, and madness, and murder, and treason,” and that it can “activate and enable evil.” And since the flag alone is clearly the main cause of racial violence in the south, it’s only logical to him that the legendary football team will cause the same chaos unless they change their name.

"We see that a symbol like a flag cannot only invoke and encourage racism, and violence, and madness, and murder, and treason, but it can do something even worse. It can represent evil, and represent genocide, and the persecution, and mockery of a people because of the color of their skin. 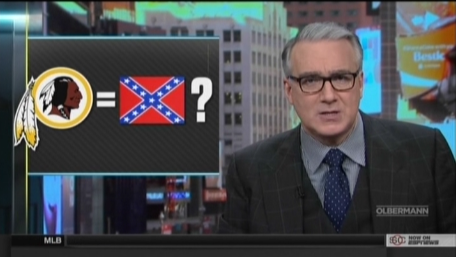 If a flag can do that, a football team name, beamed into our homes, our headphones, our minds everyday, it can represent the same kind of evil, the same kind of genocide, same kind of persecution and mockery of a group of people because of the color of their skin. There is a good reason Dan Snyder's lawyer did not tell the judge the name "Redskins" isn't offensive. That is because it is. And he knows it."

Olbermann made no effort to offer any evidence as to whether or not the name “Redskins” has actually resulted in widespread racial violence or discriminatory feelings. Although he did suggest all the Native American tribes and organizations who have spoken out in support of the team name are simply being paid off by the Redskins owner, Dan Snyder. Keith Olbermann is an excellent example of a liberal who makes an agenda-pushing claim, then refuses to let any common sense or facts get in the way.