Shocked CBS to Jim Webb: How Can You Run Against 'Juggernaut' Clinton?

The co-hosts of CBS This Morning on Thursday marveled at the very concept that someone would oppose Hillary Clinton in the Democratic primaries. Talking to newly-announced contender Jim Webb, Norah O'Donnell marveled, "But what's your path to victory? I mean, how do you run against a juggernaut like Hillary Clinton's campaign and what's your main argument against her being president of the United States?"

Co-host Anthony Mason was equally puzzled, asking the former Virginia senator: "Senator, you don't have a PAC and you don't want to seem to take PAC money. How are you going to be a contender in the race given how important money is now in politics?"

Citing a quote from Webb about America's foreign policy in general, O'Donnell kept the focus on Clinton:

A partial transcript of the July 9 CBS This Morning segment is below: 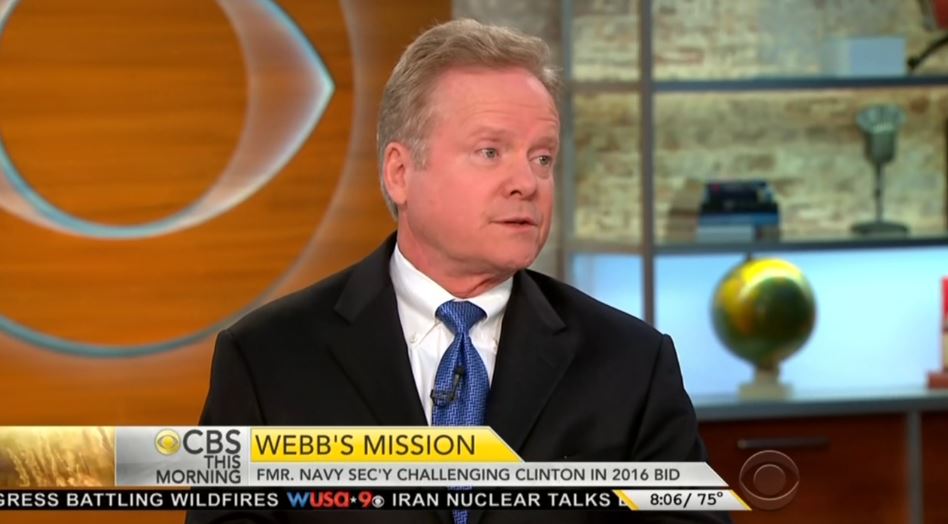 NORAH O'DONNELL: Former Virginia Senator Jim Webb is the latest Democrat to enter the presidential race. He wants a fresh approach to problem solving in Washington. Webb is a decorated Vietnam War veteran. He was secretary of the Navy under Ronald Reagan and most recently served one term as a senator. He joins us now for his first interview since announcing his candidacy last week. Senator, good morning and welcome to the race.

O'DONNELL: Off and running.

WEBB: We've been at the edges for several months. It's nice to be in it. 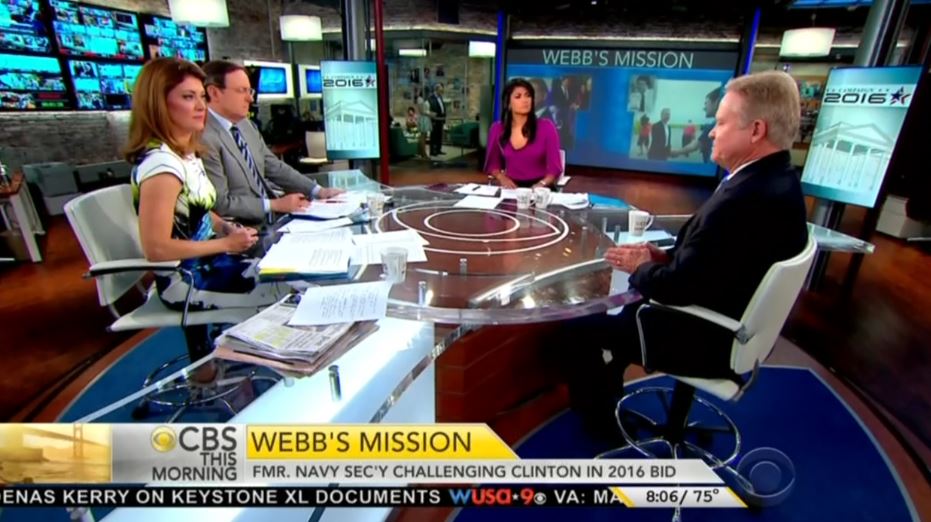 O'DONNELL: I want to ask you about some of the headlines of the day. We learned today that South Carolina is going to remove the Confederate flag. Are you glad to see it gone?

WEBB: Well, I think it's long been due to come down. The Confederate flag was a battle flag. It assumed a lot of unfortunate racist and divisionist overtones during the civil rights era. At the same time, I have been trying to reinforce we need to remember two other parts of our history. One is the very complex history of the Civil War itself where in John Hope Franklin's own numbers, the most eminent African America historian, only five percent of the whites in the south owned slaves and only 25 percent of the whites in the south had anything to do economically. While at the same time, there were four slave states that remained in the Union during the Civil War. Missouri, Kentucky, Maryland, and Delaware. And so, if you were a young person being called to duty during that period, this was a very complicated decision to make and we should remember that. And the other point –

O'DONNELL: Is that why you didn't call for its immediate removal after the church massacre?

WEBB: Well, actually, I did say that it didn't belong in public places, but what my concern was this would go beyond the issues of harmony and unity that we want to keep on the table and into issues that again divide us. I think we've seen a great sense of growth of unity in the American south since the civil rights era. And the south has never white against black, per se. It's always been a small veneer manipulating the emotions white against black for all these other reasons and we need to look at jobs. We need to look at education. We need to look at harmony, and bringing people together. That's what I hope we don't lose with this.

ANTHONY MASON: Senator, you don't have a PAC and you don't want to seem to take PAC money. How are you going to be a contender in the race given how important money is now in politics?

WEBB: Well, what I said is I don't have a super PAC. I don't want a super PAC, people can give us $2,700 or they can contribute to a PAC of $5,000. But with these super PACs, you could come and write a $27 million check. And my point has been if that ethically bothers you, then don't do it.  Just say you don't directly participate and a lot of these other candidates have actually, directly participated in this action that I think goes against the grain of what we are as a democracy.

O'DONNELL: But what's your path to victory? I mean, how do you run against a juggernaut like Hillary Clinton's campaign and what's your main argument against her being president of the United States?

WEBB: Well, I don't have a main argument against anyone who's running I think we should all put our issues on the table and let the American people decide. But I don't think you need two and a half billion dollars to become president of the United States. I think if you're going to get to a half billion, get people contribute in the right way. This super PAC concept – I've read Citizens United and it talks about independence. If you're going to have something like that, it should be independent from a political campaign and we're not seeing that. And if ethically that bothers you, don't say that you're going to support a constitutional amendment four years from now, just say you don't want to participate.

VINITA NAIR: You said that you're not against Hillary Clinton. So, I want to ask you about a specific comment. You said that the U.S. has not had a clear articulation of what American foreign policy is. Does that include the time that she was Secretary of State?

WEBB: I believe that since the end of the Cold War and particularly since 9/11, we have had a policy on situational ethics. I've been a strong proponent of how they can connect around the world. We are the guarantor of stability in East Asia. I've been talking about this since I was first over there and a Marine. I've worked as a military planner in east Asia. We led, I think, fairly, it can be said, we led this pivot to towards Asia, in our office, in our Senate office, two years before the President was elected.