MSNBC anchor Andrea Mitchell on Thursday encouraged Bernie Sanders to hit Hillary Clinton from the left, wondering if the self-described socialist senator found the Democratic nominee "credible" or "authentic." Mitchell carefully refrained from labeling Sanders a "socialist," but seemed to question Clinton's authentic liberalism: "Her campaign is supposedly going to raise a billion and a half dollars. Yet, she says she wants campaign finance reform and a constitutional amendment to limit campaign spending. Is that authentic?"

Mitchell again worried about Clinton's left-wing bona fides, reminding, "[Clinton has] come out very strongly against the wage disparity where CEOs and hedge fund executives are making such extraordinary amounts of money. Yet, she was obviously the senator from New York, the Senator from Wall Street."

The Andrea Mitchell Reports host wondered, "Does she have a problem here in being credible?" 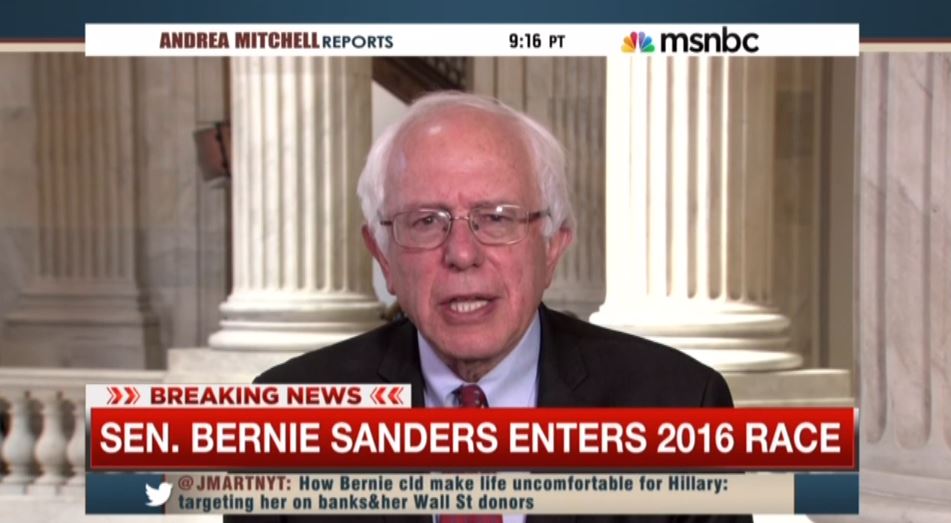 On Thursday, all three morning shows noted Sanders entering the race, but only NBC skipped the socialist label.

A transcript of the April 30 Andrea Mitchell Reports segment, which aired at 12:15, follows:

ANDREA MITCHELL: Senator Bernie Sanders making his first speech as a presidential candidate only moments ago at a news conference outside of Capitol Hill. The independent senator will run in the Democrat field in 2016. Yesterday, I caught up with the senator before his big announce to the talk about why. What is inspiring you to challenge Hillary Clinton, who is, of course, the front runner by everyone's accounts? 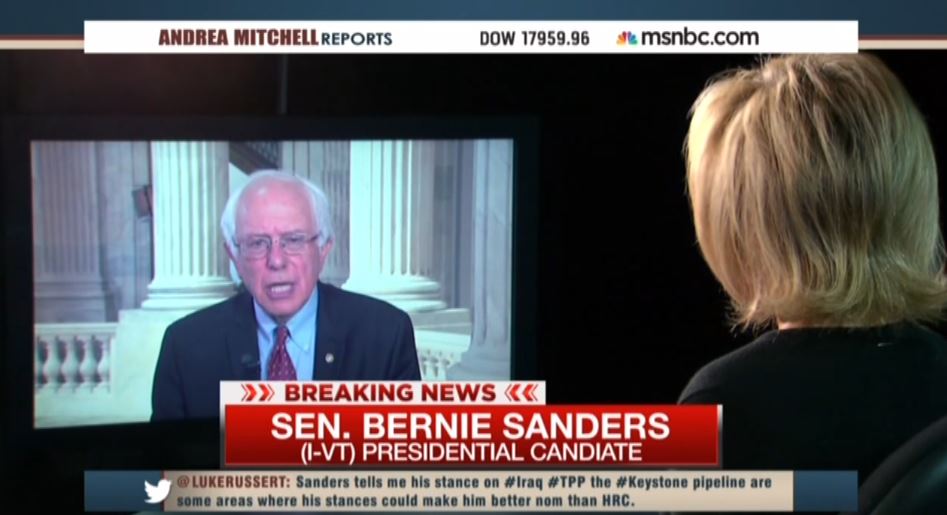 BERNIE SANDERS: Well, it's not taking on Hillary Clinton that's interesting. It's addressing the very, very serious crisis facing our country. Crises that have to be addressed. Look, for the last 40 years, the American middle class has been disappearing. We have people working longer hours for lower wages. And at the same time we've seen huge increase in income of wealth and inequality, such that the top one percent are now earning 99 percent of all new income generated in this country. And the top one tenth of one percent owns almost as much wealth as the bottom 90 percent. That's not what American economy should be about. And that spills over to, Andrea, campaign finance where billionaires, as a result of the Citizens United Supreme Court decision are literally buying candidates and buying elections and that's not what American democracy is supposed to be about.

MITCHELL: But Hillary Clinton says she's the champion of everyday Americans. Why isn't she the best standard bearer for the party?

SANDERS: Well, we'll let the American people make that decision. I have been working the last 25 to 30 years on behalf of working families. I have stood up and fought against disastrous trade agreements, for example, which have shut down plants in America and moved jobs to China and other low wage countries. I've been leader on the issue of climate change, against the Keystone pipeline. I have introduced legislation breaking up largest Wall Street banks, which today have so much economic and political power over the nation. So, I'm out there to defend real issues and I'm sure secretary Clinton will do the best to make her case and let the American people make their decision.

MITCHELL: Her campaign is supposedly going to raise a billion and a half dollars. Yet, she says she wants campaign finance reform and a constitutional amendment to limit campaign spending. Is that authentic?

SANDERS: Well, let me be – you'll be the first to know: We are not going to raise a billion and a half dollars. I think we can generate a reasonable amount of money through small donations. In the past, I have received a higher percentage of small donations than any member of the United States Senate. [Audio skip] –  are not going to be billionaires and we'll be heavily out spent.

MITCHELL: What about the money her campaign relies on from the same people that contributed to the Clinton Foundation? Do you have concerns about failures to disclose, about foreign money going into the foundation, the family foundation while she was Secretary of State?

SANDERS: Well, Andrea, I do. But I have a broader concern about the unbelievably horrendous role that big money is playing on all campaigns. I think raising questions about Secretary Clinton's funding is legitimate. But I think we have ask what the motives of the Koch brothers and Republican billionaires who, frankly, want to end Social Security, end Medicare, end Medicaid and give more tax breaks to billionaires.

MITCHELL: She's come out very strongly against the wage disparity, where CEOs and hedge fund executives are making such extraordinary amounts of money. Yet, she was obviously the senator from New York, the Senator from Wall Street. Does she have a problem here in being credible?

SANDERS: Well, look, this is an issue that I have been talking about for years. In the United States, CEOs make 300 times what their workers make and I think that is simply immoral and it's an issue that has to be dealt with. It's an issue part of legislation dealing with.

SANDERS: Well, that's a fair question. I've been elected in Vermont as an independent. But I'll be running, in a sense, as an independent Democrat within the Democrat primary process. And the reason is pretty simple. I am not a billionaire. To run outside of the two party system would require enormous sums of money and a great expenditure of energy and time just to get on the ballot. So, I think right now the best path forward to win this election, to raise the important issues that the American people are deeply concerned about, the need to create jobs, need for health care for all, need to deal with climate change. I can do that best running in the Democratic primary process.

MITCHELL: Will you support her if she does turn out to be the Democratic nominee?

SANDERS: Well, that's premature and see what happens. But I will most certainly not be supporting right-wing Republican candidates. That's for sure.