CNN anchor Chris Cuomo has aggressively attacked those who support Indiana's religious freedom law and on Thursday night he brought on Charles Barkley to slime Christians as "religious nuts." The former NBA player, who is from Alabama originally, sneered, "All these rednecks hide behind the Bible. That's what they do. That's one of the reason the south is behind in everything. They always hide behind the Bible. It's strictly about discrimination."

Complaining about the lack of gay people invited to discuss the Indiana law, Barkley lamented, "We got some of these religious nut jobs" speaking out. Cuomo did not interrupt or challenge the sport star's hateful attack on the "nut jobs." Instead, the anchor asserted that his show had featured plenty of gays.

Cuomo introduced Barkley with awe: "Now he says he knows discrimination when we see it. And he sees it in this religious freedom laws." The anchor described Barkley as part of the "impressive combination of business, sports" and others fighting the law. 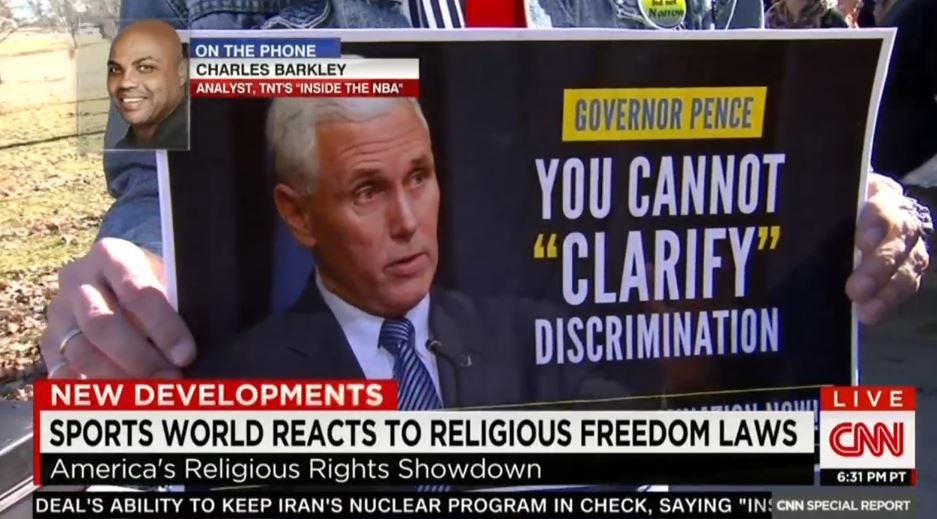 The best Cuomo could do is to briefly play devil's advocate:

CUOMO: Now they say it's about the government discriminating against them, not them discriminating about anyone else. They say that that this is a false narrative, that this is the left just pilling up on the religious and it's the next step in assault against faith in America.

This is the same Cuomo who said that resistance to gay marriage is "about discrimination."

In 2008, CNN brought on Barkley to rail against "fake Christians."

A partial transcript of the April 2 segment is below: 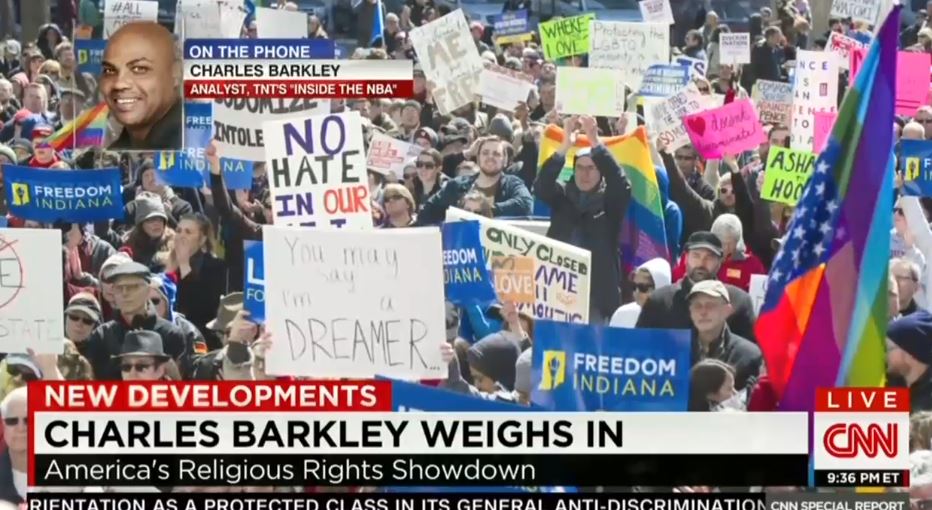 CHRIS CUOMO: In just past week would started as a kind of quite discrete state law being past just blow up into a national situation, even involve NBA legend Charles Barkley. Now he says he knows discrimination when we see it. And he sees it in this religious freedom laws. He became part of this impressive combination of business, sport and state to push back, he joins us now by phone. So Charles, thank you very much for joining us. Mr. Barkley, always a pleasure. Let me ask you why did you get involve with this?

CHARLES BARKLEY, NBA LEGEND: Well I think anytime you see discrimination you have to stand up for it because, you know, they're make this strictly about gay rights. But what next if they have Muslim customer coming there or they have somebody who come in on a military and they're against war. I think we have to really be careful because any form of discrimination you have to check it.

CUOMO: Now they say it's about the government discriminating against them, not them discriminating about anyone else. They say that that this is a false narrative, that this is the left just pilling up on the religious and it's the next step in assault against faith in America.

BARKLEY: Listen, I don't think gay people went out to try to go after, they came out as a gay people let get that straight. I don't -- I think that's absurd. And listen, don't try to make this thing about the left or the right. That just politicians pandering to their group, trying to get elected.

This is just about discrimination. Listen, I saw your story about -- if those people just want flowers, they're not trying to trick you into their gay lifestyle spouse, they just want flowers. And love it, you know, typically of the south where I'm from, all these rednecks hide behind the Bible. That's what they do. That's one of the reason the south is behind in everything. They always hide behind the Bible. It's strictly about discrimination.

CUOMO: Well you know growing up in the faith the Word is the truth. And that's what the Bible is and the Bible says that this is sin specifically in the Old Testament specially. And you're asking them to participate in sin, which makes them as bad as the sinner.

BARKLEY: Well, I thought that was interesting the little flower girl talks about -- you ask her about adultery and different types of sins, she put that over a whole separate category. So they want to have selective about their sins. That's another example why they're full of it. They have selective their amnesia, they don't -- they just like gay people. I wish they would just say that. And let me just this: If they want to be like that, I think they have the right to be like that. I think the biggest problem I have, we as a country or have state of Indiana, they make it a law. You have the right in this country to be against gay marriage, but it can never be against -- they can't put it on the books. That was my biggest problem with this whole thing.

Nobody would say let me be gay so I can't eat at certain restaurant. Nobody is going to serve my wedding or my commitment ceremony. Nobody would choose that. But listen, let's don't –, this is about discrimination. And I know you said blacks are -- first of all, I don't -- we can't act like racism does not exist now. Let's don't act like racism doesn't exist. But I think if you open up this kind of can of worms, it just to opens up, they can say obviously, they can say I'm going to serve black people. I'm not going to serve Hispanics. I just think you have to really be careful when it comes to discrimination. But it just fits what you want it to fit.

CUOMO: LGBT is particularly vulnerable though because they don't get the protection that other specific minority groups do. And ironically...

BARKLEY: Chris, Chris, you know, why?

BARKLEY: I've been following the story a week, you know, the one thing I haven't seen on all these networks all week is gay people. And see, that's the problem. We got all the straight people. We got some of these religious nut jobs, I might add. But we got all straight people discussing gay problems, issues. That why the system is wrong, that's like a bunch of white guys getting around trying to make a law for black people unless you had black people in the room or like gays in the room. That's the problem with this whole thing. We got a bunch of straight people trying to make law over something that we don't really know anything about.

CUOMO: I understand your point. One, you're assuming all these people are straight who're passing these laws, we don't really know what's in their heads and hearts other than support for the law. Two, we talk to a lot of people who're hetero and homosexual about these issues. Charles, you guys are watching my show in the morning it's called New Day. And we talk just the head of GLAAD right now.