Liberal MSNBC anchor Ed Schultz on Tuesday predictably went on the offensive, dismissing interest in Hillary Clinton's e-mail scandal as nothing more than a "Benghazi witch hunt part 2." He introduced a segment on the topic by explaining that, as Secretary of State, Clinton used a personal e-mail account. Schultz sneered, "I got one word for you here, Benghazi."

He frantically wondered, "How do we turn back a Benghazi witch hunt Part 2? I mean, this plays right into the Clinton haters' hands, doesn't it?" Talking to Democrat Jennifer Granholm, he queried, "Do you think this will rile up Hillary's base and [make them] realize that she still the big target?"

Talking to DNC member Mitch Ceasar, Schultz offered this softball: "...Is this a problem for Hillary Clinton?"

On Tuesday, Chris Matthews echoed this sentiment, dismissing the controversy as no big deal.

A partial transcript of the Ed Show segment is below: 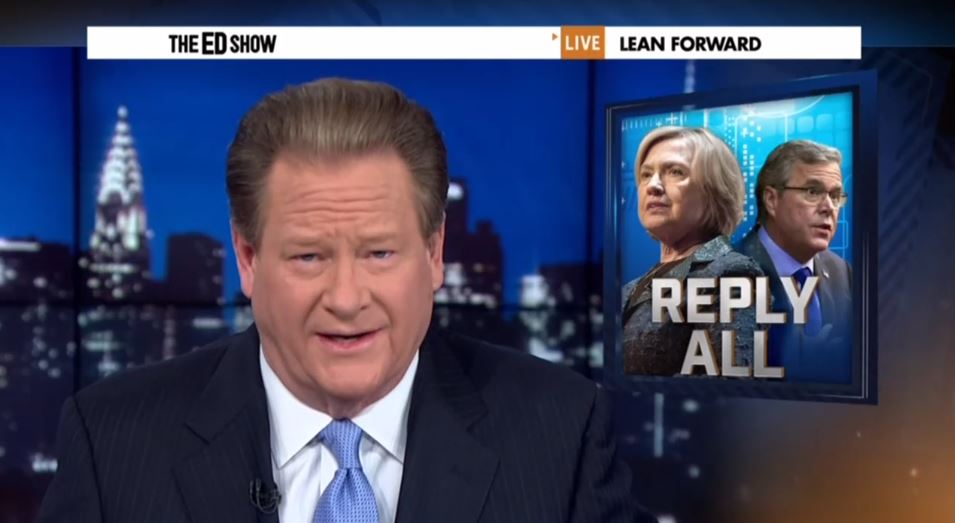 ED SCHULTZ: Now, Clinton is being questioned for the use of her personal e-mail account while she was Secretary of State. I got one word for you here, Benghazi.

GOWDY: Despite some attacks from those who claimed that all questions regarding Benghazi have been asked and answered, the revelation of Secretary Clinton uses her personal e-mail account solace (ph) that claimed there.

SCHULTZ: I mean, it just so predictable. This morning in our meeting as I said, one this dude from South Carolina come out and get after it. You know, I'm surprised the Republicans haven't called for full investigation on this already. Michael Schmidt, the reporter who brought story was on MSNBC just a short time ago.

MICHAEL SCHMIDT, THE NEW YORK TIMES: If she wasn't using a government account in the State Department had no way of cataloging and retaining all of her e-mails, for record keeping purposes, for congressional oversight, for freedom of information act request and for historians to go back and look at it. So essentially, it was shielding her communications from those things.

SCHULTZ: And of course, not missing the opportunity, Jeb Bush weigh in on Twitter. He wrote, "Transparency matters. Unclassified Hillary Clinton e- mails should be released. You can see mine, here" Joining me tonight in our Rapid Response Panel Caroline Heldman she is a Professor of Politics at Occidental College and also with us tonight, Mitch Ceasar, DNC Executive Board Member. All right. The unvarnished truth from both of you. Mitch, you first, is this a problem for Hillary Clinton?
...

SCHULTZ: But the appearance is -- looking at it from the way the conservatives are, the appearance is that she's hiding something, Caroline. That this is just makes it a heck of lot harder for them to navigate and found out exactly what she was dealing.

SCHULTZ: So, Mitch, how do we turn back a Benghazi witch-hunt Part 2? I mean, this plays right into the Clinton haters' hands, doesn't it?
...

SCHULTZ: Well, Congressman Darrell Issa released a statement criticizing the fallout saying "The reason it matters is simple. It is the law." What's you're reaction to that?

SCHULTZ: And you know what? I'm a Hillary Clinton fan. I think she done a lot for this country in her life and she's been a great servant. But in putting the number on it, 50 -- she released 55,000. Now, a good reporter would come back and say, "Yeah, but is that all of them? Is there 57,000 or maybe 2,000 out there that we don't have that might be value? Now I'm not trying to impugn her character here. I'm just saying how the people would view this. Has everything single e-mail been released because that's really what's going to take to satisfy the right-wing?