CBS Quizzes Biden on Patriots Cheating, Not on Tax Increases

Joe Biden appeared on all three morning shows, Wednesday, to tout the President's call for new taxes. ABC and CBS both quizzed the Vice President on the process of getting new laws passed, but didn't offer much analysis on the tax hikes. Instead, CBS This Morning co-host Gayle King found time to wonder about the NFL playoffs.

King wondered, "What do you make of Deflategate, that 11 of the 12 balls allegedly that the Patriots used in that championship game were underinflated. What do you think of that, soft balls?" (According to Biden, as a former football player, he likes "a softer ball.") Charlie Rose hyped the State of the Union, touting, "Everybody's talking this morning about how defiant the President was. New York Times says "a bold call to action."

Rose imagined a conversation between Biden and Obama, wondering if the President said to him: "Mr. Vice President, we've won two elections. We didn't do so well in the midterms. The Republicans control the Congress. But let's go on the offensive. Let's pull it out and go right for the goals that we want."

In contrast, when co-host Norah O'Donnell interviewed Republican Congressman Kevin McCarthy, she chided him for policies that don't "address the income inequality."

Biden then went on a liberal, income inequality rant: 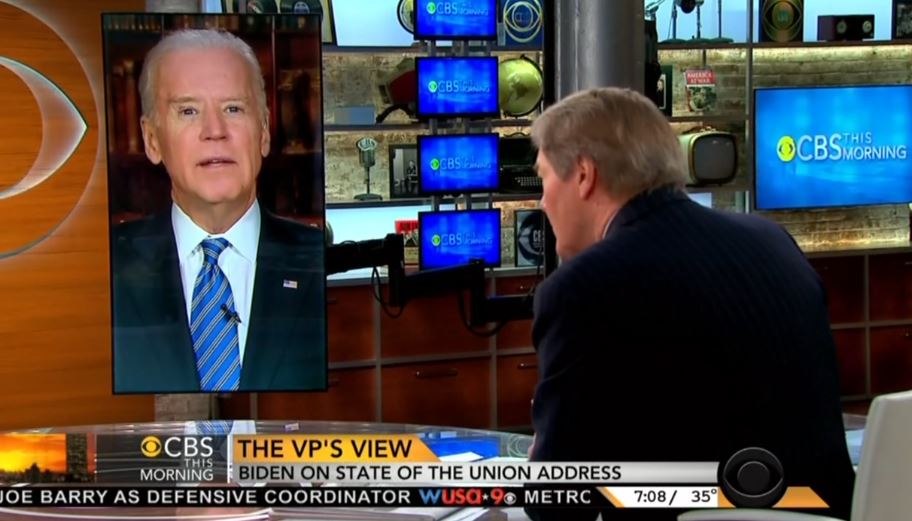 JOE BIDEN: Why should somebody be left $10 million in stock that, in fact, when they bought it now worth 50 million why shouldn't they pay tax when they inherited it? If you go out there, if someone is in the stock market and they, in fact, make $10 on a stock, that's a capital gain. You know, that's $210 billion and it's a real easy choice. You want to continue to help trust fund babies or go out or do you want to go out there-- good people -- those's not a pejorative term, last thing they need is another $210 billion tax cut...

Stephanopoulos didn't follow up. Instead, he changed the subject to a possible 2016 run for president.

On CBS, O'Donnell at least pressed Biden on foreign policy and Islamic terrorism: "But if you look at the map over the past three months, in fact ISIL’s gained more territory in Syria. Do we need to rethink our strategy?"

On NBC's Today, Matt Lauer offered a softball interview with Biden and accused the GOP of "disrespect and pettiness" during the State of the Union.

A transcript of the January 21 CBS This Morning Segment is below:

JOE BIDEN: Hey, Charlie. How are you doing?

ROSE: Let me begin with this. Everybody’s talking this morning about how defiant the President was. New York Times says “a bold call to action," even if no action is likely. Did the President said to you, “Mr. Vice President, we've won two elections. We didn't do so well in the midterms. The Republicans control the Congress. But let's go on the offensive. Let's pull it out and go right for the goals that we want.” Is there in his conversations with you a sense that we're going to be on the offensive for the next few years?

BIDEN: What the sense is, Charlie, and we work together closely is its time to talk about the middle class. Congressman Ernst just said the people have concerns. They have concerns about child care, they have concerns about good jobs. They have concerns about the fact that roads don't work in their area. They're concerned about attracting businesses to come stay. They're common concerns. Charlie, did you notice that when all the talk about the recovery finally having been solid, all the things the president said in the beginning of his speech including reducing the deficit significantly, have you noticed an awful lot of Republicans the last three weeks or four weeks are claiming to have caused the recovery? What caused the recovery were the programs that in fact we put in place. And all the president is saying is don't stop the momentum now. You're acknowledging there’s real momentum, now let’s keep it going, let’s get the middle class a better deal. And the prelude to this Charlie, as you were talking about, is taxing the rich. There's one tax that affects trust fund people. If you buy $10 million worth of stock if you're wealthy enough and you die and by the time you leave it to your heirs it’s worth $50 million, you pay capital gains except if you have that kind of money and you leave it in that circumstance. They pay no tax. So we're just saying, hey, look, what's more appropriate, to spend $220 billion and give middle class tax people a tax break or continue something that's of no productive value and not a single Republican can give you a good argument why there should be an exception to them paying tax on that.

ROSE: But they have the numbers and they control the Congress. Don't you need to reach out to them in a way --

BIDEN: I know that. Sure, we have.

ROSE: That says look we’re not just going to just present our proposal but we want to cooperate and find a common ground.

BIDEN: Look. I have met with the leadership. I have been having private meetings in my home. 17 Republican leading senators have already talked with me, I've invited them in my home. We’re having private conversations. They know what has to happen. What we have to do is keep the focus on the middle class. I believe the majority of the Republican Party still believes in the notion that we have to have the best trained people in the world to attract business and the best infrastructure in the world. They got a lot of outside pressure from particular interest groups just like the Democrats do. But if we keep talking about this, look, have you ever heard a Republican say, use the phrase middle class as much as you've heard in the last year? They get it. They get it. So the idea we're going to stay silent and not talk about the value system, I’m convinced they, in fact, agree on. I looked out at that chamber and, you know, I like Major a lot, but I saw the Republicans stand an awful lot.. I didn't -- I looked out and I saw a whole lot of friends in both parties. I like those guys.

ROSE: Let me get my colleagues in, Mr. Vice President.

NORAH O’DONNELL: Mr. Vice President let me ask you about foreign policy. One the big headlines last night is the president is asking Congress for an authorization of military force against ISIL. The president said last night to the American people that our military is stopping ISIL's advance, but if you look at the map over the past three months, in fact ISIL’s gained more territory in Syria. Do we need to rethink our strategy?

BIDEN: No. What we need to do is double down on our strategy. If you notice we're making progress against ISIL. They call it Da'esh in the region, in Iraq because in Iraq we now have a unified government. The Sunni Shia and Kurds are beginning to work together and they're losing ground. Losing ground.

O’DONNELL: Not in Syria, though, Mr. Vice President.

BIDEN: Let me answer. You asked me are we losing ground? We're gaining ground in Iraq. In Syria -- there are no boots on the ground. Syria is a dysfunctional country with nobody in charge. The fact of the matter is we're working with our Arab allies and European allies to begin to build coalitions to be able to take on both Assad and ISIL and it is a difficult process. It's going to take time. And there is no existential threat in the United States because of what’s going on there but there’s a threat in the region. We are making progress. And lastly, the president and I come from a school of thought that says the Congress has an equal say on war and peace. They should step up and say, okay, Mr. President, we agree with you. This is the authority you have to go after ISIL in this geographic area within this time frame. It's the best way to do business to get everybody in on the deal. That's why the president's asking for a new, what they call, you know -- an AUMF, that is, the authorization for the use of force.

GAYLE KING: Mr. Vice President, can I ask about the security at your home. You know, shots were fired at your home in Delaware. Luckily you and the family weren't at home. But are you concerned, the Washington Post is raising some troubling issues about security there, that there’s an issue with your system. Are you worried?

BIDEN: No, I'm not worried. First of all, my house is way off the road. Secondly, there’s no evidence it was shot at the house. They found shell casings over 100 yards length of--four shells, so a car must have been going by at a fairly high rate of speed. It appears someone on the passenger side fired a gun and my house is on the driver’s side, it’s about 100 yards away. There's no evidence of anything hitting the house. I'm not at all worried.

KING: Okay. So you don't think anybody's trying to get you?

BIDEN: No, I don't. At least not physically.

KING: Can I ask you, before we say good-bye, what do you make of Deflategate, that 11 of the 12 balls allegedly that the Patriots used in that championship game were underinflated. What do you think of that, soft balls?

BIDEN: Well, I’ll tell you what, having been a receiver, I like a softer ball. That’s all I can tell you.

ROSE: He must have been a wide receiver.

BIDEN: It’s good to see you guys thanks. Actually I was. I wasn't bad at it.