ObamaCare has yet another problem, but one wouldn't know it from the networks. ABC and NBC on Monday ignored a new Washington Post report finding that small businesses are not embracing the President's health care law. CBS This Morning covered the story, but only for a scant 15 seconds.

Anchor Charlie Rose revealed, "The Washington Post says small businesses are showing little interest in ObamaCare." He added, "The Small Business Health Option program's web page had 200,000 hits in its first week. One and a half million people visited healthcare.gov for individuals."

Despite the combined six hours of run time, NBC's Today and ABC's Good Morning America skipped the topic. Instead, Good Morning America devoted a minute and 39 seconds to a study on what the best dance moves for men are. The four-hour-long Today offered almost two minutes to debating what's the proper age difference for married couples.

A year after the Obama administration temporarily shelved an unfinished part of HealthCare.gov intended for small businesses, it has opened with reports of only modest technical flaws — but with doubts that it will soon benefit the millions of workers at little companies with inadequate health insurance or none at all.

Insurance brokers are, at times, having trouble getting into their accounts and, in scattered cases, are not showing up in the computer system’s lists of local insurance professionals available to coach small businesses. More broadly, interviews with brokers and others suggest that, in the two weeks since the marketplace’s health plans went on sale for 2015, interest within the niche they are intended to help seems scant.

During the first week, that part of HealthCare.gov drew 200,000 visits, compared with more than 1.5 million people who looked at the Web site’s health plans for individuals, according to the Centers for Medicare and Medicaid Services (CMS), the branch of the Department of Health and Human Services overseeing the online insurance marketplaces. CMS officials would not provide figures on how many small businesses in that first week decided to offer workers coverage through the health plans created for them — or how many workers, in turn, have bought it. 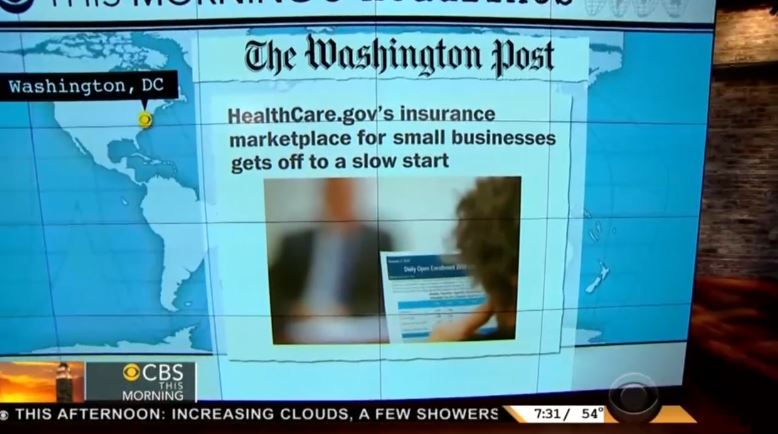 Monday's meager coverage follows a pattern for ObamaCare. In March, ABC, NBC and CBS cheered a "sign-up surge" for the health law. But when the administration announced that the number of people who enroll in the program will be "significantly lower by the end of next year," ABC, CBS and NBC ignored the downbeat forecast.

A transcript of the December 1 CBS This Morning segment is below:

CHARLIE ROSE: The Washington Post says small businesses are showing little interest in ObamaCare. The Small Business Health Option program's web page had 200,000 hits in its first week. One and a half million people visited healthcare.gov for individuals.