As Lewinsky Returns, ABC and CBS Gloss Over Clinton Culpability

All three networks on Tuesday hyped the return of Monica Lewinsky in the form of a speech on Monday, but ABC and CBS mostly glossed over the embarrassing details of Bill Clinton's culpability. Good Morning America kept the focus on the former White House intern and it was only at the very end of the segment that Jon Karl allowed: "Lewinsky's campaign against cyber-bullying just happens to be getting under way as we are about to start another presidential campaign featuring, probably, most likely, another Clinton."

On CBS This Morning, co-host Charlie Rose zeroed in on "the most famous White House intern in history." Journalist Michelle Miller played a brief clip of the President's "I did not have sexual relations" defense. Other than that, the prominent Democrat's name came up only when the New York Times's Amy Chozick's referred to "what happened between her and President Clinton."

It was left to NBC's Willie Geist on Today to cite the role of the other person in the affair. Speaking of Bill Clinton, he pointed out: 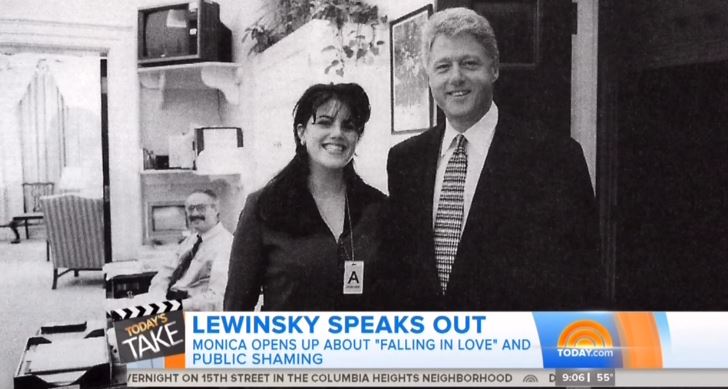 WILLIE GEIST: I don't excuse what she did, but she has paid her penance. I mean, it's been 16 years. And to her credit, she has laid low. She has been under the radar for the last decade or so. She -- I'm sure she had opportunity after opportunity to make money, be out in public, do a reality show, whatever she wanted to do. Again, I'm not excusing what she did but, let's remember, there were two parties to that event....One of them has gone on and been applauded and paid lots of money to speak to people and the other has been shamed.

[MP3 audio here.] In contrast, NBC on Monday night worried about the fallout for the potential Hillary 2016 campaign. Nightly News's Andrea Mitchell fretted that "the timing couldn't be worse" for the Clintons.

A transcript of the October 21CBS This Morning segment is below:

CHARLIE ROSE: And Forbes magazine says the most famous White House intern in history is stepping back in the spotlight, in herself first ever major public speech, Monica Lewinsky says she's finally found her calling. Michelle Miller is here to show us why Lewinsky is emerging after a decade of silence. Michelle, good morning.

MICHELLE MILLER: Good morning. Well, In a compelling and revealing speech, Monica Lewinsky proclaims she now wants to help victims of cyber bullying. She said she identifies with what those young people go through because she was one of them.

MONICA LEWINSKY: I fell in love with my boss in a 22-year-old sort of way.

MILLER: Monica Lewinsky says being at the center of a sex scandal turned her into a case study in cyber bullying even before the rise of social media.

LEWINSKY: I was patient zero, the first person to have their reputation completely destroyed worldwide via the internet.

BILL CLINTON: I did not have sexual relations with that woman.

MILLER: As the details of her sexual activities appeared on the internet, Lewinsky said she was filled with a deep sense of shame, contemplating suicide at times.

LEWINSKY: I would go online, read in a paper or see on TV people referring to me as tramp, slut, whore. Frankly I think it's disintegrating.

MILLER: Her speech, delivered at the Forbes Under 30 summit in Philadelphia, comes five months after she made similar revelations in an essay for Vanity Fair magazine. Taken together, they appear to be part of an orchestrated effort to reclaim her image.

AMY CHOZICK (NYT): Her name is so associated with what happened between her and President Clinton that it's going to be a real challenge to forge a different identity.

MILLER: Lewinsky cited the story of Tyler Clementi, the Rutgers student who committed suicide in 2010 after one of his intimate encounters was secretly streamed online by his roommate.

LEWINSKY: My mother was unusually upset by the story, and I wondered why. Eventually, it dawned on me, she was back in 1998, when I, too, might have been humiliated to death.

MILLER: By sharing her own experience, she says she hopes to help other victims.

LEWINSKY: Online, we've got a compassion deficit, An empathy crisis. And something tells me that matters a lot more to most of us.

MILLER: Before she gave her speech Monday, lewinsky joined Twitter describing herself as a social activist and knitter of things without sleeves.  Her first tweet was a simple one, #herewego. She already had more than 50,000.

GAYLE KING: Thank you Michelle. I predict she'll get more. I love her phrase, compassion deficit.

NORAH O'DONNELL: I agree with that.

KING: She decided to tell her story on her terms, because everyone's recovered, but Monica Lewinsky who was 22 at the time. So, here we go, Monica.

KING: Yeah. She's all grown up.