Joe Klein: Obama Is Cynical for Giving in to 'Ugly' Immigration Nativists 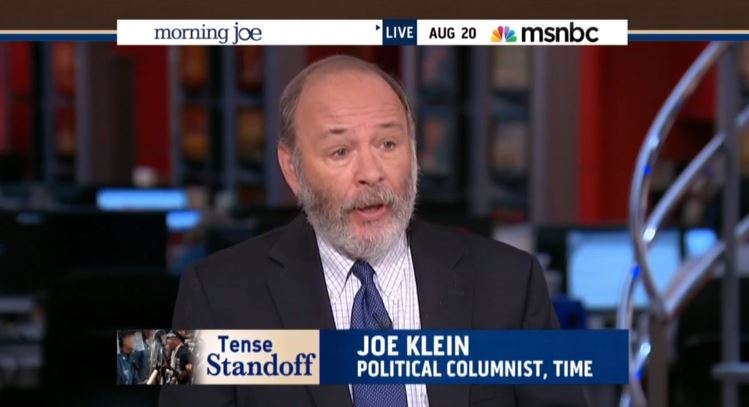 Time magazine's Joe Klein used the September 22 issue to knock Barack Obama from the left, decrying the "cynical" Democrat for giving in to the "ugly," nativist opposition to immigration. Denying any legitimate, philosophical opposition, Klein sneered, "For the first 190 years of U.S. history, opposition to immigration was mostly about religion–Catholicism and Judaism. For the past 50 or so, it’s been mostly about race–Mexicans and other Latinos."

He also made almost no distinction between legal immigration and illegal immigration, instead offering this label for opponents to the President's plan: "Nativists have always existed in both parties, and they’ve gotten particularly noisy over this ugly summer."

Nativists have won temporary victories in the past, but it has become clear that there are no limits to the basic American principle: the things we have in common are more important than the things that divide us.

The columnist critiqued Obama by bashing his critics as unhinged:

I report this decidedly unpleasant incident because it is pure distillate of the latest stage of anti-Obama paranoia. The first was that the President was not an American and was quite probably a secret Muslim. The second was that he was a socialist, trying to have the government take over everything–like health care–so that money could be transferred to the deadbeats. Now he’s trying to undermine American democracy by having all these furriners fake their way into our voting booths. The real news here, I think, is that immigration–not Obamacare–will be the hottest of buttons in the November elections. According to a recent Gallup poll, immigration is now the No. 1 issue for Republicans. A recent Kaiser Family Foundation poll found that only 3% of Republicans and 2% of Democrats thought Obamacare was the biggest problem.

Days after Klein's column, the New York Times  on Tuesday considered the terrorist threat of an unsecured border:

WASHINGTON — Militants for the Islamic State in Iraq and Syria have traveled to Mexico and are just miles from the United States. They plan to cross over the porous border and will “imminently” launch car bomb attacks. And the threat is so real that federal law enforcement officers have been placed at a heightened state of alert, and an American military base near the border has increased its security.

As the Obama administration and the American public have focused their attention on ISIS in recent weeks, conservative groups and leading Republicans have issued stark warnings like those that ISIS and other extremists from Syria are planning to enter the country illegally from Mexico.

Yet, according to Klein, only "nativists" oppose immigration.

Klein accused Obama of being "cynical" in his failure to offer executive action to resolve the border problem. The Time columnist probably isn't in the best position to judge cynicism. In 1996, he wrote a political novel called Primary Colors under the "Anonymous" pseudonym. Klein angrily and repeatedly lied in public, denouncing those who suggested he wrote the book.