Charlie Rose has repeatedly fawned over his "friend" Hillary Clinton, even reading a poem to her. But when Rand Paul appeared on CBS This Morning, Monday, Rose and his co-hosts grilled the possible 2016 presidential contender. Citing the Washington Post, Gayle King derided, "You were described as an isolationist..."

Norah O'Donnell also cited the September 14 Post story, highlighting "what they call your evolving views on some foreign policy issues." She also noted that in June, regarding ISIS, "you said 'I'm not sure where the clear-cut American interest is.' Then, now you're criticizing the President saying he should have acted more decisively and now you support U.S. air strikes." [MP3 audio here.]

Rose also zeroed in on Paul's shifting position regarding Israel:

PAUL: I've always said that foreign aid, we shouldn't give aid to give to anyone if we don't have it. 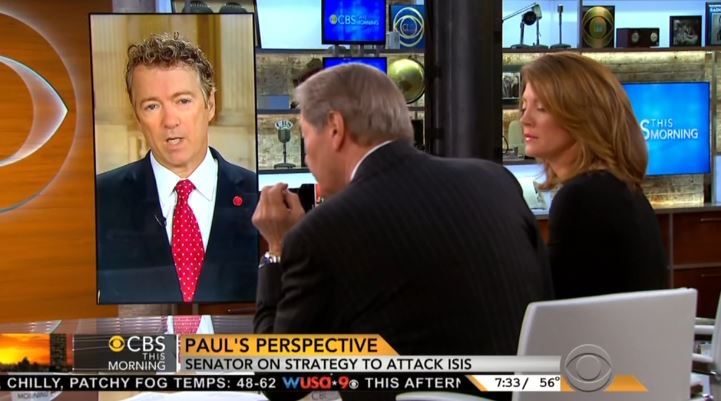 Certainly, Paul's position should be scrutinized and will be of particular interest to Republican primary voters, should he run. But likely 2016 contender Clinton has not been similarly pressed. On July 18, 2014, Rose began an interview by saying of the Democrat, "I consider Hillary Clinton a friend." He then read a poem Maya Angelou wrote about her:

There is a world of difference between being a woman and a being an old female.

If you're born a girl, grow up, and live long enough, you can become an old female. But to become a woman is a serious matter.

A woman takes responsibility for the times she takes up and the space she occupies. Hillary Clinton is a woman.

In an interview for his PBS show on July 18, Rose waited nearly an hour to question Clinton about Benghazi.

A transcript of the September 15 CBS This Morning segment is below:

CHARLIE ROSE: The sudden advancement by ISIS across Syria and Iraq is forcing officials around the world to rethink their views of the Middle East. One prominent American who is taking a second look is Republican Senator Rand Paul from Kentucky. He's with us now from Capitol Hill. Senator, good morning.

CHARLIE ROSE: Tell us how you have changed your views.

PAUL: Well, I think the interesting thing is that as world events change, obviously you change your analysis. So, five years ago Isis wasn't a threat. But I did say even as much as two or three years ago it was a threat to give arms to them in Syria. So I think had the President had his way or had Hillary Clinton had her way, we may well have had ISIS in charge in Damascus now because they've been arming and creating a safe haven for them. As it is, I think ISIS is more of a threat because of the arming of the Islamic radicals in Syria.

PAUL: I've always said that foreign aid, we shouldn't give aid to give to anyone if we don't have it. Basically, I've always thought it was a bad idea to borrow money from China to send it to any country. But I've also always said that as we begin to pare down, and as I am for reducing foreign aid and ultimately eliminating it, why don't we start with the countries that are burning our flag? So, I would start with our enemies and the enemies of Israel. But I'd take the same position that Netanyahu has taken about foreign aid, that even Israel someday should one day be independent of it.

NORAH O'DONNELL: Senator, the front page of the Washington Post has a piece about what they call your evolving views on some foreign policy issues and pointing out in June when asked about air strikes against ISIS, you said "I'm not sure where the clear-cut American interest is." Then, now you're criticizing the President saying he should have acted more decisively and now you support U.S. air strikes. So, let me ask you, what is our clear-cut American interest there?

GAYLE KING: Back to Norah's question about the Washington Post, you were described as an isolationist. But those close to you say, "Nope. He's really a realist." How do you see yourself?

PAUL: You know, what I think is funny about it is they're all saying, "You've changed. You're no longer an isolationist, therefore, you're on two sides of an issue." And all I've been saying for five years of public life is "I'm not an isolationist." I looked at every individual incidence of whether we need to be involved. I look at it reluctantly. I don't want to be involved in war. But I do look and see when American interests are threatened. I am like most Americans. I am influenced by the beheadings of Americans, now the beheading of a British journalist. I think it's going to unite the world against ISIS. But I have steadfastly been against Hillary Clinton and President Obama's intervention in Libya, as well as Syria, 'cause I think they helped to create the situation we now face with ISIS.

ROSE: Even though some argue that if there had been an intervention in Syria, it might have prevented ISIS from becoming what it is now.

PAUL: They're absolutely wrong. For example, had we bombed Syria last year, had the President actually got what he wanted and what Hillary Clinton wanted and to bomb the heck out of Assad, my guess is ISIS would now be in Damascus. ISIS are the strongest fighters there other than Assad.

PAUL: The issue is both.

ROSE: And if they had supported them, they would have been less likely for ISIS to get as strong as it got.

PAUL: Actually, Charlie, the issue was both bombing Assad and arming the rebels. We've been doing both at the behest of Hillary Clinton and president Obama. And I would say one insightful piece of news from the last weekend is some of the moderate rebels, the so-called moderate rebels have now signed a cease-fire with ISIS. So, really, their enemy is really Assad and they don't care what ISIS does. And so, they are the weakest fighting force there. It's a mistake to arm them. Most of the arms we've given to the so-called moderate rebels have wound up in the hands of ISIS because ISIS simply takes it from them or is given them or we mistakenly give it to some of the radicals. So the intervention in Syria has created a safe haven for ISIS and has made our problem much more difficult.

ROSE: Do you want to be defined within your party as a different kind of Republican? Because you have suggested to some Iowans that perhaps the party was obsessing on such issues, same-sex marriage which you had a very strong moral view on, but should not be obsessive.

PAUL: Yeah. I do want to be a different kind of Republican in the sense that, I want to reach out to new people we haven't been reaching out to. I frankly think that we are the party of voting rights.  We are the party of the Bill of Rights. We are the party of emancipation, that we really should be the party reaching out to the African-American public and saying, "Hey, give us another chance. Take a look at us."  Many of the libertarian issues of saying, "You know what, your government should always allow you to have a trial, to have a lawyer. These are things are very important whether you've ever been any kind of minority, whether it's an ideological one or racial one that we need protections against an overzealous government and I think some of these arguments actually will resonate once we take them to new communities.

GAYLE KING: How close are you to announcing you're going to run? Hillary Clinton was in Iowa this weekend. Are you heading there too?

KING: So, you've gone to a lot of places. How close will are you to announcing that you want to run?

PAUL: Next spring will probably – our decision – is when we'll make our final decision.