Flashback: How the News Media Celebrated Democratic Win in ’06 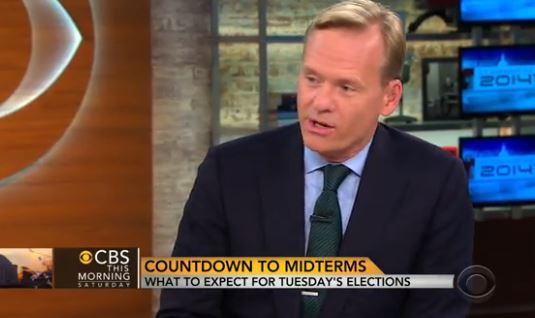 On today’s CBS This Morning: Saturday, the network’s political director, John Dickerson, warned Republicans that if they win the Senate on Tuesday, it will be on their shoulders to find a way to work with President Obama: “They’ve run an entire campaign on the idea that this person, the President in the office, is no good; now they’re suddenly going to have to work with him....After being the opposition party, you now have to show you can actually govern.”

Never mind that the White House has telegraphed Obama’s plan to deliver a post-election middle finger to Republicans — and the voters who support them — in the form of a unilateral amnesty for illegal immigrants that excludes Congress from the lawmaking process. It’s also the opposite of the spin the media employed eight years ago as Democrats prepared to assume congressional power.

Looking back at 2006, the media weren’t wagging their fingers at Democrats warning that, if they won Congress, it was their job to become responsible partners for then-President George W. Bush. Instead, the media were rejoicing at the idea that an all-Democratic Congress could tie up the Bush administration with subpoenas, and even impeachment. Instead of being told they had to prove they could govern by rubber-stamping a Republican President’s priorities, gleeful journalists thought it was “fantastic” Bush would have to negotiate everything with newly-empowered liberals.

As MRC’s Kyle Drennen and I documented, the broadcast networks have done their best to look the other way as the Republican wave builds toward Election Day. Back in 2006, the networks crowed about the impending Democratic victory, even helping to build that wave with massive coverage of a scandal involving Florida GOP Congressman Mark Foley.

Even though Foley stepped down the day the story broke, the networks nevertheless pumped out 152 stories in the two weeks which followed, hoping it was the final nail in the GOP’s electoral coffin. On October 2, 2006, for example, NBC’s Matt Lauer intoned on Today how the scandal was “a major blow to the Republican Party, desperately trying to hold on to control of Congress,” while that night then-CBS Evening News correspondent Gloria Borger highlighted an unnamed Republican who called it “the congressional equivalent of Katrina.”

Meanwhile, journalists were tossing rose petals at the feet of the stridently liberal Democratic Leader Nancy Pelosi, who would be the first woman Speaker of the House. CBS’s Lesley Stahl treated Pelosi to a positive profile on the October 22, 2006 edition of 60 Minutes. “Nancy Pelosi, who already made history once when she became Minority Leader, thinks she’s about to do it again,” Stahl exulted. After a clip of Pelosi talking about Congress having a “marble ceiling,” Stahl added: “And breaking it, she says, would help all women.”

A couple of days earlier on NBC’s Today, correspondent Jamie Gangel also saluted Pelosi: “At 66, she is ambitious, effective, and has made an art form of staying on message.” Then on ABC’s World News on October 26, a dreamy-eyed Claire Shipman tossed this softball to Pelosi: “Do you let yourself think, for example, maybe before you go to sleep at night, ‘Speaker of the House Nancy Pelosi?’”

This year, it’s safe to say no one in the media is daydreaming of Senate Majority Leader Mitch McConnell.

In 2006, there was no talk of victorious Democrats needing to compromise with the White House. Instead, ABC’s Sam Donaldson on This Week (October 22) predicted that if Democrats win, “what we’ll see is subpoenas, if they take control, and these subpoenas will delve into every nook and cranny of the Republican administration for the last six years.”

Donaldson’s colleague, Cokie Roberts, cautioned him: “Well, now you’re doing the Republican talking points, because that is exactly what the administration is making people fear.”

Nonsense, Donaldson retorted: “Why do you think I’m saying it’s a bad thing? I think it’s probably a good thing.”

Five days before the election (November 2) on CNN’s The Situation Room, Jack Cafferty, lobbied Democrats to launch an impeachment drive against President Bush: “This President has pulled off a power grab in the name of the war on terror the likes of which this country hasn’t seen in a very long time. And in the process, people who are a lot smarter than I am suggest that he has broken this nation’s laws over and over and over again....If we are indeed a nation of laws then presumably that applies to President Bush as much as it does to you or to me. Now Bill Clinton, you’ll recall, was impeached for telling a lie. Here’s the question: ‘If the Republicans lose the election Tuesday, what should happen to President Bush?’”

As the election results rolled in on election night (November 7), MSNBC’s Chris Matthews said it was “fantastic news” when then-Hotline reporter Chuck Todd suggested Democrats could take both the House and the Senate: “Well, that’ll be fantastic news. It’ll be huge news, I should say, because if that happens, then we have a government run by the Democrats, and an executive branch run by the Republicans, President George W. Bush, having to actually negotiate every aspect of national policy, including the war in Iraq.”

The next day on the Fox News Channel, Geraldo Rivera expressed the same emotion: “The Democratic wave that washed over American politics last night washed away Defense Secretary Rumsfeld and swamped many Republicans who tried to use the issue of illegal immigration to scare people into voting for them. I am delighted to say that they got their butts kicked.”

And according to the media sages, the Republican election defeat was caused by too much conservatism. On CNN on November 8, analyst Bill Schneider, for example, spun: “Will Republicans move further to the right? Not if they got the message of the election. Republicans lost because they abandoned the center.”

If Republicans win big on Tuesday, a consistent news media would portray it as a rejection of a Democratic Party that’s moved too far to the left. They would argue that, by handing control of the Senate to Republicans, voters were empowering them to investigate the excesses of the Obama administration, and journalists would put the onus on the defeated Obama to curtail his agenda in favor of cooperation.