Lefty Writers: Nothing Wrong With Ginsburg's Blasts at ‘Racist’ Trump 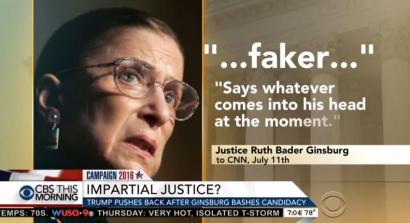 Plenty of liberals who detest Donald Trump nonetheless thought Ruth Bader Ginsburg’s recent blasts at Trump were “ill-advised,” as Ginsburg herself eventually admitted they were. A New York Times editorial on the matter said Ginsburg “needs to drop the political punditry and the name-calling.” Some left-wingers, however, were down with RBG and believed that it was ridiculous to criticize her for getting political given that for several decades, Republicans have methodically shifted federal courts to the right.

Daily Kos writer Armando, whose main gig is as a lawyer, was furious about the Times editorial, especially its hypothetical musing, “Just imagine if this were 2000 and the resolution of the election depended on a Supreme Court decision.” Armando fumed, “What makes this farce of an editorial so pointedly stupid is that sixteen years ago a conservative Republican controlled court thrust itself into the presidential election in unprecedented fashion for no rational legal or constitutional basis. Bush v Gore remains the most infamous decision of the past 100 years.”

Armando asserted that the SCOTUS “has acted politically through out [sic] its history, and particularly since the conservative Republican branch of the Court gained ascendancy in the last 30 years. The entire 10th and 11th Amendment jurisprudence is pure politics. The striking down of the Voting Rights Act [was] pure politics.”

Moreover, wrote Armando, Trump isn’t just another Republican nominee. He’s “different—beyond the pale different…[He’s] a dangerous racist demagogic fraud. That the traditional media does not have the courage to say this forthrightly is no reason why patriots like Justice Ruth Bader Ginsburg should hesitate to do so.”

Ginsburg “told the truth” about Trump, contended Esquire’s Charles Pierce, and “anyone who thinks that RBG's honest assessment of the vulgar talking yam is on a par with A.) Antonin Scalia's hunting trips with Dick Cheney, or B.) the majority in Bush v. Gore including one justice (Scalia) whose son got a job with the administration that poppa helped install and another (Thomas) whose wife did, too, needs to seriously examine their consciences more than they did.”

We are now at the end of a 30-year process in which a well-financed conservative infrastructure restructured the federal court system from top to bottom, seeding it with reliable judges who supported dubious interpretations of laws…

…[Ginsburg has] seen what's happened to the courts first-hand, and she is right to warn us that a Trump administration is just as likely to put the gardener at Mar-A-Lago on the bench as not. Liberals, of course, are supposed to make sure they use the right fork when they sit down to dinner with barbarians.