Virginia Democratic Senator and former vice-presidential candidate Tim Kaine announced on Thursday that he will oppose President Donald Trump's Supreme Court nomination of Neil Gorsuch. The smear Kaine has employed to justify his opposition has generated well-deserved criticism, especially in the Commonwealth. The Washington Post's alleged fact-checking operation, however, has given him an unearned pass.

In tweets announcing his decision, Kaine accused Gorsuch of personally believing that "contraceptive use" is "the wrongdoing of others":

An editorial at the Richmond Times-Dispatch by Dean Hoffmeyer explains that there is no valid basis for Kaine's interpretation of Gorsuch's "wrongdoing of others" statement, and that Kaine's claim amounts to a smear (bolds are Hoffmeyer's; link is in original):

... This is simply false. And Kaine should know it. 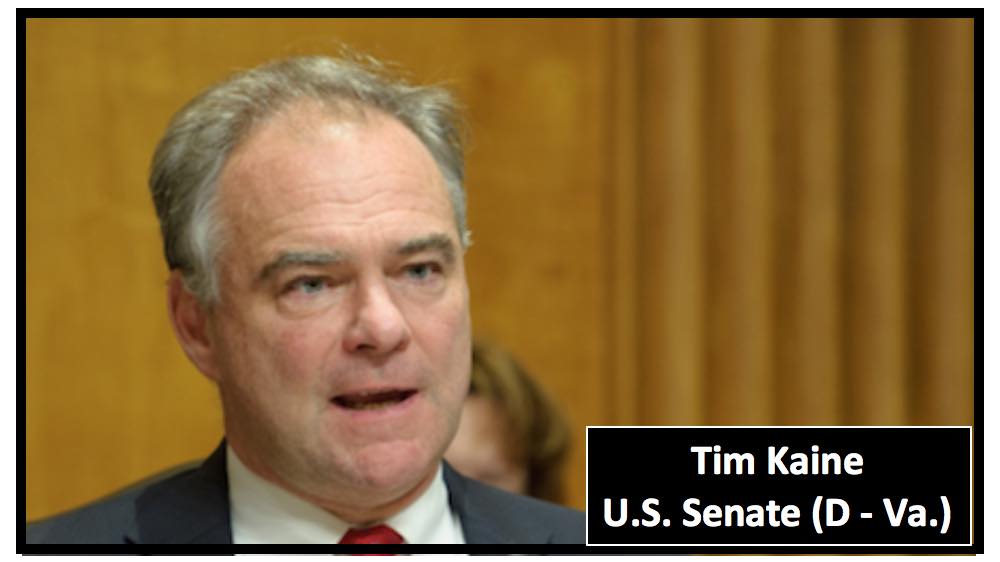 The “wrongdoing of others” language comes from Gorsuch’s 10th Circuit opinion in the Hobby Lobby case, which asked whether the Religious Freedom Restoration Act (RFRA) gave protection to a company that did not want to provide contraception health benefits as required by Obamacare regulations.

In his opinion, Gorsuch begins with a general observation about moral obligations, then explains what Hobby Lobby’s owners, the Green family, believe to be theirs.

“All of us face the problem of complicity. All of us must answer for ourselves whether and to what degree we are willing to be involved in the wrongdoing of others. For some, religion provides an essential source of guidance both about what constitutes wrongful conduct and the degree to which those who assist others in committing wrongful conduct themselves bear moral culpability. The Green family members are among those who seek guidance from their faith on these questions. Understanding that is the key to understanding this case.

“As the Greens explain their complaint, the ACA’s mandate requires them to violate their religious faith by forcing them to lend an impermissible degree of assistance to conduct their religion teaches  to be gravely wrong. No one before us disputes that the mandate compels Hobby Lobby ... to underwrite payments for drugs or devices that can have the effect of destroying a fertilized human egg. No one disputes that  the Greens’ religion teaches them  that the use of such drugs or devices is gravely wrong.”

Had Gorsuch been writing about, say, Employment Division v. Smith, he would have noted that Alfred Leo Smith and Galen Black felt morally obliged to use peyote in their Native American religious rituals. Would Kaine then accuse Gorsuch of endorsing hallucinogens?

To conclude from the passage above that Gorsuch himself views contraception as morally wrong is pure nonsense ... (and) suggests he can’t come up with a defensible reason to oppose the nomination. But inventing one like this is indefensible.

Gorsuch's general observation in his opinion is obviously set off and separated from his discussion of the Greens' beliefs. It should also be clear in context, which is why extra words aren't present, that Gorsuch was describing "whether and to what degree we are willing to be involved in what we believe is the wrongdoing of others." It's obvious in context that different people will have varying views of the circumstances and thresholds of when one becomes involved in or an enabler of others' wrongdoing.

If anything, Gorsuch could conceivably be accused of not using religion as "an essential source of guidance" in his life, i.e., if the Greens are part of the "for some" group, the judge may have been implying that he's not. But Kaine's tweet took an indefensible leap in the opposite direction, and completely without basis contended that Gorsuch's opinion proves that he agrees with the Greens that using abortifacient contraceptives is a blanket form of "wrongdoing." It does no such thing.

Kaine's separately tweeted four-paragraph statement to which Hoffmeyer referred essentially repeats the false argument in the tweet seen above, and attempts to extend it:

He (Gorsuch) has made the astounding argument that bosses have an individual right to prevent their company's female employees from using their own health insurance to buy contraception.

Cleaning up the grammatical sloppiness, Kaine is referring to "female employees ... using their own employer-provided health insurance to buy contraception."

Kaine is attempting to make a distinction where there's no difference. Yes, Hobby Lobby is a corporation, but no reasonable person can claim that someone who owns and runs an unincorporated business, as well as partners in a partnership, don't have the same conscience rights that the Supreme Court recognized for closely-held corporations.

Kaine's use of the term "bosses" is nonsensical, and apparently present to burnish his defiant leftist credentials. A "boss" is a manager who very often is not an owner. The Hobby Lobby decision obviously involved owners.

At the Washington Post, fact-checker Michelle Ye Hee Lee wrote that "... (Kaine's original) tweet on its own would have received at least Three or Four Pinocchios, as it takes Gorsuch’s words way out of context."

But then she justified backing away and arriving at no conclusion:

However, Kaine has issued a statement and a six-page explanation that he released publicly that supplement the tweet. Separately, he provided a nearly 1,000-word legal explanation that we linked above. When you dig beyond the 140 characters, it becomes clear that Kaine is making an interpretation of Gorsuch’s phrasing, and arguing why he interprets it as such. We will not rate this claim, as we do not fact-check opinion, but certainly readers can judge for themselves whether Kaine’s interpretation goes too far.

The four-paragraph "statement" to which Lee refers was already out there, as seen above. Kaine's statement does nothing to mitigate the original tweet's smear — which is a dishonest attempt to assert as a fact something that isn't, not an opinion. (Note: I was unable to locate the "six-page explanation" to which Lee referred, and her writeup, which mentions it twice, does not contain a link. The contents of the tweet and the other documents discussed in this post are sufficient to support the claim that Kaine falsely smeared Gorsuch.)

The "1,000-word legal explanation" was composed at the Post's specific request. Kaine essentially says so in that document's introduction ("I understand that the Washington Post has asked the question about why I interpret Judge Gorsuch’s Hobby Lobby concurrence").

This "explanation" continues Kaine's attempt to make a false distinction between the religious conscience rights of individuals who own businesses and those who own closely-held corporations. As noted earlier, there's no reason to believe that individuals who own self-employed businesses or are in partnerships must leave their religious beliefs behind then when they turn on the lights at their offices. The fact that Gorsuch chose to make that point, while other judges didn't, is in no way damning.

But Lee used this "legal explanation" as an excuse to cop out on her fact check.

It's reasonable to contend that what really happened is that the Post really didn't want to call out a prominent Democratic Party politician's smear contained in a tweet and a four-paragraph statement as false. So it begged for a "legal explanation." Even though it broke no genuine new ground, the Post used it as an excuse to rebrand the entire episode as a matter of opinion and not fact.

I give the Post's effort to airbrush Kaine's smear of Neil Gorsuch Four Pinocchios. It's a whopper.