Ignored: Obama Admin Officially Told the NY Times on November 25 That Elections 'Were Free and Fair'

Though the press apparently wants everyone to forget about it, the fact is that barely two weeks ago, over Thanksgiving weekend, the Obama administration told the world, apparently only through the New York Times, its designated mouthpiece, that "we stand behind our (nation's) election results, which accurately reflect the will of the American people."

The statement was "issued" to the Times on Friday, November 25, and was provided, according to the paper, "on the condition that it be attributable only to a senior official." Just 14 days later, on Friday evening, December 9, the Washington Post published its claim of "a secret assessment that Russia intervened in the 2016 election to help Donald Trump win the presidency." Why should anyone believe that the intelligence landscape concerning Russia's actions changed so quickly in two weeks?

Here, in full, is the statement the Times published on November 26, along with the paper's introduction of it (bolds are mine):

Following is the full text of a statement from a senior administration official, issued to The New York Times on Friday in response to questions about the federal government’s investigation into the integrity of the Nov. 8 presidential election. The government issued the statement to The Times on the condition that it be attributable only to a senior official. 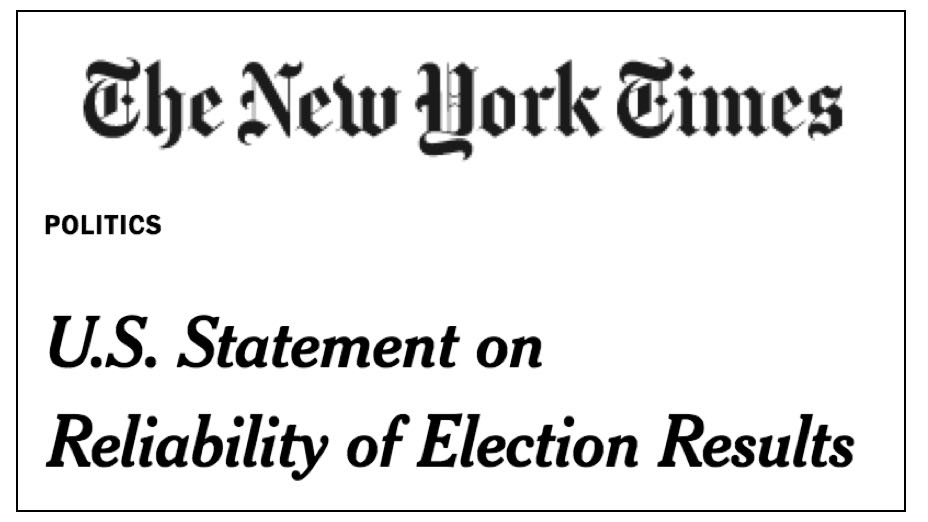 The Kremlin probably expected that publicity surrounding the disclosures that followed the Russian Government-directed compromises of e-mails from U.S. persons and institutions, including from U.S. political organizations, would raise questions about the integrity of the election process that could have undermined the legitimacy of the President-elect. Nevertheless, we stand behind our election results, which accurately reflect the will of the American people.

The Federal government did not observe any increased level of malicious cyber activity aimed at disrupting our electoral process on election day. As we have noted before, we remained confident in the overall integrity of electoral infrastructure, a confidence that was borne out on election day. As a result, we believe our elections were free and fair from a cybersecurity perspective.

That said, since we do not know if the Russians had planned any malicious cyber activity for election day, we don’t know if they were deterred from further activity by the various warnings the U.S. government conveyed.

A Friday evening Times story front-paged on November 26 makes clear that the administration's statement was not only about what did or didn't happen on Election Day:

... (The statement's opening sentence) was a reference to the breach of the Democratic National Committee’s email system, and the leak of emails from figures like John D. Podesta, Hillary Clinton’s campaign chairman.

“Nevertheless, we stand behind our election results, which accurately reflect the will of the American people,” it added.

In other words, Times reporter David E. Sanger wrote, the administration took the Podesta, DNC and other hacks into account when it reached its conclusion that "our election results ... accurately reflect the will of the American people."

This should have been the last word on the matter.

But now those very same computer hacks, based on the Post's December 9 story, are being used as a springboard by political hacks and press hacks to question the legitimacy of Donald Trump's election.

But the fact remains, based purely on what has been published, that an official finding confirming what is in the Post's December 9 story, i.e., even if the Russians did try to swing the election in Donald Trump's favor (which has not been demonstrated) would still have no impact, because the administration has already concluded that the "election results ... accurately reflect the will of the American people," incorporated concerns about those hacks in making that determination, and has not walked it back.

(Even if they have tried to walk it back or end up doing so in the coming days, no one has explained how reality could possibly have changed so quickly in the past two weeks concerning a presidential campaign which ended five weeks ago.)

In the pre-Internet era when we at least occasionally had something resembling a responsible establishment press, it would have been hard for anonymous government officials on a matter as important as general election results to try to do a complete 180 in 14 days in direct conflict with their administration's originally stated position without having some reporter somewhere question what in the world caused it.

But the supposedly bombshell Washington Post story itself failed to acknowledge the existence of the statement the Times published, and just about every press and broadcast outlet is doing the same. Words utterly fail.

But it gets worse.

You see, the White House is now claiming that President-Elect Donald Trump asked the Russians to engage in hacking.

In his broadcast Monday, Rush Limbaugh put the related statement made by White House Press Secretary Josh Earnest to shame, and stated his sadly credible beliefs about the motivations behind all of this negligence and blame-shifting:

(From today's White House Press Briefing; video of what Earnest said is at the 0:29 mark of the video seen here)

RUSH: Are you kidding me?

... Do you remember? There were 33,000 emails of Hillary's that were missing, that she deleted! And then somebody came along... It was alluded during the campaign that somebody had them and that WikiLeaks was going to be releasing them, and then a story came out that this Kim Dotcom guy had them or somebody had Hillary's 33,000. Trump was asked about it. He said, "Maybe the Russians can find 'em."

He was cracking a joke!

... And the reaction... These people in the Democrat Party -- the media, the left -- have no sense of humor, folks, especially when the joke's on them. When you're making fun of what they do and say, when you mock them, they can't take it. They don't get it. They're not funny people anyway. They don't laugh and smile by nature! They're constantly scowling and running around in various degrees of outrage and angst and anger. So when Trump said maybe the Russians, it was a throwaway. It was brilliant. It was a fabulous...

I remember laughing myself silly over it here.

Of course Trump was being sarcastic, and he said so back in July after the left tried to falsely invent his motivations, as seen in this Reuters report (though Reuters never quoted what Trump actually said; how tough is it to present a six-word quote?):

“You have to be kidding. His client, his person, deleted 33,000 e-mails illegally. You look at that. And when I’m being sarcastic with something …” Trump said in a Fox News interview broadcast on Thursday.

... Trump’s explanation echoed those of his campaign advisers and other supporters, who immediately tried to pass his comments off as tongue-in-cheek and not serious.

It wasn't a matter of "passing his comments off" as "not serious." They were "tongue-in-cheek and not serious."

What really is serious is the Obama administration's utter contempt for the truth, its willingness to become fully engaged in the battle to delegitimize Donald Trump's legitimate election, and the press's willingness to join the battle on the administration's side in what really does appear to be an attempt to nullify at least the perceived validity of the election result, if not to overturn it entirely.