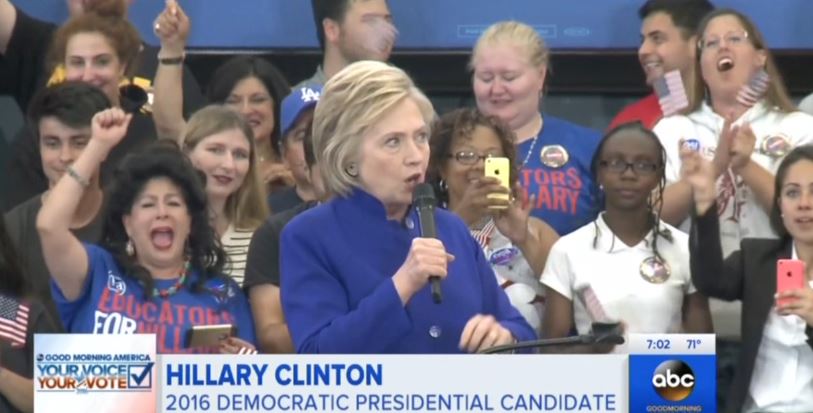 On Tuesday, Zach Schonfeld, a senior writer for Newsweek, decided to mine what is "now a massive, unprecedented content graveyard of articles celebrating or analyzing Hillary Clinton's would-be historic victory," presenting "a small sampling ... of what the internet would have looked like on November 9 if Clinton beat Trump, as so many pundits forecast."

It's mildly entertaining, but it comes with heavy and offensive dose of smug self-importance.

Not content to just present the material, Schonfeld had to elevate journalists who prepare dispatches which have to be left on the cutting room floor to a level "similar" to a U.S. president who had to face the possibility that U.S. astronauts might die while the entire world was watching (link is in original; bolds are mine throughout this post):

DISPATCHES FROM THE ALTERNATE UNIVERSE WHERE HILLARY CLINTON WON

In 1969, Richard Nixon prepared a harrowing speech to be given in the event that Neil Armstrong and Edwin Aldrin didn't survive the moon landing.

Thankfully, he never had reason to deliver it. But the speech lives on as a fascinating glimpse into an alternate universe where one small step for man became one traumatic disaster for mankind.

Sure, Zach. Dealing with the idea that you might have to tell the world that your government unsuccessfully staked the life of two men on a pioneering, history-making mission is so "similar" to having to prep a "Hillary won" dispatch and having to throw it away. And they wonder why so many of us utterly despise their work.

Next time, Zach, spare us. Please.

As to the samples from drafts the writers couldn't use, they certainly piled on the hyperbole, providing yet another reason for widespread relief that the press, despite all its efforts and its own admitted bias in her favor, could not push the most corrupt and criminal presidential candidate in U.S. history into the White House. Here are a few:

Sparing the Republic from the whims of a twisted maniac is no small triumph. Clinton’s skeptics have already been denying credit for her expected victory by noting that she benefited from facing the least popular major party nominee in history, and that a normal Republican could have defeated her. This misses the extraordinary nature of the opposition that produced this unpopularity in the first place. Clinton has absorbed 25 years of relentless and frequently crazed hate directed at her husband, compounded by her status as a feminist symbol, which made her the subject of additional loathing. Her very real missteps were compounded by a press corps that treated her guilt as an unexamined background assumption. ...

Congrats. You've achieved history. As someone who supported Bernie Sanders in the primary but still fought to defeat Donald Trump, I want to say thank you and you're welcome. Thank you for delivering us from Trump. And you're welcome for the work we did to send you to the White House. Without Sanders's running all over the country campaigning for you, and without the GOTV efforts and votes of Sanders supporters, you wouldn't have won.

I think we have the potential for a mutually beneficial relationship. But let's be real. I'm not that into you, and you're not that into me. ...

And yet: Hillary Clinton’s victory is historic—a triumph that should not be overlooked. It marks the end of centuries of exclusion of women from the nation’s top job. Even more remarkable was the way she won it: by running as a woman, who championed policies aimed at women, against an avatar of reactionary sexism. ...

On Election Day, Americans across the country roundly rejected the kind of fear- and hate-based conservatism peddled by Donald Trump and elected the first woman in U.S. history to the presidency.

Imagine that. For once, Paul Krugman made a smart move.