For those who haven't noticed — and that would be understandable, given the national press's and broadcast outlets' consistent lack of interest during the period involved — the ongoing and worsening disaster in Syria in the past three years has caused "physical, human and political damage on an unprecedented scale." That quote comes the subheadline at Anne Applebaum's Monday column in the Washington Post.

The main headline: "The disastrous nonintervention in Syria." So here was Applebaum's problem: How does one chronicle this disaster without making it look like President Barack "Lead From Behind" Obama deserves the lion's share of the blame? Her answer: Blame then-UK Prime Minister David Cameron.

Applebaum's copout is that Cameron's failure to get his nation's parliament to go along with Syrian intervention "spooked" (yes, she really used that word) Obama, who until then supposedly supported intervention, and caused him to "change his mind" — at which point the French, who also supported intervention, decided that they couldn't possibly go it alone (links are in original; bolds are mine throughout this post):

The disastrous nonintervention in Syria
Physical, human and political damage on an unprecedented scale. 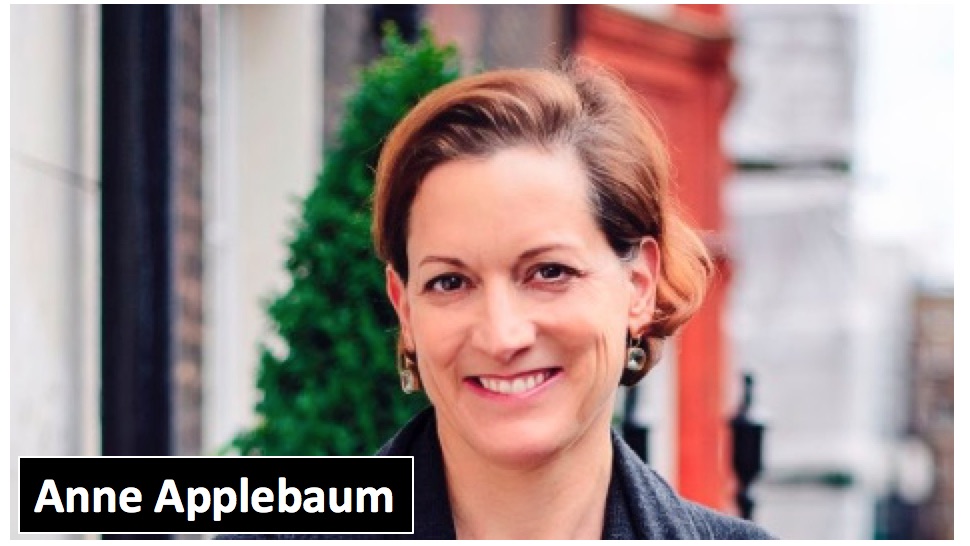 We will never know. But we do know what happened instead. Britain withdrew support for a mission intended to halt the use of chemical weapons by Bashar al-Assad, the Syrian dictator. Spooked by the House of Commons vote, President Obama also changed his mind. On the morning of Aug. 30, 2013, Secretary of State John F. Kerry called for action: “History is full of leaders who have warned against inaction, indifference, and especially against silence when it mattered most.” By the next day, however, the president declared that all plans for a strike were off. The French, caught off guard, didn't’t want to do anything alone, so they too withdrew — regretfully. “It was a great surprise,” the French prime minister told the Atlantic’s Jeffrey Goldberg. “If we had bombed as was planned, I think things would be different today.”

Just a year earlier, Obama had made his "red line" declaration after Syrian dictator Assad attacked his opponents with chemical weapons, and supposedly got Assad to give them up. This time, he stood down, preferring widely predicted horrible consequences to come to the apparently far worse prospect of having only the French at his side and having to be seen as primarily responsible for the consequences.

He chose not to even try to make the case for intervention to the American people, instead telling them just ten days later that he would pursue a "diplomatic path" with Russia and seek a U.N. resolution. It's reasonable to question whether Obama was ever interested in intervening. The New York Times, covering the speech, prepped its readers for failure, noting that "his own advisers conceded was rife with risk, given Russia’s steadfast refusal to agree to any previous measures to pressure Syria, its longtime ally."

Three years later, here we are. Applebaum listed the major elements of the disaster, and predictably mischaracterizes the final one:

Three years on, we do know, after all, exactly what nonintervention has produced:

Refugees. According to the U.N. High Commissioner for Refugees (UNHCR), there were 4.8 million registered Syrian refugees as of Aug. 16. There are thought to be an additional 2 million refugees who remain inside Syria but are displaced from their homes. Three-quarters of those who have fled their homes are women and children. Most own nothing except what they are wearing. To give some perspective, the refugee crisis caused by the Yugoslav wars in the early 1990s produced 2.3 million refugees, a number then considered to be the worst refugee crisis since the 1940s. The Syrian crisis is three times larger.

Destabilization of the region. The vast majority of the refugees are in Turkey, Lebanon, Jordan, Iraq and Egypt, where they put an enormous economic and political burden on poorer, frailer states. ...

... Destabilization of Europe. Thanks in part to the war in Syria, hundreds of thousands of refugees have sought to reach Europe by boat across the Mediterranean or by foot across the Balkans. ... The European Union’s unwillingness or inability to control the flow has helped further undermine its institutional credibility.

Rise of xenophobia across the West. The spectacle of hundreds of thousands of people walking and sailing into Europe has also launched an unprecedented wave of xenophobia.

Here's the definition of "xenophobia":

an unreasonable fear or hatred of foreigners or strangers or of that which is foreign or strange.

In light of all that has happened in Europe as a result of the refugee wave, it's unfathomable how anyone who is genuinely reasonable can say that native Europeans' fears resulting from the very "destablization'" Applebaum herself cited are "unreasonable":

In light of what is really happening, Applebaum's play of the "xenophobia" card is intensely repulsive, up to and including her characterization in her final paragraph to the opponents of an open-ended, unlimited refugee influx as evidence of "renewed stirrings of fascism." Sorry, Anne. What you're really referring to is national and cultural self-defense — perhaps too late to matter.

Maybe ... (the results of nonintervention) are better than the alternative that seemed so unpalatable to the British Parliament and the American president.

Given that Applebaum herself cited "physical, human and political damage on an unprecedented scale," it's hard to imagine how that could be the case. What's worse than "unprecedented"?

Applebaum's effort is a pathetic, irresponsible attempt to shift blame away from President Obama for horrors which have occurred entirely on his watch as a result of his indecision and failure to lead.