Those who continue to bitterly cling to the notion that the press is fair and balanced won't be able to explain this one away.

In covering Colin Kaepernick's Sunday comments about his decision to sit through the National Anthem just before the beginning of National Football League games, the San Francisco 49ers quarterback called GOP presidential candidate Donald Trump "openly racist." He immediately followed by stating that "any other person" would "be in prison" for having "done (the) things illegally" that Democratic Party nominee Hillary Clinton has done. The press has frequently mentioned what Kaepernick said about Trump, but has almost completely ignored what he said about Mrs. Clinton.

Kaepernick commented on each of the two major candidates sequentially:

COLIN KAEPERNICK: ... I think the two presidential candidates that we currently have also represent the issues that we have in this country right now. 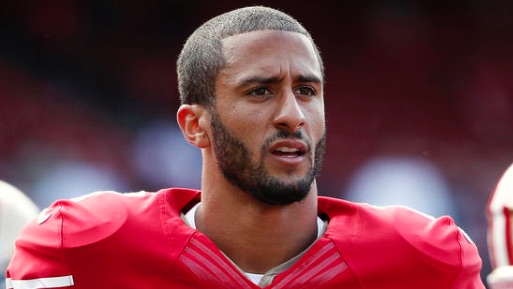 REPORTER: Do you want to expand on that?

KAEPERNICK: You have Hillary who has called black teens or black kids super predators, you have Donald Trump who’s openly racist. We have a presidential candidate who has deleted emails and done things illegally and is a presidential candidate. That doesn't’t make sense to me because if that was any other person you’d be in prison. So, what is this country really standing for?

A Google News search on [Kaepernick Clinton prison] (same parameters) returned four relevant results. Only an item in the Washington Post was from an establishment press outlet.

One outlet which predictably carried Kaepernick's description of Trump, but not of Clinton, was the Associated Press.

There's little point in trying to argue that reporting what Kaepernick said about Trump and not relaying what he said about Mrs. Clinton is excusable. The fact that Trump responded and Mrs. Clinton did not does not change the circumstances (in fact, one might argue that Mrs. Clinton's silence indicates that she has no credible or coherent response). But that's what the AP's Janie McCauley did on Monday:

"I have followed it, and I think it's personally not a good thing. I think it's a terrible thing," Trump said. "And you know, maybe he should find a country that works better for him. Let him try, it won't happen."

Searches at both the AP's main national site and its "Big Story" site on "Kaepernick Clinton prison" (not in quotes) each returned no results.

It's hard to imagine AP's coverage of the Kaepernick saga getting worse, but it does.

In a separate earlier writeup, McCauley compared Kaepernick's move to the 1968 "Black Power" stunt pulled by Olympic sprinters John Carlos and Tommie Smith at the Mexico City Olympics in 1968. Incredibly, she failed to accurately describe what the two medalists did:

On Sunday, he (Kaepernick) stopped briefly on a side field to talk with Dr. Harry Edwards and they shared a quick embrace before the quarterback grabbed his helmet and took the field. Edwards is a sociologist and African-American activist who helped plan the “Olympic Project for Human Rights” before the 1968 Mexico City Olympics, where U.S. sprinters and medalists Tommie Smith and John Carlos bowed their heads through the anthem on the medal podium in their black power protest.

Gosh, I didn't remember the "bowed heads" as the most visible element of what Smith and Carlos did. That's because they weren't. The raised fists in black gloves giving the Black Power salute were:

Janie McCauley owes us an answer as to why she so wrongly described that well-remembered 1968 event. The AP owes readers a correct description I suspect will never come.

The press won't even cover consecutive fiercely critical statements uttered by a currently controversial figure about the two major presidential candidates in a fair and balanced manner. Those who contend that journalism is dead don't need to look any further for proof.