Its first in-house recognition of the Monday evening meeting took place Thursday evening, over 48 hours after the first media reports of it (here and here) had appeared. That report by Mark Lander was relegated to Page A17 of the paper's Friday print edition.

During Friday, two additional online-only items appeared. Oddly, both stories have "07/02" URLs, even though their time stamps say July 1. This story-dating strategy normally occurs with items which are known to be targeted for the next day's print edition at the time they are posted.

Even though her dispatch's headline claimed that the meeting had caused "a Stir in Both Parties," Maggie Haberman's entry in the paper's Elections 2016 section opened by emphasizing how it had "spurred a firestorm of Republican criticism."

Four paragraphs later, Haberman told readers that presumptive Republican presidential nominee Donald Trump had "pounced on the news in a radio interview on Thursday." Hardly. Trump saw low-hanging fruit and, at least based on what Haberman relayed in her post, registered only an indirect criticism of what Lynch had said was discussed, namely that “When you meet for a half-hour and you’re talking about your grandchildren and a little about golf, I don’t know, it sounds like a long meeting.”

Ah, but that's not all Trump said. The Thursday evening story by Landler, apparently before the Old Gray Lady's editors went into full cleanup mode, reported that Trump "seized on the incident, describing it in a radio interview as a 'sneak' meeting and saying it exposed the rigged nature of the process." Those two words, "sneak" and "rigged," are in line with many voters' perceptions of the Clintons and the Democratic Party. It should be no surprise that forms of those two words were not found in any other Times-generated article reviewed for this post.

Finally in Paragraph 8, Haberman indicated that "even some Democrats winced, suggesting it created needless questions about appearances." Are you sure that they weren't just reacting to bright sunlight, Maggie? The translation here is that Democrats don't really think that the meeting itself was an obvious impropriety. As usual, what mattered was that the Lynch and Clinton got caught, and that it was "an unforced error." Thus, Trump, who Haberman believes "has created a large hole for himself over many months," now has a better chance "to fight his way back, something that concerns Democrats" (as well as all the Democrats who work at the Times, of course).

The other Friday online item, an afternoon report by Amy Chozick, went to great lengths to excuse the meeting as a just another case of Bill Clinton's habit of taking advantage of "the rarefied world of private plane tarmacs." After pointing to four previous tarmac encounters — all with Republicans, of course — the Times reporter essentially excused it an example of Bill Clinton's "unpredictable and sociable nature" (bolds are mine):

Bill Clinton’s Fondness for Tarmac Talk Gets Him Into Trouble

... on Monday, the practice brought a world of political problems for Mrs. Clinton. 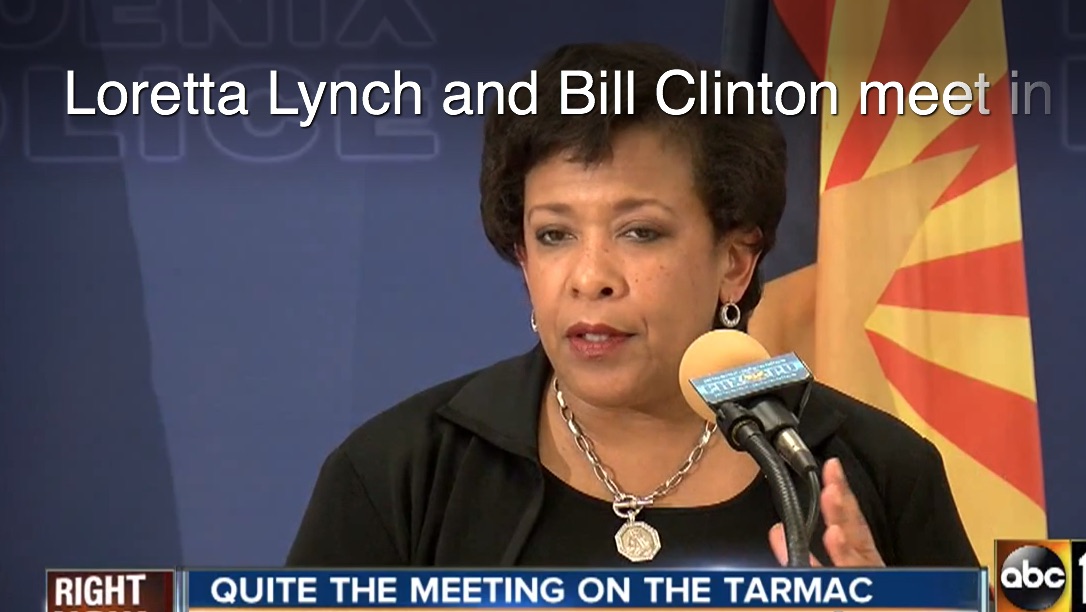 Mr. Clinton had just finished a stop on a seven-state, 10-event fund-raising swing for his wife’s campaign when he was boarding a private charter at the Phoenix Sky Harbor International Airport. (The visit did not include playing golf, despite reports to the contrary.)

He spotted the entourage and security personnel that signaled another important person’s plane. With the temperature over 103 degrees, Mr. Clinton, rather than chatting on the scorching cement, climbed aboard to say hello to Attorney General Loretta E. Lynch.

What happened next has caused a cascading political storm for Mrs. Clinton’s campaign; provided fodder for Republicans who have accused the Justice Department of bias in its inquiry into Mrs. Clinton’s use of a private email server at the State Department; and even had Mrs. Clinton’s allies asking Friday: What was he thinking?

... Ms. Lynch, who was in Phoenix for a community-policing event, had visited Janet Reno, the former attorney general who suffers from Parkinson’s disease. Much of the conversation with Mr. Clinton, which also included Ms. Lynch’s husband and a handful of aides and secret service agents, revolved around Mrs. Reno’s health and family, as well as small talk about Mr. Clinton’s new grandson, according to a Clinton aide briefed on the conversation who spoke on the condition of anonymity because the aide was not authorized to publicly discuss the meeting.

The episode came as Mrs. Clinton’s campaign sought to put the F.B.I.’s email investigation behind it.

... But as the meeting with Ms. Lynch illustrates, Mr. Clinton’s unpredictable and sociable nature can cause problems for his wife’s candidacy. David Axelrod, the former senior adviser to President Obama, said on Twitter that while he took Mr. Clinton and Ms. Lynch “at their word” that they didn’t discuss the investigation, it was “foolish to create such optics.”

Taking the bolded items above in order:

Once the parties involved had all of their excuse-making and legal-posturing ducks in a row, the Bill Clinton-Loretta Lynch meeting finally made it to the Times's front page Saturday morning:

Attorney General Loretta E. Lynch, conceding that her airport meeting with former President Bill Clinton this week had cast a shadow over the federal investigation of Hillary Clinton’s personal email account, said Friday that she would accept whatever recommendations career prosecutors and the F.B.I. director made about whether to bring charges in the case.

Ms. Lynch said she had decided this spring to defer to the recommendations of her staff and the F.B.I. because her status as a political appointee sitting in judgment on a politically charged case would raise questions of a conflict of interest. But the meeting with Mr. Clinton, she acknowledged, had deepened those questions, and she said she now felt compelled to explain publicly her reasoning to try to put the concerns to rest.

“People have a whole host of reasons to have questions about how we in government do our business,” Ms. Lynch said at an Aspen Institute conference in Colorado. “My meeting on the plane with former President Clinton could give them another reason to have questions and concerns.”

Though she insisted the 30-minute conversation was a purely social encounter, Ms. Lynch said, “I certainly wouldn’t do it again.”

The attorney general’s response did little to quell a political tempest in Washington, with some Republicans calling for her to recuse herself from the case — a step she said she was not going to take. Donald J. Trump, the presumptive Republican nominee, said the meeting had “opened up a Pandora’s box.” He cast doubt on whether it was entirely social, citing it as an example of how “the special interests are controlling your government.”

For Democrats, already anxious about the political impact of the email investigation, the incident revived fears that Mr. Clinton could become a rogue actor in a campaign that has so far operated more smoothly than Mrs. Clinton’s presidential bid in 2008.

This actually works out pretty well for Lynch, and for Hillary Clinton.

Lynch's position that she won't overrule the FBI is actually an announcement that she won't exercise the professional responsibility associated with her office. The "chance meeting" in Phoenix has given her the opportunity to take herself, and perhaps the entire Department of Justice, off the hook. (Who on Lynch's staff would have the nerve to "recommend" overruling the FBI in these circumstances?)

If the FBI were to recommend that Mrs. Clinton should not be indicted for her crimes — the only open question is whether she will be prosecuted for crimes the public record shows she has committed — Lynch can now say "it's not my job" to overrule the agency, even if she knows, based on the law, that a prosecution should occur. It still really is her job, but now she won't do it — and in today's upside-down world, that de facto abdication enables her to maintain her professional reputation among the elites, including in the establishment press.