AP Makes Up a Reason to Obsess Over the Klan, and of Course Associates It With Trump

The history of the Ku Klux Klan, as Wikipedia accurately describes it, is "of three distinct past and present movements." The first, founded "sometime between December 1865 and August 1866," died out after five years. The Klan's next distinct incarnation didn't occur until 1915. All three incarnations of the Klan were either arms of, had close ties to, or were dominated by members of the Democratic Party.

It's important to note all of this to demonstrate that the Associated Press had no basis, other than a perceived opportunity to gratuitously take guilt-by-association shots at presumptive Republican presidential nominee Donald Trump, to present "Big Story" reports on the Klan which falsely asserted that the group this year "marks 150 years of existence." Yeah, except for that over 40-year gap when it didn't exist at all. (Whether the current Klan is engaging in such pretense doesn't matter.)

The shorter "dreams of rising again" dispatch is 941 words. The longer "sees opportunities" report weighs in at an astonishing 1,582 words, a bit more than one word for every two to four Klan members nationwide, based on what Reeves reported (bolds are mine throughout this post):

The Alabama-based SPLC (Southern Poverty Law Center) estimates the Klan has about 190 chapters nationally with no more than 6,000 members total, which would be a mere shadow of its estimated 2 million to 5 million members in the 1920s.

Seldom has so much ink and bandwidth been wasted on such a small number of ineffective, small-minded, politically irrelevant (except as naive leftist props) people.

The AP would have been more justified in updating its readers on the current status of the Women's Christian Temperance Union, the group which gave us the supposedly "progressive" reform known as Prohibition, has been with us continually for the past 143 years, has a current estimated membership of 5,000, and is still active and publicly visible.

The SPLC is notoriously obsessed with right-wing extremist groups. There are so few genuine such groups with so few members that to justify its existence, it has taken to calling any group which advocates traditional one-man, one-woman marriage (e.g., the Family Research Council) as a hate group. Four years ago, the SPLC's irresponsibility had consequences, fortunately not deadly, when Floyd Corkins, a man who cited the SPLC's designation as his motivation, "shot up the Washington, D.C., offices" of the FRC. Fortunately, "The council's unarmed security guard (who) was shot ... subdued Corkins despite his injuries." If he hadn't, dozens might have died. The SPLC considers it "outrageous" that anyone would associate it with Corkins' actions.

The primary objective of the AP's "reporting" was clearly to shoehorn the following paragraphs into two national stories:

... In a series of interviews with The Associated Press, Klan leaders said they feel that U.S. politics are going their way, as a nationalist, us-against-them mentality deepens across the nation. Stopping or limiting immigration — a desire of the Klan dating back to the 1920s — is more of a cause than ever. And leaders say membership has gone up at the twilight of President Barack Obama's second term in office. 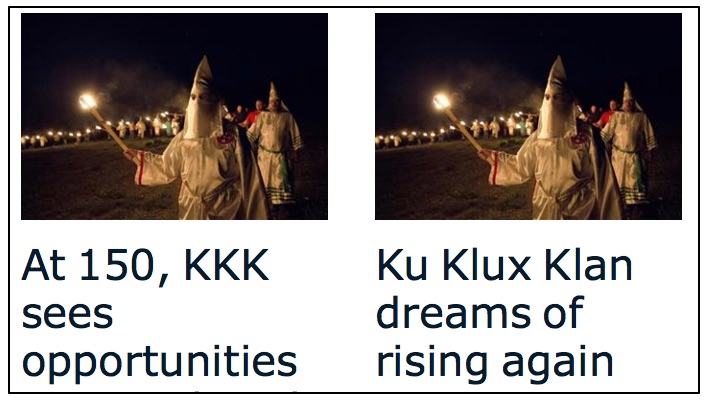 And other Klan leaders say Donald Trump's ascendancy in the GOP is a sign things are going their way.

"You know, we began 40 years ago saying we need to build a wall," Arkansas-based Klan leader Thomas Robb said.

There you go. The AP wants readers to believe that any supporter of nationalism, only-lawful immigration which doesn't take jobs away from current citizens, and building a wall to stem the tide of illegal immigration is really no different than the racists in the KKK.

Historian David Cunningham, author of "Klansville, U.S.A.: The Rise and Fall of the Civil Rights-Era Ku Klux Klan," notes that while the Klan generally doesn't openly advocate violence, "I do think we have the sort of 'other' model of violence, which is creating a culture that supports the commission of violence in the name of these ideas."

Outfits like SPLC think it's "outrageous" that people blamed them when someone attempted mass murder based on their false evaluation of a mainstream Christian group. But in David Cunningham's world, every person on earth who is patriotic, or advocates reasonable controls on immigration, or thinks a border wall is necessary, deserves to be blamed for any and all violence which might be committed by people who claim to hold similar positions.

Naturally, neither of Reeves' reports at the AP, nor the wire service's item on the Klan's "rule book" noted above, mentioned the Democratic Party's nearly century-plus association with the various incarnations of the Klan.