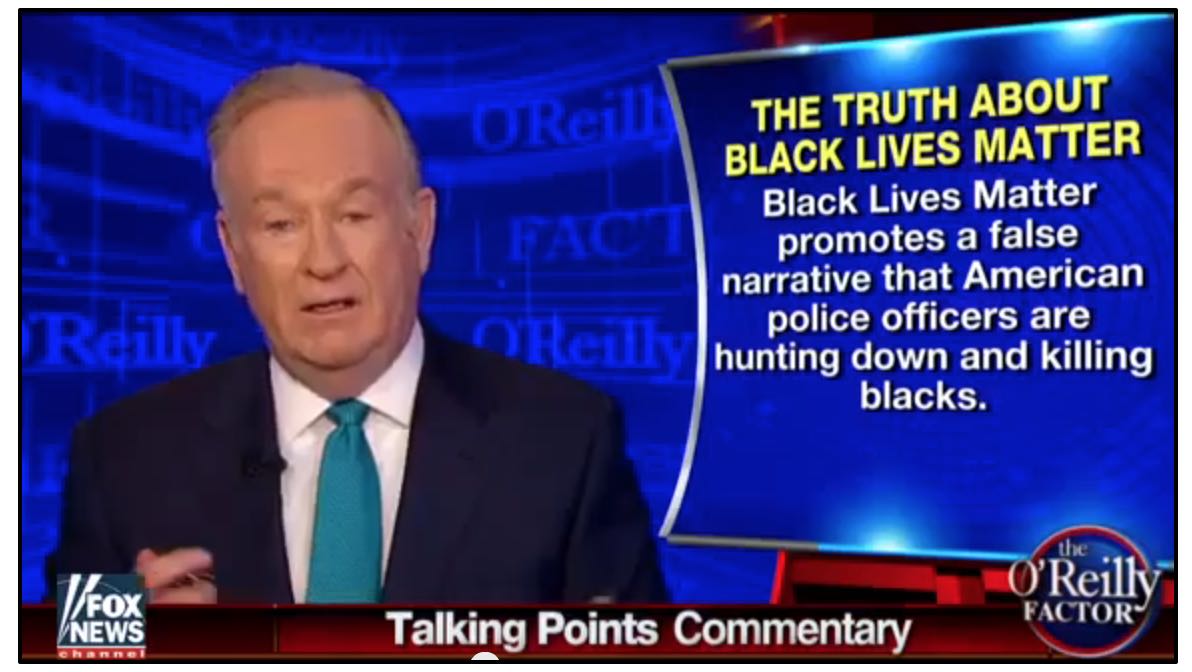 Though his monologue contained one significant exaggeration, his overall take — expressed in layman's terms, that the "Ferguson effect" is real — was spot-on. Leftists, up to and including President Obama, with the full cooperation of a sympathetic establishment press, have denied the linkage between the orchestrated attempt begun in Ferguson, Missouri in August 2014 to embed into the nation's consciousness the false idea that police are on a mission to gun down innocent black youths and the rising crime levels which have since arisen in so many of the nation's cities. O'Reilly also sharply rebuked the press, which has been far too quick to downplay the serious increase in urban crime and to ignore the violent records and actions of BLM and its leaders.

O'Reilly's monologue includes video from the disgraceful Tuesday evening shutdown by Black Lives Matter protesters of Milo Yiannopoulos's speech at DePaul University in Chicago while university security sat on their hands and did nothing:

BILL O'REILLY: Hi, I'm Bill O'Reilly. Thanks for watching us tonight. How Black Lives Matter is killing Americans — That is the subject of this evening's Talking Points memo.

First, the stats, and they are stunning.

Since the Ferguson chaos, murders in the USA's 50 largest cities are up close to 17 percent — and much higher in cities with large black populations. In Chicago, for example, this year alone, shootings (are) up around 80 percent. Why? Because Chicago police have stopped stopping suspicious people.

So-called pedestrians stops are down 90 percent in the Windy City. When you fail to police proactively, people commit more crimes.

The media will not spotlight that much of the violent crime in America is being committed right now by young black men. In fact, black males between the ages of 14 and 17 commit homicide at a rate 10 times higher than white and Hispanic male teenagers combined. And blacks of all ages commit homicide at a rate of eight times higher than whites and Hispanics combined.

Conclusion? There is a violent subculture in the African-American community that should be exposed and confronted.

Enter the Black Lives Matter crew which roams around the country promoting a false narrative that American police officers are actively hunting down and killing blacks. Here's the truth. Police shot whites at a rate of 50 percent in 2015. Police shot blacks at a rate of 26 percent. In addition, Black Lives Matter is now infringing on freedom of assembly and freedom of expression. In Chicago, at DePaul University, this happened Tuesday night.

UNIDENTIFIED MALE: We need some help.

UNIDENTIFIED FEMALE: (after grabbing microphone) We good! (then appears to shove either the microphone or her fist in the face of one of the two speakers)

BILL O'REILLY: So, there is no question Black Lives Matter is affecting what we do here in the USA.

A new book by Heather McDonald entitled "the war on cops have a new attack on law and order makes everyone less safe" leaves out the threat from the radical group which oftenly attacks Compstat, a policy placing police officers where violent crime is taking place.

Here's a quote from Miss McDonald: "In terms of economic stimulus alone no other government program has come close to the success of Compstate. In New York City, businesses that had previously shunned drug infested areas now set up shops there. Offering residents a choice in shopping and creating a demand for workers. Children could ride their bikes on city sidewalks without their mothers worrying they would be shot. But the crime victories of the last two decades and the moral support on which law and order depends are now in jeopardy, thanks to the falsehoods of the Black Lives Matter movement."

So, summing up, thousands more Americans are being murdered because police are being more passive. Since the Ferguson situation and the Black Lives Matter protests. Talking Points believes every American should know that, should know the truth. Sympathetic media and many race hustlers are backing Black Lives Matter and the final indignity, members of the group have even been invited to the White House. And that's “The Memo.”

O'Reilly is incorrect when he blames BLM for "thousands" of additional murders in the U.S. The 50 cities involved saw murders increase by roughly 770 in 2015 over 2014. That's a clearly tragic result, but it's highly unlikely that total U.S. murders increased by more than 2,000 from 2014's nationwide total of 14,249. If form holds, official FBI stats for 2015 will likely be published in September. O'Reilly probably would have been correct if he had said that 2015 saw thousands more murders, shootings, and violent assaults combined.

Obama's own FBI director and some brave researchers, including at least one who formerly felt otherwise, have seen the rise in urban crime and placed the blame where it belongs. That researcher, criminologist Richard Rosenfeld, now believes that “The only explanation that gets the timing (of the violent crime spike) right is a version of the Ferguson effect."

After O'Reilly's monologue, in the second half of the video seen here, the Fox News host had a discussion with a guest, trial attorney and political commentator Eric Guster, who contended that BLM is essentially blameless, and that police should be bearing the brunt of public criticism because they are not doing their jobs.

The problem with Guster's contention is that police in many cities have been formally or informally ordered to abandon the "broken windows" law-enforcement strategy begun in the 1990s by Mayor Rudy Giuliani in New York City and subsequently employed elsewhere. In other words, authorities on high, intimidated by Black Lives Matter and their so-called civil liberties friends, have told beat cops to stop doing the portion of their jobs that was so successful in bringing crime down during the past two decades. That's why pedestrian stops are down so sharply in Chicago.

As to the Yiannopoulos incident, Breibart.com reported the following (HT Progressives Today):

Meet Kayla Johnson, The DePaul Protester Who Took a Swing At Milo

The second lead protester at last night’s event at DePaul University has been identified as Kayla Johnson, the daughter of Juanita Johnson, who serves as the Chicago Police Department’s Director of Administration.

Johnson rushed onto the stage behind Edward Ward, a political science graduate and minister who led the effort to shut down Breitbart Tech editor Milo Yiannopoulos’ event. From the stage, Johnson shouted at and taunted attendees. Eventually, she grabbed the microphone from an event organizer and taunted Yiannopoulos with it, taking several swings at his head.

Kayla's mom must be so proud. (I hope that's sarcasm, folks.)

On a personal note, my parents met at and graduated from DePaul, and supported the university while they were alive. I can say with nearly absolute certainty that they would have terminated that support if an incident such as Tuesday's disgraceful suppression of free speech with no visible consequences had occurred during their lifetimes. All living DePaul graduates should consider doing the same unless the administration takes meaningful action against Tuesday's disruptors.

Meanwhile, parents can surely find other quality educational institutions with annual tuitions lower than DePaul's $37,000-plus which won't coddle student thugs who shout down and shut down people with whom they disagree. But if they can't, getting a degree online has never looked like a better idea than it does now.