DNC Chair: Hillary Has Provided the Most Transparency 'Other Than the Private Server'

In a Fox News Sunday interview so painful to watch readers are advised to consider taking headache medicine before viewing, Democratic National Committee Chair Debbie Wasserman Schultz tried to make the case that the FBI investigation into Hillary Clinton's handling of emails containing sensitive and classified national security information and her use of an undisclosed private email server is a "distraction," and that the idea of even raising it as a campaign issue is "ludicrous."

Show host Chris Wallace was particularly perturbed when the DNC chair claimed that Mrs. Clinton was "using private e-mail in the same way that previous secretaries of state have," and forced her to admit: "Other than the private server":

Wasserman Schultz insisted that Hillary Clinton is "going to be fine," and that what the FBI is doing is "is going to amount to nothing more than an investigation" when all is said and done.

What's striking about the interview segment is how much of the DNC chair's dialog is halting and almost incoherent, with at least two awkwards moments of "Oh no, now what do I say?" silence (HT Washington Free Beacon):

The transcript provided by Fox (also edited by me to add commas and "uhs" where Wasserman Schultz genuinely paused), indicates how flummoxed the DNC chair, who apparently is spoiled by softball interviews at the other television networks, really was (full program transcript is here; bolds are mine): 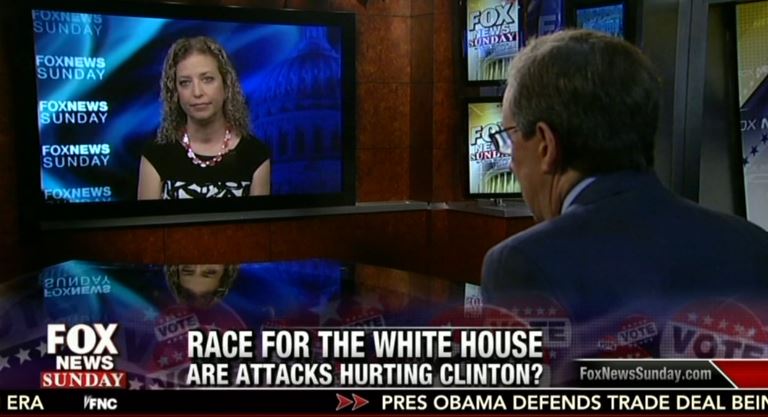 WALLACE: I -- I want to talk about one last subject with you congresswoman. You have dismissed the idea that Hillary Clinton could face any legal troubles over her private e-mail server as, quote, "ludicrous." How do you know that?

WASSERMAN SCHULTZ (after silence): I -- I'm simply confident that as the investigation continues, that Hillary Clinton has, made it clear, and there are scores of individuals who are associated with the federal government, that have indicated that it's clear that, she, conducted herself completely legally, that she was able to, use private e-mail just like previous, Republican and Democratic secretaries of state and, un, I think that --

WASSERMAN SCHULTZ: - At the end of the day, this is going to amount to nothing more than an investigation, when they take a close look. I think she's going to be fine.

WALLACE: Well -- well -- well, I -- the -- the reason I ask is, the FBI has, dozens of agents who have been investigating this issue for, months. And, just this week, FBI Director James Comey said that this could go on well past -- or at least past the Democratic convention in July. You know there's got to be something there that they’re investigating. Are you saying it's all a waste of time?

WASSERMAN SCHULTZ: I'm -- I’m not commenting on it one way or the other, other than to say that it is ludicrous to keep raising --

WALLACE: Well -- well, wait a minute. You have. You said it's ludicrous.

WASSERMAN SCHULTZ: Yes, and I'm going to say it again, it's ludicrous to keep raising the -- the question of whether, uh, this plays out to an end -- an unfortunate end. She’s -- Hillary Clinton has released 55,000 pages of e-mails. She -- the -- it -- has provided the most transparency of -- uh, of probably any previous presidential candidate in terms of the -- the, conversations that she’s had as, Secretary of State, as a public official. Uh, it is, uh, completely available for perusal by the press and she was doing something and using private e-mail in the same way, that previous secretaries of state have -- have done, and that’s according to the policy that she was allowed to.

WASSERMAN SCHULTZ: Other than the private --

WASSERMAN SCHULTZ: Other than the private server, right, with the exception --

WALLACE: Well, "other than the private server" is a big deal, and nobody had 30,000 work e-mails on their private server or private e-mail, period. So, I mean, the comparisons to Colin Powell are -- I mean that's just not true, congresswoman.

WASSERMAN SCHULTZ: The compare -- you know, it certainly is true, because Colin Powell, Condoleezza Rice, John Kerry all used private e-mail to communicate with their staff. And Hillary Clinton --

WASSERMAN SCHULTZ (after silence): I -- I -- I'm not counting, heh, but over the course of her -- of her term she used private e-mail and was allowed to use private e-mail. That's not in dispute. And she’s released 55,000 pages of e-mails. At the end of the day, this is a distraction because the American people are going to decide who they vote for, for president, based on who they believe is going to continue to move us forward and help everybody who wants to succeed have a fair shot to do so. And what they're not going to vote on is distractions like this one ...

Shorter Wasserman Schultz: "My favored candidate is great, other than the fact that she's the only one in the field under active investigation by the FBI, which of necessitiy is involved in tedious consultations with the nation's intelligence agencies."

Here's the truth. There is no reasonable doubt, based on what is already known about what Mrs. Clinton did, that she violated laws. In other words, she committed crimes, felonies in fact. This makes her a criminal. Whether or not she is indicted for having committed them will not change the fact that she committed them, and that she is therefore a criminal. Whether or not a candidate is a criminal is certainly a valid consideration when deciding whether that person should become this nation's commander in chief. Wasserman Schultz can cry "ludicrous" all she wants, and it doesn't change those basic, painful truths.