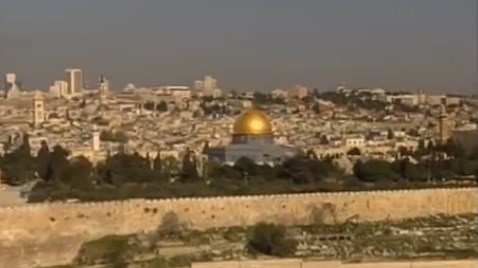 In an October 8 item at the New York Times ("Historical Certainty Proves Elusive at Jerusalem’s Holiest Place"), reporter Rick Gladstone pretended that it's an open question as to "whether" the two Jewish temples — one destroyed over 2,500 years ago and the second razed in roughly 60 A.D., ever existed on the 37-acre site known as the Temple Mount. In doing so, Gladstone gave credibility to Palestinians baselessly promoting "doubt that the temples ever existed — at least in that location."

There is no meaningful "doubt" on the subject at all. After what must have been a furious and completely justified backlash, the Times issued a correction on Friday (bold is mine):

An earlier version of this article misstated the question that many books and scholarly treatises have never definitively answered concerning the two ancient Jewish temples. The question is where precisely on the 37-acre Temple Mount site the temples had once stood, not whether the temples had ever existed there.

To truly unpack the significance of this correction, we need to see the specifics of everything the Times did to fully modify Gladstone's original writeup.

Fortunately, the indispensable web site NewsDiffs.org has captured exactly what had to be done:

Note the fourth-last paragraph in the excerpt above, as originally written, with a separate earlier paragraph provided for context:

... The historian Flavius Josephus, an eyewitness to Jerusalem in the first century, described the temple’s expansion under King Herod, surrounded by partition walls that were meant to separate gentiles and Jews. He also wrote about the temple’s destruction under the Romans.

... The most direct physical evidence of the temple’s existence is the Western Wall, an outer wall spared by Roman destruction. The wall has become a holy site in itself, drawing millions of Jews for prayer.

Translation: Even though the Western partition wall exists, we can't know for sure that the second Temple the Western wall was built to protect existed next to it.

Was the White House ever in Washington, D.C.? Can we ever really know for sure? Not unless we dig under the existing structure and find indisputable archaeological evidence of the original structure, which British general Robert Ross is said—by some sources—to have torched in August, 1814.

Any readers who still doubt that the Times treats obvious facts as fungible, and that the paper's management believes that there is no such thing as objective truth, need to go to this item about a conversation between former U.S. Ambassador to Israel Michael Oren and Times editorial-page editor Andrew Rosenthal — wherein Rosenthal will not unconditionally acknowledge that World War II's D-Day actually occurred.