Imagine my "surprise" (not really) when I came across a Thursday Daily Beast item originally referenced by Mark Levin on his radio show (HT Joe Newby at Examiner.com) about the comments of a "secular Muslim" in response to what 2016 Republican presidential contender Ben Carson had to say about whether he could support a strict, sharia-compliant Muslim to be this nation's chief executive.

The author of that column, Asra Q. Nomani, effectively made mincemeat out of a "fact check" written by Glenn Kessler at the Washington Post on Tuesday. You see, Kessler, in what must be his worst "fact check" ever, gave Carson's statement about the Muslim concept of taqiyya, namely that it "is a component of Sharia that allows, and even encourages you to lie to achieve your goals," a grade of "Four Pinocchios," i.e., "a whopper."

So I really have to wonder what Kessler makes of the latter paragraphs in the following excerpts from Ms. Nomani's column (bolds are mine):

To This Secular Muslim, Ben Carson Had a Point

Take it from someone who’s been fighting it her whole adult life: The sad truth is that too many Muslims want to mix mosque and state. 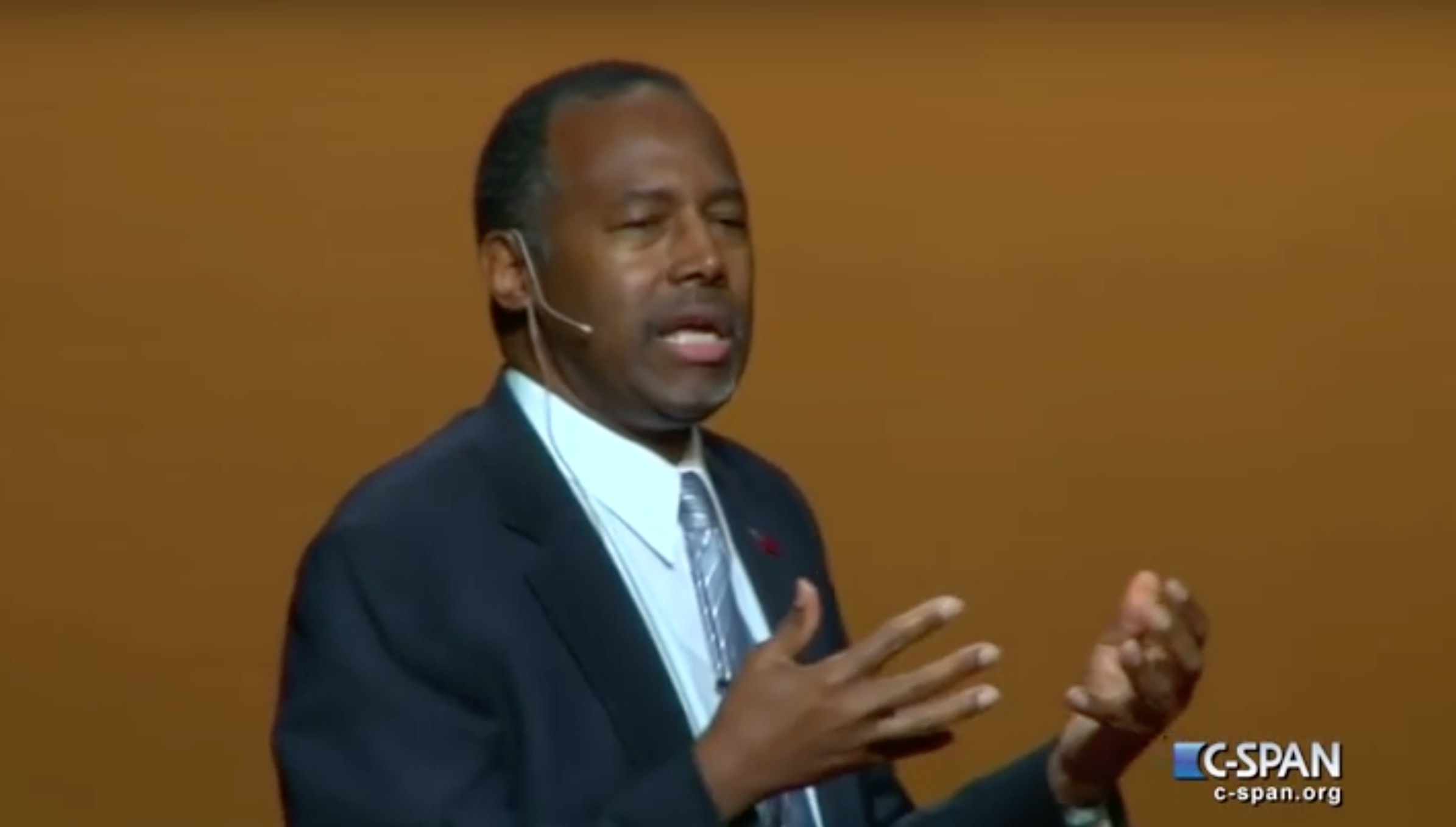 Ben Carson’s blunt remarks about a Muslim president triggered much outrage, even after he partially walked them back. But secular Muslims like me, who reject political Islam, understood what he meant: He doesn’t want a Muslim as president who doesn’t believe in the strict secular separation of mosque and state, so that the laws of the state aren’t at all touched by sharia, or Islamic law derived from the Quran and hadith, the sayings and traditions of prophet Muhammad. Neither do we. We really don’t want a first lady—or a president—in a burka, or face veil.

Carson’s comments underscore a political reality in which Muslim communities, not only in far-flung theocracies like Saudi Arabia and Iran, but also in the United States, still struggle with existential questions about whether Islam is compatible with democracy and secularism. This struggle results in the very real phenomenon of “creeping sharia,” as critics in the West call it (and which some Muslims like to mock as an “Islamophobic” allegation).

... It’s not “time to pull the plug” on Carson’s campaign for his indelicate comments on Islam ... But it is time to continue the politically incorrect but critical conversation that he started.

The presidential candidate is talking against a backdrop of 9/11 and a reality in which political Islam expresses itself violently in the West and in Muslim countries from Iraq to Indonesia. To me, not acknowledging this real issue among Muslims amounts to another Carson allegation, of Muslims practicing taqiyya, or deception.

Imagine that. A Muslim in a position to know has acknowledged that taqiyya means far more than the "Islamic scholars" the Post's Kessler consulted.

Kessler's experts would only admit that taqiyya involves lying under direct and serious duress:

Essentially, the Koran suggests that a person who faces religious persecution can withhold the identity of their faith in order to avoid bodily harm or death. The concept was particularly embraced by Shiites, who took steps to hide their religious beliefs from the majority Sunnis. (Indeed, part of the reason for Sunni distrust of Shiites is because Sunnis regard taqiyya as part of Shiite practice.)

“Yes, it is permissible to hide the fact you are Muslim” if a person is under threat, “as long as it does not involve hurting another person,” Abou El Fadl said. “But there is no concept that would encourage a Muslim to lie to pursue a goal. That is a complete invention. Any Muslim is raised on the idea that lying is a sin.”

“It is a dispensation within some aspects of Shia law, which was developed out of the experience of a persecuted religious minority,” said Omid Safi, director of the Duke University Islamic Studies Center. “In brief, it states to value human life over declaration of faith. It is the proverbial question: If a Shia is being persecuted, and someone holds a gun to your head asking ‘are you a Shia?’ you are allowed to say ‘no’ in order to save a human life.”

Another expert on Islamic law, Noah Feldman of Harvard Law School, agreed that Carson’s comment was “very much oversimplified to the point of misrepresentation.” As Feldman put it, “taqiyya is dissimulation when one is being oppressed or tortured or having one’s views banned, a bit like Jesuit dispensation to lie under oath when your life is in danger.”

Safi said “the Taqiyya conversation is today part and parcel of the Islamophobic attack against American Muslims,” in which no matter what a Muslim says, he or she can’t be trusted.

... Carson is mouthing a discredited and inaccurate interpretation of a relatively minor section of the Koran, with the apparent aim of painting all Muslims as untrustworthy. There is no evidence that the Koran encourages Muslims to lie in pursuit of goals. He earns Four Pinocchios.

Sorry, Glenn. What happened here is that your "scholars" and "experts" engaged in taqiyya in the name of denying its true meaning — and you were completely duped.

I'll let Raymond Ibrahim, one of those people you summarily dismissed as "Internet scholars," explain:

According to the authoritative Arabic text, Al-Taqiyya Fi Al-Islam: "Taqiyya [deception] is of fundamental importance in Islam. Practically every Islamic sect agrees to it and practices it. We can go so far as to say that the practice of taqiyya is mainstream in Islam, and that those few sects not practicing it diverge from the mainstream...Taqiyya is very prevalent in Islamic politics, especially in the modern era."

The primary Quranic verse sanctioning deception with respect to non-Muslims states: "Let believers not take for friends and allies infidels instead of believers. Whoever does this shall have no relationship left with Allah – unless you but guard yourselves against them, taking precautions." (Quran 3:28; see also 2:173; 2:185; 4:29; 22:78; 40:28.)

Al-Tabari's (838-923 AD) Tafsir, or Quranic exegeses, is essentially a standard reference in the entire Muslim world. Regarding 3:28, he wrote: "If you [Muslims] are under their [infidels'] authority, fearing for yourselves, behave loyally to them, with your tongue, while harbouring inner animosity for them... Allah has forbidden believers from being friendly or on intimate terms with the infidels in place of believers – except when infidels are above them [in authority]. In such a scenario, let them act friendly towards them."

Now let's bring in the supposedly "extreme" but actually quite mainstream version of jihad, as explained at Catholic Answers:

Because of the need to expand God’s dominion by wars of conquest, Islam’s ideology imposes on Muslims the duty to fight for God’s community. This duty is known as jihad (Arabic, "struggle, fight"). Although it is binding on all Muslims, it has been particularly incumbent on those on the edges of the Muslim world, where there was room for expansion. Only by continual jihad could the manifest destiny of Islam to bring the world into submission to God be fulfilled.

As eminent French sociologist Jacques Ellul notes, "Jihad is a religious obligation. It forms part of the duties that the believer must fulfill; it is Islam’s normal path to expansion."

Deception, or taqiyya, especially in the name of advancing Islam via jihad is thus not only accepted by many Muslims. It is considered a requirement.

Sorry to burst your ignorant bubble, Glenn Kessler. You're the one who gets four big fat Pinocchios for your "whopper." For your penance, you get to read up on Tawriya, Islam's permission to use language that is deliberately ambiguous.