Most of us have heard it by now. If you have the audacity to point out in a conversation or speech that "All lives matter," you're a hateful, violent raging racist out to undermine the (white guy George Soros-funded) "Black Lives Matter" movement. Democratic presidential candidates Hillary Clinton and Martin O'Malley have toth made the "mistake" of contending that "All lives matter" during the past few months. Each has felt it necessary to either apologize or otherwise back away from their statement.

A Thursday Rasmussen poll the vast majority of the establishment press has ignored and will likely to continue to ignore is telling us that the  (white guy George Soros-funded, co-led by a guy who his family says he is white) "Black Lives Matter" movement has a lot of work to do on what they would consider to be the home front.

Rasmussen's poll tells us that two-thirds of blacks answering the question prefer the statement "All lives matter" over "Black lives matter" (bolds are mine): 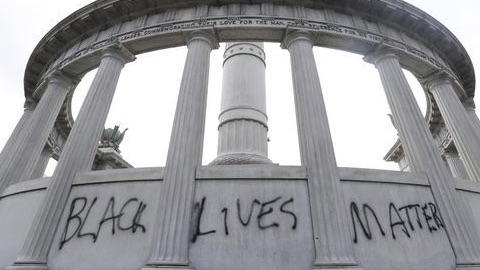 Yes, black lives matter, but don’t all lives matter? That seems to be the subject of some political dispute.

“Black lives matter” was initially a slogan used by those protesting what they see as excessive police violence against blacks in this country but now has been adopted as the name of a political organization. Hillary Clinton is the latest major politician confronted by the Black Lives Matter organization, and she has asked them for guidance on how to address the criminal justice issue.

Voters are suspicious of why politicians deal with racial issues. Only 17% believe they raise those issues to address real problems. Seventy percent (70%) say they do so just to get elected, although that’s down from 78% last November. Fourteen percent (14%) are undecided.

To its credit, The Hill has a story on the poll. To their detriment, searches at the Associated Press, New York Times, Washington Post and Los Angeles Times indicate that they don't have stories. A Google News search on "Rasmussen black lives matter" (not in quotes, sorted by date) indicates that no one else in the establishment press is treating Rasmussen's result as news.

While it's unfortunate that blacks prefer "Black lives matter" over "All lives matter" at triple the rate of other groups, the fact that two-thirds of blacks haven't bought into the movement's efforts at intimidation is encouraging — to average Americans, but certainly not the press, which wants to treat the (white guy George Soros-funded, co-led by a guy whose family says he is white) movement as the next generation of go-to civil rights hustlers.