In Phoenix this weekend, "Black Lives Matter" disruptors crashed the "Netroots" convention, an event the Associated Press described as a gathering of "some of the party's most influential liberal activists."

On ABC's This Week yesterday, Bill Kristol had the temerity to mention some of the details of the chaos. Show host Martha Raddatz changed the subject faster than you can say "deeply divided Democrats."

One thing you cannot do on Big Three network television is talk about how the deliberately disruptive, outsider-financed "Black Lives Matter" movement has taken hold inside the Democratic Party's mainstream, forcing its candidates to take unreasonable and offensive positions on matters involving alleged "social justice" to remain viable. As Hillary Clinton learned last month in Missouri, you can't even make an obvious statement which would have been completely innocuous less than a year ago — i.e., that "All lives matter" — without now alienating hordes of leftists who might otherwise support you.

As Gateway Pundit described it, "Black Lives Matter" disruptors "basically staged a mutiny and took over the stage." The UK Guardian reported that 2016 presidential candidates Martin O'Malley and Bernie Sanders "were heckled and constantly interrupted" during their speeches.

Raddatz asked Kristol, after a discussion focused on Donald Trump, to identify GOP presidential candidate Scott Walker's "vulnerability." (If you're waiting for someone like Raddatz to ask a leftist about Hillary Clinton's weaknesses or vulnerabilities, you'd better have a lot of time on your hands, because such a question won't appear anytime soon.)

Kristol was having none of it. Though a smartaleck "Walker waited until his second term to sign right-to-work legislation instead of doing it earlier" would have been a pretty good answer, Kristol, with former Michigan Governor Jennifer Granholm's inadvertent help, deftly changed the subject, to the Democrats' just-exposed and now-visible weakness (HT Sooper Mexican):

MARTHA RADDATZ: Also, Scott Walker jumped into the race this week. He's still doing well in the polls, both in Iowa and nationally. What's his (Scott Walker's) vulnerability? 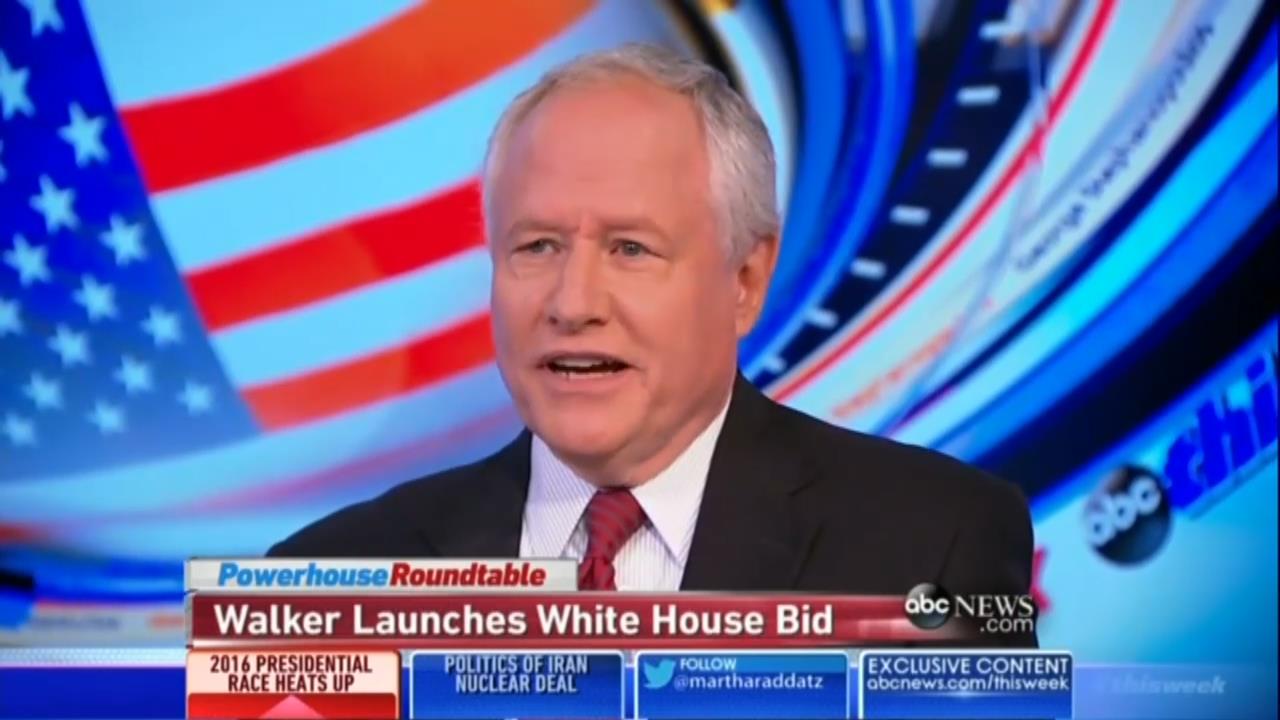 KRISTOL: Yeah, I think he's a strong candidate. He's a Midwestern governor who governed successfully, won three times in four years in a state that President Obama carried twice in that same period.

And I think that the Trump vote will go away. I don't buy the argument that there are a huge number of unhap-, Jennifer wants to make it seem like this huge chunk of the Republican Party is vitriolic —

JENNIFER GRANHOLM: I think that there is a number —

KRISTOL: It was the Democrats yesterday who hooted at a huge left-wing convention, who hooted Bernie Sanders and O'Malley, Governor O'Malley off the stage for not being left-wing enough.

RADDATZ: I want to move on to Iran, since I just got back from Iran ...

We can't talk about deeply divided Democrats on national TV.