Inskeep explained that somehow, Thornton discovered the "very conservative" Focus on the Family radio show when it was the only talk she could get in northern Minnesota. Do we really believe you can't get an NPR signal in northern Minnesota? From my college years there, I don't. But then there's this:

Thornton learned that conservative radio is as old as radio, but it grew in the 1990s, when looser federal regulations made it easier to give one-sided opinions on the radio without equal time for other views.

Earth to Inskeep! Earth to Inskeep! NPR is one-sided opinion on the radio without equal time for other views....including when they're ripping conservative talk radio. This came on the same morning that Inskeep devoted seven-minute interviews to Homeland Security Secretary Alejandro Majorkas and National Security Adviser Jake Sullivan.

After citing radio hosts Eric Metaxas and Charlie Kirk for being extremely devoted to Donald Trump, Inskeep turned to the lodestar: 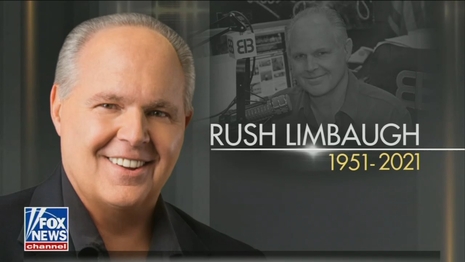 INSKEEP: One star rose above all.

RUSH LIMBAUGH clip: Talk about a woman who's not anything without her husband. It's Raisa Gorbachev.

UNIDENTIFIED PERSON: She has a Ph.D.

RUSH LIMBAUGH: You know what that Ph.D. is? It means you go to a Marxism course for 20 minutes.

Second RUSH LIMBAUGH clip: Let me put it to you this way. The NFL, all too often, looks like a game between the Bloods and the Crips without any weapons.

STEVE INSKEEP: Rush Limbaugh inspired many imitators. He also shared the dial with conservative religious broadcasters. And of today's influential companies, a big one is the Salem Media Group.

Salem spokesman Phil Boyce was allowed to explain that their network isn't just pumping out propaganda they don't believe. They're trying to save America:

INSKEEP: Sometimes, when people report on Fox News, they will make the observation that people at Fox News do not necessarily believe everything that is said on Fox News, that they're in a business. They're just saying things, in some or many cases, rather than saying what they believe. When you spoke with Phil Boyce, a top executive of the Salem Media Group, did he indicate that he believes what he's doing?

THORNTON: Yes, absolutely. I think that, sometimes, the idea that people are only in it for the money almost sort of degrades the influence that this has. Absolutely, there is an ideological motivation, as well. I was sort of expecting to get sort of a wall of professionalism, you know, a lot of sort of media-trained PR speak, in a way. And I was very surprised - and honestly quite grateful - for the honesty that he showed me in demonstrating that this really, really is an ideological project from top to bottom.

(SOUNDBITE OF PODCAST, "THE DIVIDED DIAL")

PHIL BOYCE: There is something different about Salem that I think you need to understand. The difference with Salem is even though we always want to make money - and we do make money - we're in this to save America.

THORNTON: Something that he said is that he wants the country to sort of go back to what he saw as the conservative and Christian values that it was founded on, which I think many people, including many evangelical and Christian scholars, have contested. But he described something called the Salem worldview, which he said they don't have anything necessarily in writing about. But it's sort of a gut feeling that they have within Salem, within the leadership and within their house.

(SOUNDBITE OF PODCAST, "THE DIVIDED DIAL")

BOYCE: We believe that America is the greatest country on Earth, and we should do everything we can to protect the Constitution, to help foster the conservative values that we think the country was founded on. We think we're performing a really important job in America.

Inskeep didn't disclose to the audience that Thornton's "Divided Dial" series is actually part of the public-radio program On The Media from NPR affiliate WNYC. In other words, this whole thing is "public radio" attacking "right-wing radio."

Thornton concluded by noting Boyce "argued that they're just sharing their opinions. And something I mentioned was that when I listen to conservative talk radio, I don't hear these perspectives shared as opinions. I hear them shared as fact."

Once again, NPR can't look itself in the mirror and see that they do that!