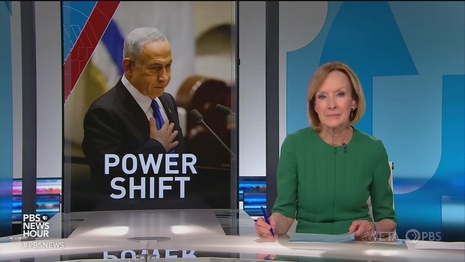 Thursday's PBS NewsHour broke out every term for extremism in reporting on the new Israeli government. The online headline for the segment was "Netanyahu once again prime minister with most far-right government in Israel’s history."

Anchor Judy Woorduff began with the C-word: "Benjamin Netanyahu was sworn in as prime minister today in Israel, but his Cabinet and his government's platform are controversial."

She turned to PBS reporter John Yang, who ran a perfunctory soundbite of Netanyahu, followed by savage soundbites from the left. First, from protesters:

IIFTACH TALMY, Israeli Protester: I came to demonstrate against the government that is about to rise up in Israel, horrible government. A lot of criminals are sitting there. And they wish to destroy the Israeli democracy.

Yang warned the new coalition agreed on "Giving lawmakers veto power over Supreme Court decisions, allowing businesses, including physicians, to discriminate against serving LGBTQ people based on religious beliefs, and perhaps the most controversial, declaring the Jewish people's exclusive and inalienable right to all parts of the land of Israel, including the West Bank. With tensions already running high, Palestinian officials anticipate the most challenging period ever in Israeli-Palestinian relations."

Notice that no one on the Palestinian side of this conflict is described as extreme or "ultra" anything.

And I know for a fact that the international community will not deal with many members of this government. Therefore, to us, we are against all the governments that practice killing and oppression our people.

Then Yang introduced an interview with David Makovsky of the Washington Institute for Near East Policy, who identified himself as part of President Obama's Middle East team. Makovsky said Netanyahu has "kind of thrown his playbook out the window. And instead of going with kind of a center-right independence and the like, he's moved over to a more populist, I would even say radical right." The labeling continued:

MAKOVSKY: When the center and the left said, we're not going with you, and the hard right says, we will go with you, he sees there they're going to extricate him from his trial. They don't trust him because they don't think he's hard right. And they're saying, we're not going to do that up front. But after you have delivered for us, then we would pass some legislation.

So the question is, how beholden is he and also how embittered is he, that he believes that it's an elite judiciary coming up with these charges against him, they're out to get him? So some say he uses it politically. Others say it has really embittered him, and he's going to go with this hard right all the way because they are like his get-out-of-jail-free card.