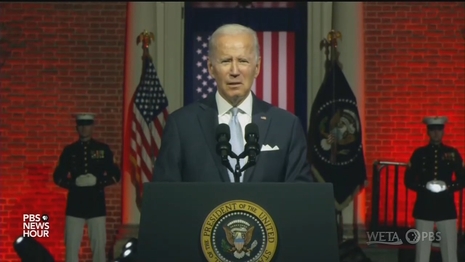 President Biden gave a nasty primetime speech on Thursday night on how 'MAGA Republicans' are a threat to American democracy, and the media celebrated it as "reclaiming patriotism." He explicitly called out the entire Republican Party as threatening the future of democracy in America.

Meanwhile, Geoffrey Dickens joins the show to discuss his latest chronicle of how the network newscasts of ABC, CBS, and NBC skip each and every juicy tidbit of Hunter Biden's shady business dealings, and especially the ones which involve meeting with "The Big Guy."

All the recent reporting from the contents of the Hunter laptop underline that Joe Biden has lied repeatedly that he had nothing to do with Hunter's foreign business dealings. There's not just records of Biden meeting with Hunter's clients, there are pictures. It's not as if TV news could find nothing to report here, and it's obvious if they had stumbled into Donald Trump Jr.'s laptop, it probably would have driven a hundred stories on these networks.