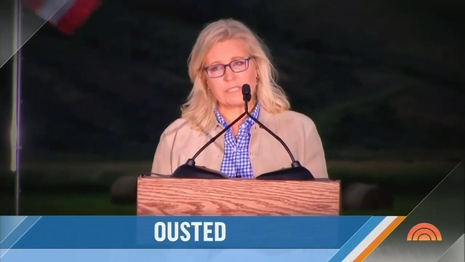 Liz Cheney lost her Wyoming primary election by 37 points. But the concession speech didn't so much concede as announce a new crusade, a quixotic campaign to drag down Donald Trump in any way possible before the 2024 election.

When she lost, CNN analyst Nia-Malika Henderson accurately explained that her base was no longer in Wyoming. It's the “Beltway media.” It's more than that —  it inspires the Left from New York to Hollywood. They want to portray it as both impossible and irresistible.

Cheney's been raising millions from Democrats who want to stir up this campaign as another goad to Trump. Many Republicans would like to try a different flavor than Trump the next time around, but it's time to imagine that just as they've been doing in the midterm primaries, the Democrats deeply desire another run by Trump -- this time, the Trump that goaded on a riot and refused to concede defeat. They want him, damaged and angry.

The Democrats and their media partners like the narrative that Trump has a “death grip” on the Republican Party, because death is what they seek. They boast about how they are the saviors of democracy when what they really want is to shut the “ignorant” half of America up.

PBS NewsHour pundit David Brooks was one of many to talk up Liz for Prez. “She'd be a formidable candidate in some way, I think she'd get a lot of funding,” he said. “She'd get a lot of media attention.” With all this fawning at her feet, she's already posing as the Abe Lincoln of this century.

He didn't say she would run to please PBS and The New York Times and moneybags Hollywood titans like Jeffrey Katzenberg. She's the liberal-media entry making trouble inside the GOP. The Democrats want her to be “formidable” to do their bidding.

Brooks said the question should be “Could she get on the debate stage with Donald Trump? The Republican National Committee would do everything possible to prevent that.” I'm not sure that is true. The RNC is seeking to avoid subjecting their candidates to “moderators” like John Harwood who sound like a Biden press secretary in waiting.

Then Brooks added “I don't think there's a mainstream media organization who would host a Republican debate without Liz Cheney on the stage. And so that has some power. And I assume every non-Trump candidate wants her on the stage.”

I don't know why someone like Ron DeSantis would want Liz Cheney on the stage, given that she proclaimed he is nearly as bad as Trump, another threat to democracy and the Constitution.

Then Brooks claimed that he really felt a month or two ago that “a lot of Republicans wanted to move on” from Trump. But then Biden's attorney general signed off on a raid of Trump's Florida home at Mar-a-Lago. So “this is now Donald Trump's party. If he wants the nomination, he can get it. He will get it.”

Brooks said he had read that an unnamed consultant to DeSantis said the FBI raid closed all avenues for other Republicans to secure the nomination. So again, we should ask: was this unprecedented government action part of a political plot to give Democrats the sacrificial lamb they want in 2024?