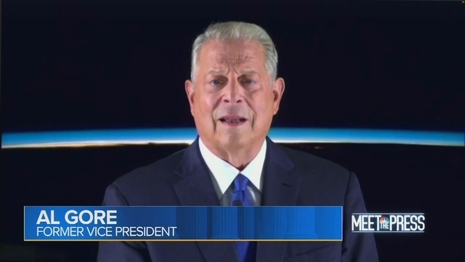 In a maddening round of softball Sunday interviews, network anchors gushed all over Al Gore on ABC and NBC. Chuck Todd asked a series of easy queries, ending with asking Al Gore if he would run for president again -- 24 years after his last run. Gore compared "climate deniers" to the police who did nothing while children were shot dead in Uvalde, Texas, and Chuck Todd didn't blink.

Todd actually moved on to make three false statements about how the American people are all on one side -- the liberal side -- on abortion, guns, and climate. It's not Meet the Press, it's more like Caressed by the Press.

Then there were the Liz Cheney interviews. On CNN, Jake Tapper offered a series of softball questions about how the Pelosi-picked January 6 panel would proceed, and then in a second segment, underlined how Cheney would probably lose her congressional primary in Wyoming because she's for "the truth." Then Tapper asked her if she would run for president. As with Al Gore, this was more a compliment than a serious question. Which state would Liz Cheney win when she's dramatically unpopular among Republicans?

At least Fox News Sunday host Bret Baier threw an unexpected question: What did she think of Hunter Biden and his family raking big bucks from communist China? Cheney actually said that she didn't know enough about it. Baier's question underlined she's spending all of her time obsessing over the last president and ignoring the current one.

Finally, Stephen Colbert expressed his deep love for the January 6 Committee. Enjoy the podcast below, or wherever you listen to podcasts.