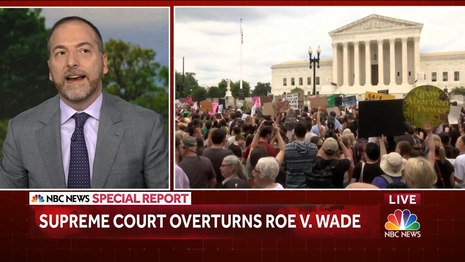 Most of the political junkies were surprised with a Friday decision overturning Roe vs. Wade, and the liberals were wailing and gnashing their teeth. But let's have a little joy before we chronicle the media meltdowns. This was a great day for people who have advocated for unborn children for decades, people who've marched and shivered through the January "March for Life" rallies.

But the liberals melted down, starting with Chuck Todd on NBC, who blamed Donald Trump for leading America to this low point. He "shattered a lot of stability we had in American society. He has been the linchpin of shattering stability on reproductive rights, stability on immigration, stability in some ways obviously on the democracy."

MSNBC legal analyst Joyce Vance called it a "very dark day in America" where "I’m not sure we all fully appreciated how devastating it would feel to to see the words on the paper condemning women to second-class citizenship." Apparently, the unborn weren't citizens at all.

Research director Scott Whitlock joined the conversation and shared his study about the somewhat shocking omission of the radical group "Jane's Revenge" and their promises of violent protest. At the same time these networks are burying viewers in talk of the violent Proud Boys at the Capitol Hill riot, they can't even say the words "Jane's Revenge."