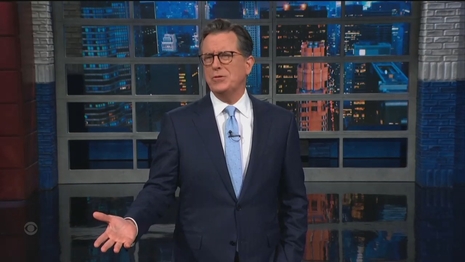 On Monday's Late Show, CBS host Stephen Colbert addressed the arrest of seven staffers filming after-hours in the Longworth House Office Building in his opening monologue. He made light of how they were committing "first-degree puppetry" and then blamed the sensitivity of the Capitol Police on "Putin's puppet" for causing the January 6 riots.

Colbert explained that after two full days of filming in congressional office buildings, "After they’d finished their interviews, [my staffers] were doing some last-minute puppetry and jokey make-em-ups in a hallway, when Triumph and my folks were approached and detained by Capitol Police." He didn't address Fox News reporting his team had been "escorted out of the Jan. 6 committee hearing earlier in the day because they did not have proper press credentials."

But he did mock Fox News this way: "The Capitol Police are much more cautious than they were, say, 18 months ago, and for a very good reason. If you don't know what that reason is, I know what news network you watch." The crowd laughed and roared.

"The Capitol Police were just doing their job, my staff was just doing their job, everyone was very professional, everyone was very calm," the host continued. "My staffers were detained, processed and released. A very unpleasant experience for my staff. A lot of paperwork for the Capitol police but a fairly simple story… until the next night when a couple of the TV people started claiming that my puppet squad had quote, ‘committed insurrection’ at the U.S. Capitol building."

Colbert displayed a New York Times headline but did not explain the Times was quoting Tucker Carlson. He then huffed that he was shocked that he has to "explain the difference, but an insurrection involves disrupting the lawful actions of Congress and howling for the blood of elected leaders – all to prevent the peaceful transfer of power." He didn't get the point that many people were arrested on January 6 for walking around unauthorized in the Capitol.

Then came the moral preening.

Now, it's predictable why these TV talkers are talking like this on the TV. They want to talk about something other than the January 6 hearings on the actual seditionist insurrection that led to the deaths of multiple people, and the injury of over 140 police officers. But drawing any equivalence between rioters storming our Capitol to prevent the counting of electoral ballots and a cigar-chomping toy dog, is a shameful and grotesque insult to the memory of everyone who died, and obscenely trivializes the service and the courage the Capitol Police showed on that terrible day. But who knows.? Maybe there was a vast conspiracy to overthrow the government of the United States with a rubber Rottweiler.

After some jokes about rioting Fraggles, Colbert concluded:

In this case, our puppet was just a puppet doing puppet stuff. And, sad to say, so much has changed in Washington that the Capitol Police do have to stay at high alert at all times because of the attack on January 6. And as the hearings prove more clearly every day, the blame for that actual insurrection all lies with Putin's puppet.

Colbert's comedy-laced discussion of his staff being arrested was brought to you in part by Starbucks.