ABC’s Good Morning America put Hunter Biden into the news – a rare event – with an interview with his ex-wife Kathleen Buhle, who has a new memoir out on their turbulent life together.

ROBACH: At what point in your marriage did you realize that Hunter had a drinking problem?

BUHLE: With addiction especially, there’s so much shame surrounding it that it becomes something that we don’t talk about?

ROBACH: We’ve seen images of Hunter, the ones that were on his laptop looking disheveled. Was that the husband you knew in moments at times?

BUHLE: Not at all. He was struggling under a massive drug addiction and that’s heartbreaking and painful and that wasn’t who I was married to.

On Burisma, Robach was much tougher when she interviewed Hunter. This exchange seem designed to downplay his shameless buck-raking. After all, Mrs. Hunter was a beneficiary of the family business.

ROBACH: I sat down with Hunter back in 2019. I asked him specifically whether or not he would have been asked to be on that Burisma board if his last name hadn’t been Biden and he said to me, "I don’t know, probably not. I don’t think there’s a lot of things that would have happened in my life if my last name wasn’t Biden." Would you agree with that?

BUHLE: Not entirely. Trying to get someone to parse out what parts of their life, you know, came from their parents is in my mind not a healthy exercise, so I think he has always acknowledged the benefit and advantage of coming from a prominent family.

ROBACH: Did he deliberately curry favor or seek profit based on who his father was, that’s the question people ask. In your experience as his wife did you see that?

BUHLE: I see someone who loved his father, respected his parents and was proud to be their son.

If this sounds like someone trying to stay in the First Family, you should know her daughter Naomi has a White House wedding coming up. In an almost seven-minute interview, it took them more than four minutes to get to Hunter cheating with his brother Beau’s widow, Hallie. 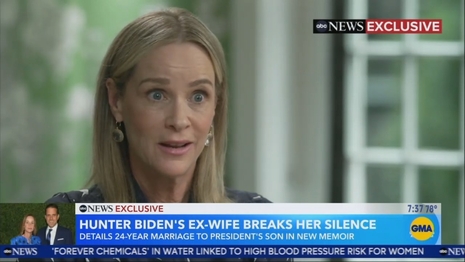 ROBACH: Buhle also recounts the day she learned of Biden’s relationship with her late brother-in-law’s widow Hallie, after Beau passed away. But while she and Hunter were still married. she says one of her daughters found text messages between her father and her aunt on his phone and called their therapist to help tell Kathleen.

Did Joe or Jill Biden ever talk to you about what happened? I mean I know they put out a statement. I don’t know how that made you feel? Saying they supported the relationship between Hunter and Hallie.

BUHLE: The one thing I’ve never ever questioned was Joe and Jill’s love and attention to my three daughters. Divorce was hard on all of us because we were very close but we come together out of a shared love for my daughters.

This raises the obvious inference that she has questioned Joe and Jill's love for her, but that was just left there. ABC also skipped asking about Hunter's daughter with stripper Lunden Roberts, but they could claim hey, that came after the divorce.

This very edited episode was brought to you in part by Target.