National Public Radio has made it clear over the years that it despises Fox News. On June 9, the morning before the primetime Pelosi Panel hearing, Morning Edition promoted a radical leftist group of censors that wants Fox News beheaded. Of course, NPR never called them "leftist" or anything ideological on air as they aim to starve Fox News of digital ads. (The online story uses "left-leaning" in paragraph nine.)

The story was headlined "Group aiming to defund disinformation tries to drain Fox News of online advertising." The leader of the group "Check My Ads" was just a former marketer. The NPR story began:

BOBBY ALLYN: Former marketer Nandini Jammi wanted to fight the spread of disinformation online and turned to something she knew a lot about - advertising.

NANDINI JAMMI: We started to ask this question, why is the advertising industry still funding hate speech, even though advertisers have made it so clear that they don't want to be anywhere near it?

Later that day, Jammi made it clear what NPR signed up to promote : 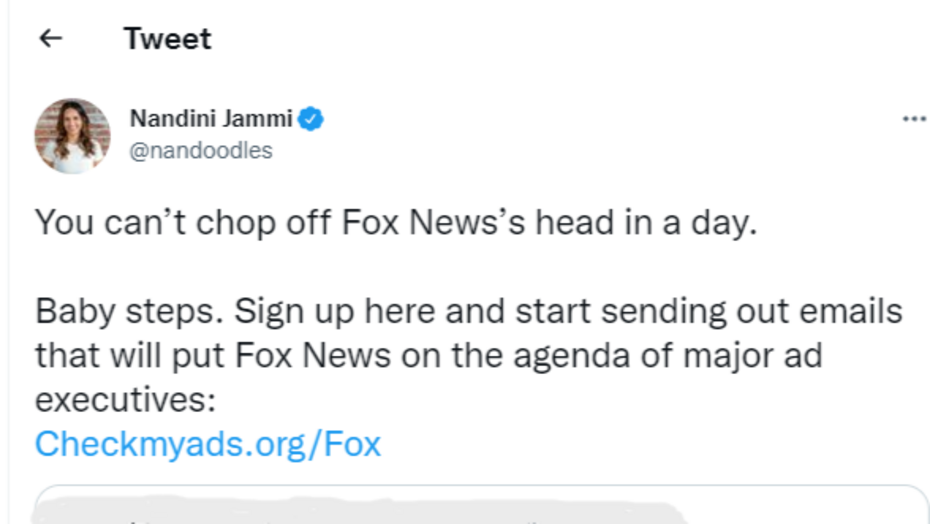 Naturally, former CNN president Jon Klein -- the guy who canceled Crossfire because liberals couldn't stand an opposing view -- is here noting that funding hate speech is "the nightmare of most responsible marketers."

BOBBY ALLYN: Now with the congressional hearings into the January 6 attack on the Capitol getting under way, Check My Ads hopes it will have success going after a bigger target - Fox News' website and its popular YouTube channel. Mikel Ellcessor is the group's chief operating officer.

MIKEL ELLCESSOR: Now all we're doing is we're saying, why is Fox News and specifically foxnews.com getting a pass?

ALLYN: Ellcessor points to Fox News star Tucker Carlson, who has expressed sympathy for the rioters who stormed the Capitol while dismissing the importance of the events that day. He also has spread falsehoods about the 2020 presidential election. Atkin says the group is calling on the public to pressure ad exchanges run by companies like Google and Verizon to block Fox from receiving online ads.

CLAIRE ATKIN: Advertisers have said over and over again, we don't want to fund violence. And so it's shocking that Fox News is still receiving these ad dollars.

NPR proves it's a left-wing platform by equating Fox News with violence and "disinformation." The only dissent was a statement from FNC:

ALLYN: In a statement, Fox News dismissed the campaign as an effort at censorship, saying, quote, "there's no greater threat to democracy than the effort to silence free speech." The cable network also said it takes pride in featuring more dissenting views than other cable news outlets.

Taking on Fox is no easy feat. First, the big ad exchanges may fear a backlash from conservatives. And even if the campaign is successful, it wouldn't kneecap Fox. About 95% of Fox's profits come from its cable division, so losing online ads would barely put a dent in the company financially. But Check My Ads co-founder Jammi isn't deterred.

JAMMI: We can do more than just complain and be sad and tweet and share with each other that we're sad about where Fox News is taking us as a country. We can actually fight back.

ALLYN: According to an estimate by ComScore and NewsGuard, disinformation online generates about $2 billion a year in advertising revenue. Check My Ads says their aim is not just to take that money out of circulation, but also to push the online advertising industry to be more transparent about how ads wind up on sites in the first place.

Depriving the conservative media of any revenue is simply another day for "democracy" at NPR.

I wouldn’t be surprised if Fox execs told him to stfu bc last time he messed with us, he lost his @googleads account — and his show on Fox Nation that could be next. pic.twitter.com/DPdh2yemUd