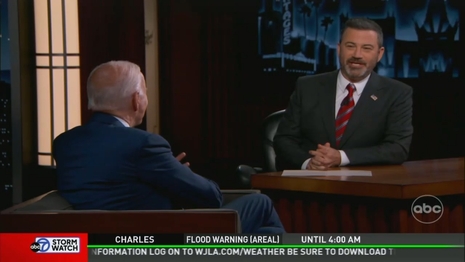 President Biden hasn’t granted an interview to a news outlet since February 10. Some might energetically assert these four months of avoidance ended on June 8 when Biden sat down on ABC’s Jimmy Kimmel Live. But absolutely no one should consider this 24-minute sponge bath a news interview. It sounded more like a friendly conversation at the Los Angeles County Democratic Party.

The only way you could consider Kimmel “tough” on Biden is complaining, like other Democrats, that “we” voted in droves and “we” have the majorities in Congress and yet “we’ve made very little progress” on the liberal agenda of abortion, climate change, and “voting rights.” This might explain why Kimmel joked in his introduction “I am proud to say I voted for him dozens of times.”

It was slightly more political than last December, when NBC late-night host Jimmy Fallon granted Biden 16.5 minutes to unload all his talking points so they could be showered across TV news shows.

Some conservatives said the press should be outraged that the president skips the news interviews and talks to comedians instead. But the networks obediently air lots of positive-sounding clips and tout the wisdom of Biden in avoiding their questions. On CBS Mornings, White House reporter Ed O’Keefe ran Kimmel clips and explained “The president appears to be trying to connect with Americans on a more personal level. Something many White House hopefuls have done for decades on late-night TV.”

Before the Kimmel interview aired, CNN media analyst Bill Carter cheerfully reported it would “give him a forum where he can be relaxed and maybe have some laughs and joke around, and  it will be a positive thing for him.” Carter added Biden could use "a bit of exposure that may not be too challenging for him.”

CNN thinks it’s fine that Biden skips Anderson Cooper and everyone else there because it’s “too challenging for him.”

This was easy-peasy. On gun control, Kimmel asked Biden if Senators should all have to sit with the families of dead kids in Texas, like Biden did. He asked about how Republicans won’t play ball: “It's like you're playing Monopoly with somebody who won't pass "Go," won't follow any of the rules, and how do you ever make any progress if they're not following the rules?”

On abortion, Kimmel’s “question” was “Boy, these things just keep coming at you, don't they? ...what a terrible job you have. I'm glad you're doing it, but boy oh boy, does this seem like a bad gig.”

Kimmel never asked about inflation. Biden brought it up unassisted – to make an argument for slapping price controls on insulin.

The economy, rising crime, a border crisis – all of these make Biden and the Democrats unpopular. But Kimmel could only complain about the stupidity of the public. "Maybe it's just that Americans aren't as knowledgeable as they should be, or maybe there's a death star pumping false information into our brains."

But Biden hates dealing with the press overall, complaining to Kimmel “even the really good reporters, they have to get a number of clicks on nightly news. So instead of asking a question … anyway – it’s just, everything gets sensationalized.”

He’d rather just stick to interviews with obsequious comedians like Kimmel who polish his aviator sunglasses and compare him to Tom Cruise.