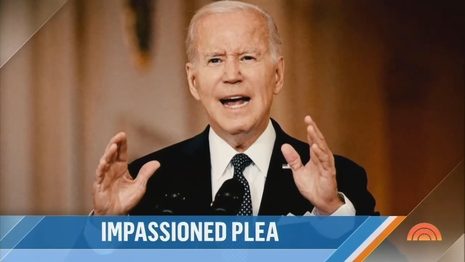 In the heated environment after two mass shootings, we review all the calls for banning "assault weapons" and AR-15s. MSNBC's Nicolle Wallace said that Republicans are "swathed in frothy delusion" that somebody is coming to take their guns. Really? From Whoopi Goldberg to Michael Moore, liberals were talking up banning guns and repealing the Second Amendment.

Our Nick Fondacaro joins the show to pick apart the "facts" the gun-grabber media gets wrong as they promoted President Biden's "impassioned plea" on live TV to ban "assault weapons." After the Biden speech, ABC anchor David Muir passed along a typical claim that mass shootings have "tripled" since Clinton's "assault weapons" ban expired in 2004. But the liberals have redefined "mass shootings" to be any event where four people are shot.

While most people hear "mass shootings" and think many people died. But sociologist James Alan Fox, who counts mass shootings for USA Today, says this larger estimate from the "Gun Violence Archive" counts much less lethal events. “On average, there’s one person killed per case. Like half of the cases, no one gets killed. And three-quarters, it’s either none or one.” It's still scary, but it's not as horrible.