After noting The New York Times found guns have been featured in over 100 Republican ads this cycle, Mohyeldin touted "today, we got some of the first general election ads from Democrats in this upcoming cycle and some Democrats appear ready to make Republicans pay a political price for their controversial stances on things like guns and abortion." He played them for free! How generous.

In the Stacey Abrams ad, the announcer says Brian Kemp it taking Georgia backwards. "He put us backwards on guns, said law enforcement, and made it easier for criminals to carry guns in public. He rolled back women's rights, vowing to make abortion a crime with ten years in prison. Just when we need to move forward, Brian Kemp keeps moving us back." 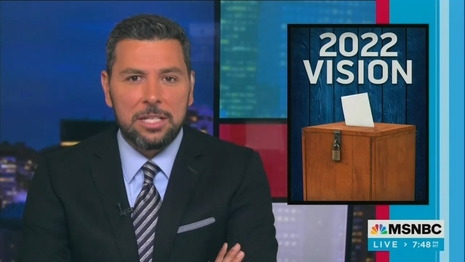 Mohyeldin said "It is rare to see Democrats in swing states actively putting guns and abortion at the center of their campaigns but this as you very well know is not going to be your typical election cycle."

Then the MSNBC host touted a "bold" new ad from Charles Booker, wearing a noose around his neck and smearing Rand Paul as pretty racist. "My opponent, the very person who compared expanded health care to slavery, the person who said he would have opposed the Civil Rights Act, the person who single-handedly block an anti-lynching act for federal law."

Even Mohyeldin had to correct the impression. "A very powerful ad there. And we should note that while Senator Rand Paul did in fact block that anti-lynching bill last year, he did go on to support a narrower version of the bill this year."

Mohyeldin then turned to Democrat pollster Cornell Belcher, asking him "Is it smart for Democrats to center issues like gun control and abortion rights in a swing state like Georgia front and center of their campaign?" Belcher said "absolutely," and Democrats have to change the fundamental dynamic of the midterm and they`re not going to do that unless they -- unless they get jarring and throw the long ball."

Belcher insisted the suburban moms should be swayed by Democrat messages "about women's right to do what happens with our body, and our ability to pass common sense gun reforms."

But when Mohyeldin asked if the Democrats should run on the idea that Republicans are going to overturn democracy itself, Belcher turned blunt:  "I'll say it like this -- if the election is about a referendum on Joe Biden and the key issue is inflation which voters are frustrated with, Democrats are going to get their tails kicked, right? It is Politics 101, he or she who defines the debate wins the debate."

These free ads and the polling analysis were made possible in part by paid advertisements by Liberty Mutual and SimpliSafe.