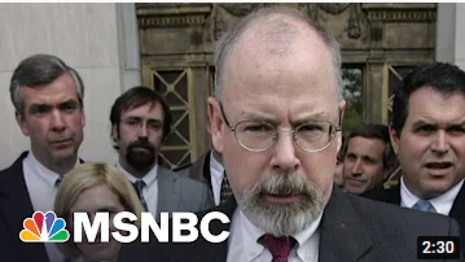 Special counsel John Durham's first trial in his investigation of the origins of the Russian collusion probe was ignored by the networks for weeks....until the accused Hillary Clinton lawyer Michael Sussmann was found Not Guilty. Then ABC and CBS pounced, and it was a "stinging defeat" and "major blow" for Durham! It makes you wonder if they would have covered a Guilty verdict.

Durham is viewed by the media as the anti-Mueller. He was appointed by Bill Barr to investigate the origins of the Russiagate scandal that put the Mueller probe into motion. So if Robert Mueller was CNN's Superman and Time compared him to Eliot Ness, then Durham was somehow Lex Luthor and Al Capone.

NPR and PBS trashed the probe as turning up nothing "shady or dodgy." It revealed the conservative media was running "debunked" theories of computer spying or snooping on Trump.

The Washington Post story on the verdict quoted Sussmann's lawyer saying "the prosecution was trying to turn a brief 30-minute meeting more than five years ago into a giant political conspiracy theory." Oh really? Doesn't that sound like the entire liberal media freakout over a 15-minute meeting between Donald Trump Jr. and some Russians at Trump Tower?