On Wednesday's Morning Edition, your taxpayer-funded National Public Radio expressed alarm at Justice Samuel Alito's "quite strident" draft opinion on abortion. He used terms like "abortionist." A guest was upset with the term "unborn children."

On this segment, the morning anchor was Leila Fadel. The guest was liberal Columbia law professor Carol Sanger (no relation to Planned Parenthood founder Margaret Sanger), author of the book About Abortion: Terminating Pregnancy In The Twenty-First Century. 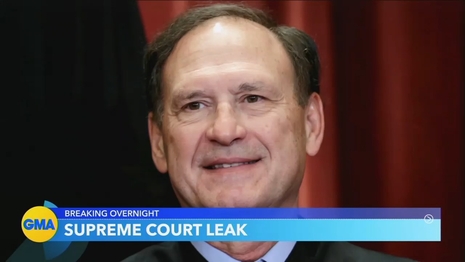 LEILA FADEL: So let's talk about this draft opinion. It's quite strident. Does this represent Alito's singular view, the view of the majority of the justices? How do we read this?

CAROL SANGER: I think you can read it safely as representing the view of the majority of the conservative justices. And it is indeed, as you said, strident, and it is aggressive. It starts out with one paragraph that says people feel all different sorts of ways about abortion, and then after that, it just sort of rips into Roe and Casey, the precedents for this case, Dobbs, and tears them apart.

FADEL: Were you surprised about the tone and language in the Alito draft? I mean, it doesn't seem at all neutral. He used terms like abortionists instead of abortion providers, and he writes, quote, "Roe was egregiously wrong from the start."

SANGER: That's right. And he points out that in the old days - i.e., before two days ago -- we called fetuses potential life in Casey and in Roe. But here now we're calling them unborn children. So that's another way of rhetorically changing how we think about what this is all about.

NPR and its liberal "follow the science" supporters want to downgrade an unborn child to "potential life" -- as in "it's life when we decide it is." They don't see minimizing the humanity of babies to be "strident" and "aggressive."

This isn't rare, for NPR to be shocked by the word "abortionist." Last October, morning anchor Steve Inskeep stopped a pro-life advocate and took exception to the term "abortionist." He said "you're using terminology that's not universally accepted." But apparently all their euphemisms are? He "mansplained" to her: "We're talking about doctors performing medical procedures that are legal under federal law, correct?"

Fadel later asked Sanger: "So if this draft becomes final and it says this issue is up to the states, would any federal law legislating abortion protections or banning them then be challenged in court?"

In another story on Wednesday, Fadel reported "states like California are working to become national havens for abortion rights."