Washington Post media blogger Erik Wemple reported some specifics of a new study on cable-news tilt – and needled CNN host Brian Stelter on how he couldn’t handle the idea that a professor would come on his CNN show and posit that CNN was a partisan filter like Fox News.

Academics David Broockman and Joshua Kalla were invited on Stelter’s show after they wrote a journal article on an experiment where they paid Fox News viewers $15 an hour (seven hours a week) to watch CNN for a month in September 2020. The viewers in the study discovered that Fox News was ignoring or downplaying news that made Republicans look bad, or make Democrats look good. Kalla told Stelter their study "established both networks are really engaging in this partisan coverage filtering. It’s not about one side, it’s about the media writ large.”

Stelter objected that this was a venture in bothsidesism. But the report has data on the discrepancy. On Sept. 15, 2020, President Donald Trump presided over the signing of normalization agreements between Israel and Bahrain and the United Arab Emirates. “After decades of division and conflict, we mark the dawn of a new Middle East,” Trump said at the ceremony.

On Fox News shows airing from 7 p.m. to 11 p.m., the news racked up 1,278 words of coverage, according to the report, while the coverage on the equivalent CNN shows clocked in at just 84 words.

Wemple said "The study’s focus on prime-time shows is logical, considering that’s where the big viewer numbers stack up," but "it does bear mentioning that according to a Nexis search, CNN did produce significant coverage of the Abraham Accords at other times and on other platforms."

It's worth asking if Stelter actually read this journal article -- which explicitly suggested CNN and Fox are both partisan. But the professors did NOT pay CNN regulars $15 an hour to watch Fox News for a month. One might imagine the lefties would demand higher pay to watch Fox!

Kalla, the professor who frustrated Stelter, had more examples of partisan differences. 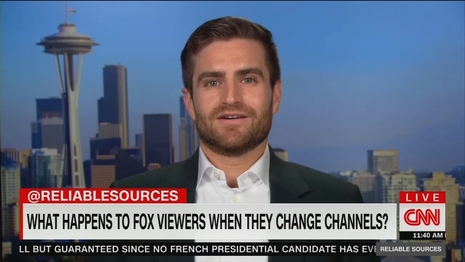 “What we’re showing is that CNN does engage partisan coverage filtering. They should be aware of that and can do better as a network,” Kalla told the Erik Wemple Blog.

Wemple concluded by citing one of the study’s respondents, who said, “You have to watch some of all the lying a-- media to get anything resembling the whole story.” This theory would also apply to reading more than one newspaper in the District of Columbia.