College Writer Who Challenged Stelter: He Had 'No Apology, No Remorse Whatsoever' for CNN 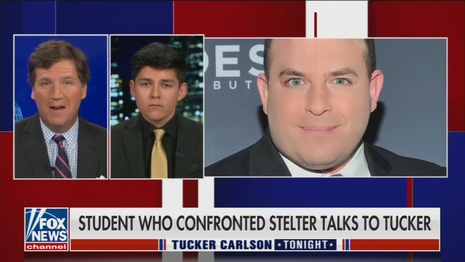 On Friday's Tucker Carlson Tonight, University of Chicago student journalist Christopher Phillips reports CNN's Brian Stelter had "no apology, no remorse whatsoever" for CNN's overwrought bias after he questioned him at a conference on "Disinformation and the Erosion of Democracy."

Phillips told Carlson that he and his two fellow writers at the Chicago Thinker newspaper saw "a ton of legacy media employees whose entire careers have been spreading disinformation. Those are the people who are telling us about how to avoid disinformation. So you know, I hear Brian Stelter, and he talks for 30 minutes about how Fox News is this huge purveyor of disinformation, they're the enemy of the people. And then I come up and I say, wait a second, run that back because actually, CNN, from what I've seen at least, is probably 10 times the purveyor of disinformation that you claim Fox News to be and, you know, he didn't really have a great answer for it."

CARLSON: Well, I just -- you know, some of the examples that you threw at him, you know, are subjective. I agreed with your take on it. But some of them were just objective, like CNN did dismiss Hunter Biden's laptop as Russian disinformation, that kid is on camera doing it. Wouldn't it have been better if he would have said: Yes, we got in -- you know, I got that wrong. You know, I'm sorry about that. Wouldn't that have worked?

PHILLIPS: And we always say, you know, keep a clean -- we tried to keep a clean record. But there was no apology. There was no remorse whatsoever. It's just, you know, I don't know what news network you're talking about. That's not mine, when in reality, he said these things on CNN. It's all documented.

Carlson said "everybody makes mistakes" and should admit it. He asked what reaction he received from other students at the university.

PHILLIPS: Well, you know, there's a lot of social pressure to conform to the leftist narrative, to conform to the radical agenda at college campuses. So just working for "The Chicago Thinker," really is, you know, kind of inviting you to be canceled, in a sense, but a lot of people I have to say, actually really liked my question. They thought it was fair. They thought it was honest. And it was pure journalism.

And I respect everyone who told me that some people were not satisfied with it. But regardless, I think I did a good thing in asking Brian, you know, what gives as to CNN's bias?

This segment was sponsored in part by Nutrisystem.