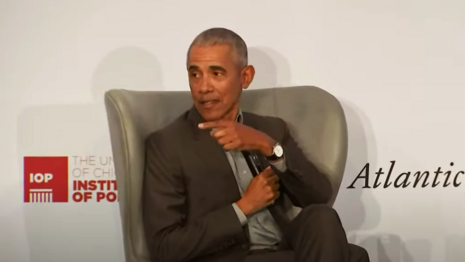 Naturally, CNN didn't find anything funny in David Axelrod and Jeffrey Goldberg honoring their hero Barack Obama with a spot at their conference on "Disinformation and the Erosion of Democracy."

This came during a week when Obama was honored for Obamacare, and the liberals all forgot Obama won the "Lie of the Year" from PolitiFact in 2013 for "If you like your health plan, you can keep it."

Usually, the "disinformation" cops and "fact checkers" think all of the dishonesty comes from the right wing. Obama was surprised after PolitiFact gave the "Lie of the Year" to "Death panels" (2009) and "Government takeover of health care" (2010).

CNN's badly disguised press release for Team Obama was authored by Dan Merica and Donie O'Sullivan under the headline:

'Birtherism' to the 'Big Lie': Inside Obama's fight to counter disinformation

Former President Barack Obama is urgently throwing himself into the fight against disinformation, taking a yearslong private fascination into the open as he makes addressing the issue a key pillar of his post-presidency.

The CNN team thinks Obama is uber-qualified because of the "infamous" birther theory promulgated by Evil Orange Man, and they aren't going anywhere near Obama making up his own fairy tale in his memoir about staying in Hawaii with Daddy until he was two (he left with Mommy for the mainland soon after he was born). He also made up "composite girlfriends," but he's the scourge of disinformation.

'Birtherism' to the 'Big Lie': Inside Obama's fight to counter disinformationhttps://t.co/y07OwmhExN

This is the perfect CNN press release. In roughly 1400 words, there are zero quotes from Obama critics, and zero mentions of anything Obama has ever said wrongly. Everyone quoted in the piece is brought in to make the case for Obama, like adviser Eric Schultz:

Eric Schultz, an Obama adviser, said the former President views disinformation as a "through line for all of the challenges we face right now," including the pandemic, climate change and racial injustice. And for Obama, Schultz added, the "arc of this issue also tracks the arc of his public life" -- while social media helped get Obama elected in 2008, the misinformation that spread on different platforms also accelerated during his time in office.

The liberals loved social media almost precisely as long as Obama did -- when it helped him get elected, it was great, and when it began to boost Obama critics, it suddenly became a horrible place for misinformation.

'Birtherism' to the 'Big Lie': Inside Obama's fight to counter disinformation

'He understands this world'

Obama, now a 60-year-old, gray haired former politician, has fully embraced the technological intricacies of the disinformation issue, according to an outside adviser who has worked in the tech industry, mostly because the former President is "naturally kind of a geek."

"It's not as though it's like this is some new-fangled, whatchamacallit that you will never see on my lawn or whatever," the adviser told CNN. "He understands this world."

For a counterpoint to Obama's "disinformation" war, see how he tried to make revisionist history with Russia at the Chicago event, by our friend Kristine Parks.