CBS Late Show host Stephen Colbert (D-N.Y.) certainly knows his audience. On Tuesday's show, he mocked Fox's Peter Doocy for asking President Biden a question, and suggested that he would like Biden to slap Doocy in the face, like Will Smith slapped Chris Rock at the Oscars. The crowd loved it. No one expects Jim Acosta to suggest that will lead to violence and even death of reporters.

COLBERT: Yesterday, President Biden held a press conference, and he was asked a ridiculous question by a ridiculous man: Fox News reporter and that one kid in high school who wears a suit to gym class, Peter Doocy. Jimmy, drop the deuce.

PETER DOOCY: When you said a chemical weapon used by Russia would trigger a response in kind?

BIDEN: It will trigger a significant response.

DOOCY: What does that mean?

BIDEN: I'm not going to tell you. Why would I tell you? You have got to be silly. (Laughter ) ( Applause )

COLBERT: Remember-- ( applause ) Yes. Remember how on last night's show I said that slapping is never, ever the answer? I'd like to file a one-time exception on behalf of the president of the United States. (Applause)

As our Briefing Expert Curtis Houck noted, Doocy was one of many White House reporters to ask Biden about his walked-back remarks about Putin being removed from power and other gaffes. Doocy here was obviously suggesting to Biden that telling Putin he would respond "in kind" to a chemical attack sounds like he would respond with a chemical counter-attack. 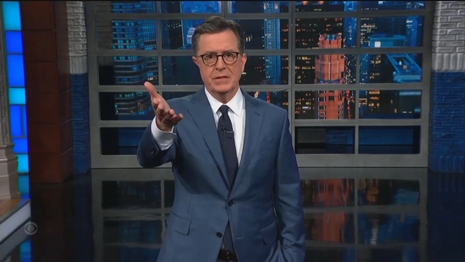 Colbert mocked Doocy as wanting all of our national-security secrets: "Uh, Peter Doocy, Fox News. I've got two more questions. First, what are the exact locations of all of America's troops? And can you give me the nuclear launch codes? Just tell me, is one of them a four?"

Apparently, Colbert's model of journalist decorum was CBS reporter Ed O'Keefe, who asked the leftist question of the day about the January 6 Democrat Committee having texts of Ginni Thomas about the 2020 election.

Colbert makes his show for Democrats, so naturally back in 2018, Colbert welcomed CNN yeller Jim Acosta on his show to honor him for being a brave member of the "enemies of the people."

Colbert's reporter-slapping "comedy" was brought to you by Crest.