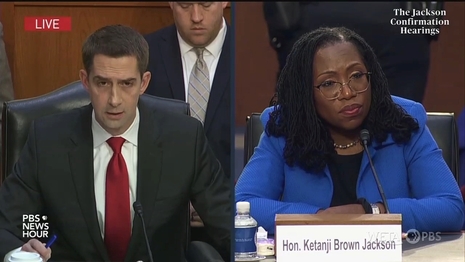 As news junkies spend the week monitoring live coverage of the Ketanji Brown Jackson confirmation hearings on cable news or on PBS, they can quickly determine that the TV anchors and analysts are lining up very supportively of Judge Jackson's "historic" candidacy. They took the position that it was horrible for Republicans to ask critical questions and launch "personal attacks," which were "bad optics" and maybe even racist.

PBS reporter Geoff Bennett was so eager that he relayed the opinion of Jackson's friends that a tweet equating KBJ with CRT (critical race theory) was "racist on its face."

MSNBC's Joy Reid dismissed Sen. Tom Cotton as "thuggish" and weirdly claimed that anyone who associated Ibram X. Kendi with CRT was "an idiot or a liar."

CNN was mystified by Sen. Ted Cruz presenting the book Antiracist Baby being taught at Georgetown Day School, where Judge Jackson sits on the board. Jeffrey Toobin through it was irrelevant. Abby Phillip called it "below the line of what is important."

Then there was the pretense that somehow radical Judge Jackson "almost sounded like a conservative," according to Jan Crawford on CBS. But this disingenuous take has been employed often by the media. In fact, Ruth Bader Ginsburg and Sonia Sotomayor were both presented by reporters as sounding conservative in the confirmation hearings -- and then their actual tenure on the Court was the exact opposite.