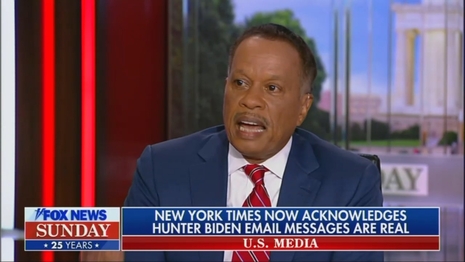 As the Hunter Biden blackout continues on the liberal networks, liberals have argued that you could never trust any Hunter scandal scoops because they came from pro-Trump sources like Steve Bannon and Rudy Giuliani. But The New York Times ruined that spin by admitting the emails on Hunter Biden's laptop left in a repair shop were real.

CNN's Brian Stelter avoided the topic entirely on his Reliable Sources show and his newsletter. But he worked at The New York Times and feels it is the pinnacle of newspaper journalism. So why skip over it? Especially when in 2020, Stelter was so quick to suggest the emails could be "made up," or be part "fakes."

Fox's Juan Williams turned a Hunter-coverage debate into a comedy by claiming "nobody said it wasn't true." No, many people treated it as untrue, from Joe Biden on down.

Philip Bump of The Washington Post appeared on Stelter's Sunday show, but wasn't asked about his piece for the Post which tried to claim that the Hunter Biden story was still shaky, lacking "context". "Was the sourcing for information sufficiently dubious to justify caution by mainstream outlets? The answer, it seems clear, is yes." Even now, they can't admit there's a scandal here.