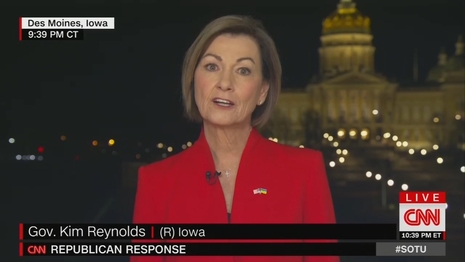 The CNN "Facts First" fact-checkers evaluated 12 claims from President Biden's State of the Union address but only found one of those that they would describe outright as "false." It looked like an A for effort. They sounded notably tougher on three claims from the Republican rebuttal from Iowa Gov. Kim Reynolds, and tagged one as false -- that "the Department of Justice treats parents like domestic terrorists.”

CNN's Marshall Cohen claimed it was previously "debunked." It is correct that the "terrorist" language was used in a letter by the National School Boards Association, and not in official memos by the Attorney General. But the NSBA letter was requested by the Secretary of Education and  they sent it to the president. Cohen defended the DOJ with passion:

The FBI’s counterterrorism division did create an internal “threat tag” called “EDUOFFICIALS” to help agents monitor investigations and intelligence assessments about illegal threats against teachers and school board officials. This is an internal organizing tool – not a nationwide dragnet to target concerned parents who speak up nonviolently at school board meetings. It’s impossible to know everything the FBI is doing behind the scenes, but this is a very far cry from the massive abuses claimed by top Republicans.

The other two checks were less angry. Reynolds said  “Many prominent Democrats still want to defund the police.” Daniel Dale insisted “This needs context,” since Biden said the opposite. But she said "prominent Democrats." The "context" is CNN has made prominent heroines out of police defunders like AOC (an hour-long documentary!), Cori Bush, and Ilhan Omar.

Reynolds said “We’ve actually gone to the border, something that our President and vice president have yet to do since taking office.”

Priscilla Alvarez ruled “Reynolds is partially correct. President Joe Biden has not been to the US-Mexico border since he was elected, but Vice President Kamala Harris did visit the border last June.” Even CNN’s Jeremy Diamond at the time described Harris’s four hours in El Paso as “dutifully going through the motions of an official visit to the border while seeking to create as little noise as possible.”

Biden claimed that "most Americans in most of the country can now be mask free. And based on the projections more of the country will reach that point across the next couple of weeks."

Facts First:  Biden is correct based on a recent change in CDC metrics, when the focus expanded from community transmission to include hospitalizations and hospital capacity.

But CDC (and CNN) are based on Science!

During his speech, Biden touted his Supreme Court nominee, Judge Ketanji Brown Jackson, and claimed that her appointment has been embraced by a bipartisan array of interest groups and legal experts.

“Since she’s been nominated, she’s received a broad range of support, from the Fraternal Order of Police, to former judges appointed by Democrats and Republicans,” Biden said.

Facts First: This is correct.